The bottom-up economics, an economic model being championed by Deputy President William Ruto in his quest to become Kenya’s fifth Head of State, has become the butt of all jokes.

Some not-so-amusing like being likened to the human’s back-side being raised in what the Secretary-General for Jubilee Party Raphael Tuju said was its loose translation to Swahili. David Ndii, an economist and supporter of the Deputy President, responded by saying that the model is “about getting dynastic crony-capitalist cartel butts off HustlerNation.”

He added: “Ni kukataa kukaliwa” (It is about refusing to be exploited). ANC Party Leader, Musalia Mudavadi, described bottom-up approach as drinking from the bottom of a bottle which leaves nothing for the public.

In some instances, it has appeared like just another catchy political slogan, whose definition and specifics, have eluded the minds of its ardent champions like Alice Wahome, the MP for Kandara Constituency.

Despite the jokes, it appears that the bottom-up approach is turning into the wedge dividing the political class going into the 2022 elections. Its proponents insist that this is a revolutionary system that will fundamentally transform the economic fortunes of millions of ordinary Kenyans.

The people at the bottom of the pyramid —the hustlers who include the mama mbogas and jua kali artisans—have been consigned in poverty by a divergent economic model in place known as trickle-down economics.

Its critics have noted that the proponents have largely been superficial and have not offered the public any concrete plans on how they intend to implement it. Others have dismissed it as a utopian proposal whose sole aim is to hoodwink voters.

Mr Ndii reckoned that the fact that people are having this conversation is in itself encouraging. But what exactly is bottom-up economics. Ndoho Wahoro, the Chief Executive Officer of Euclid Capital and former head of Debt Office at the National Treasury, says the best way to define the bottom-up approach is by contrasting to trickle-down economics.

Trickle-down postulates that if you grow the economy, even if it favours the top one per cent including big companies, the expectation is that the benefits will ultimately flow to the lowest part leading to economic growth and employment in general economy.

“Bottom-up is where you create economic rules focusing on the bottom end, in terms of Wanjiku,” said Wahoro.

The bottom-up approach, he says, has very little to do with the government or politicians providing goodies to the public but creating an enabling environment for the small and medium enterprises to thrive.

This includes coming up with policies that decriminalise hawking; reduces the burden of taxation to SMEs; allowing small businesses, especially the millions in the informal sector, access cheap credit from financial institutions.

Some of these policies, Billow Kerrow, former Senator of Mandera County and KANU’s shadow finance minister in the ninth parliament, said while the bottom-up approach is ideal, it will take some time before it takes shape.

For it to work, there is need for change in the mindset of policymakers such as Treasury mandarins who believe that this economy is about the modern sector, the industries, and banks. “Those are the guys whose views determine the government policy to a large extent,” said Mr Kerrow.

Additionally, because the bottom of the pyramid comprises largely the informal sector, who do not have security to access credit, the government will need to underwrite their loans so that banks can give them loans without fearing that they might default.

Dr Samuel Nyandemo, an economics lecturer at the University of Nairobi, said that the bottom-up approach cannot be implemented in a county where there is high inequality with those at the bottom having the skills to even manage their own businesses.

“What people need to know is that Ruto is targeting the middle class as a carrot to hoodwink them to vote blindly in anticipation that the utopian concept will earn him votes,” said Nyandemo. “But as an economist, I can tell you frankly that given the situation as it is right now in Kenya, that model is of no consequence to the common man,” added Nyandemo.

The majority of the people at the bottom, he noted, are quite miserable financially. “They don’t have even skills of initiating and managing small-scale businesses, it will require a lot of public awareness and civic education.”

He said with political will, the trickle-down economics can be restructured by creating a layer in the middle and try to pump resources from where they will be able now to jumpstart the economy as a plane that is accelerating to take off and then the fruits will start trickling down.

Wahoro is afraid that the bottom-up economics as is being suggested by politicians might be one in which government largesse are directly pumped to those at the bottom, a situation that is not very different from the donation of wheelbarrows and motor-bikes and fundraising cash which have been common with the Ruto camp.

“When they talk about bottom-up economics, one of my concerns is what they will ensure that government largesse is delivered to the bottom-end of the economy. Which, at least in my view, is the worst possible way to go about it because it does not allow for the efficient allocation of resources.”

The government, Wahoro says, should not directly confer benefits and, in any case, should get out of business, as it is not good at efficiently allocating resources. 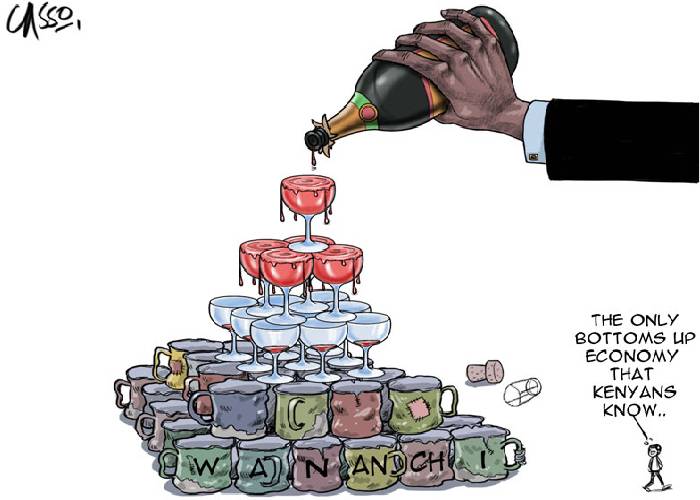 There is a consensus even among the political class that there is a need to focus on the ordinary Kenyans, most of whom eke a living in the ubiquitous informal sector, particularly agriculture which is the mainstay of Kenya’s economy.

Unfortunately, most of those in these businesses have not been able to share in the national cake with the government, particularly the current one, channelling most of its money to mega infrastructural projects in which small businesses and individuals have had no stake.

Failure to address the issue of corruption will also see policymakers continue to be obsessed with the large infrastructural projects which have decent kickbacks.

The current government tried to cure this problem by insisting that a certain portion of government tenders be given to youths, women and people with disabilities.

“One of the most effective ways of bottom-up is simply what Kibaki did. Make credit cheap and available so that Wanjiku doesn’t need a million collateral documents to secure credit.”

Kerrow says that the country could come up with a policy in which banks undertake to lend a certain fraction of their money to SMEs as a condition of setting shop in the country.

Some people say that the surest form of bottom-up approach was devolution whose aim was to ensure that resources were channelled from the national government to the grassroots.

“Devolution is the only tax that the government pays to a third party other than debt repayment. It is compelled to pay it by the Constitution,” said Wahoro.

Moreover, in both the current and former governments, there has been some mixture of a trickle-down and bottom-up approach.

For example, rural electrification in which homes and businesses in the rural areas have been connected to the national grid has helped those at the bottom in a major way.

The bottom-up approach is not uniquely a Kenyan debate, with Nyandemo noting that it has been very popular in a lot of Asian countries.

In the US, there is a divide in the Democratic Party where there is a faction that favours some kind of building from the middle, while there is the low-tax, pro-business wing.

Four ex-police officers charged with the murder of British aristocrat Alexander Monson will know their fate on October 28.

The Constitution of Kenya (Amendment) Bill (National Assembly Bill No. 40 of 2020) has endorsed to have the president appoint his Cabinet Parliament.
Share this story