The impeachment motion against Wajir Governor Mohamed Mohamud has been linked to internal wrangles in Jubilee party and the 2022 succession battles.

It is also emerging that support for and against the handshake and the Building Bridges Initiative (BBI) has created political factions in Wajir County and the larger northern Kenyan region.

The governor and his deputy are avowed political foes. The MCAs’ move was in defiance of the official position of Jubilee party headquarters, which had sanctioned them against impeaching Governor Mohamud.

In a confidential letter dated April 21, 2021, signed by the Jubilee Party Secretary-General Raphael Tuju barred party MCAs against participating in the impeachment.

“All Members of the County Assembly of Wajir County shall not sponsor, second or support or participate in an impeachment motion against the Jubilee Party’s elected governor,” reads the letter.

The letter further note; “In the interim, the office of the Secretary-General is open to receive confidential dossiers or petitions against the conduct of the governor whereafter, such a motion may be approved or sanctioned.”

Wajir Senator Abdullahi Ali Kabreta has also supported the governor’s impeachment. Dr Kabtreta has declared his interest in contesting for the gubernatorial seat in 2022.

The political wrangles and impeachment are now seen as a precursor to 2022 politics. It is worth noting that the MCAs also ignored a court order barring them from debating the impeachment motion. They also voted to extend the sitting to midnight to allow them enough time to discuss the matter.

Interestingly, there was drama outside the county assembly after lawyers representing Governor Abdi were locked out as they attempted to serve the MCAs with the court order.

A Meru High Court had suspended the impeachment until Thursday when it is expected to issue directions on a case the governor has filed.

Meru Presiding Judge Justice Edward Muriithi ordered the assembly to halt the intended process until both parties appear before him Thursday afternoon.

The petitioners had also urged the Speaker and his team be restrained from presiding over the process pending hearing and determination of their application.

They told the court that the county assembly was about to debate a defective impeachment motion. 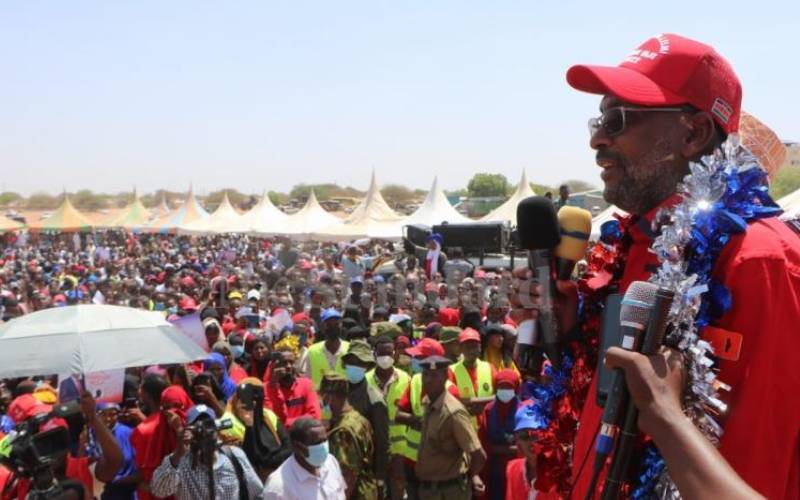 Elmi, Ahmed get elders’ backing in negotiated deal
Elmi and Abdullahi are seeking to unseat Mohamed Mohamud who was two weeks ago reinstated by a Meru high court after he was impeached in 2021.
Politics
By Moses Nyamori
3 months ago
.