National Assembly to have special sitting to debate BBI 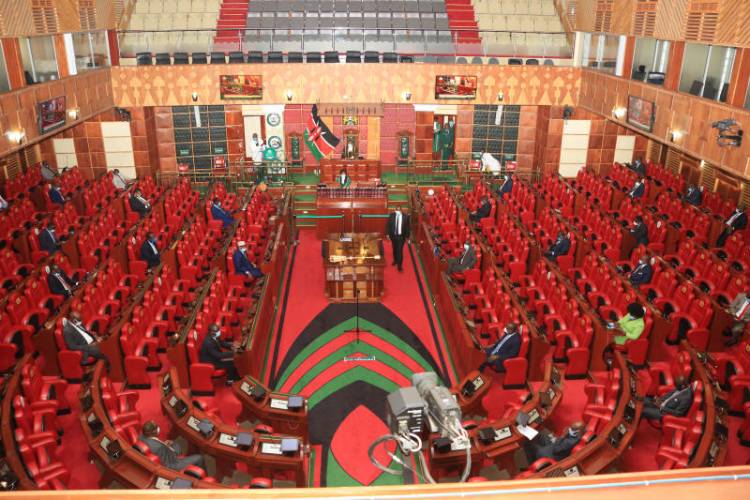 The National Assembly will hold a special sitting on Wednesday and Thursday to debate the Constitution of Kenya (Amendment) Bill, 2020 (BBI) among other matters.

The decision came a few hours after the Justice and Legal Affairs Committee (JLAC) submitted their report on the Building Bridges Initiative Bill to both Houses.

Mr Kimunya stated that the House will finalise the Division of Revenue Act (DoRA) and other matters on Wednesday and debate the Bill on Thursday.

“We also have a few other things we need to finalise like DoRA and another three items then the Bill. We will start with the very clear ones, get rid of them and then work on the BBI on Thursday,” he said.

Even though the National Assembly Majority leader is confident that the Bill can be taken through its second and third reading on Thursday, any delays will lead to further debates of the Bill next week on Tuesday when the House resumes from recess.

Kimunya denied talk of conspiracy stating that it would be unconstitutional to delay the Bill.

“Article 257 basically says a popular initiative Bill will be presented in the House without delay. Since the report is out and it’s what we were waiting for, there is no reason for delaying another one week,” explained the majority leader.

“We are not just doing the sitting for BBI. There are time-bound issues like DoRA, we need to clear IT before Treasury formally presents the estimates on Friday,” added Kimunya.

Other issues to be discussed include the approval of Prof Fatuma Chege who was cleared by a parliamentary committee after being nominated by President Uhuru Kenyatta as Principal Secretary under the Ministry of Education.

The Senate is yet to confirm whether it will also have a special sitting even though there was a push for both Houses to table the report at the same time.

“I can’t confirm if there is a special sitting because a special sitting must be initiated by the Leader of Majority and the concurrence with 15 members of the Senate. If not then we will table it and discuss it when Senate resumes on May 11," said Senate Speaker Kenneth Lusaka.

“This is the very first time that Parliament has been given the task of midwifing a Bill coming from the people of Kenya as a popular initiative under article 257 of our Constitution. As members of the committee we have done the best we could and now the task shifts to the two houses of parliament,” said Omogeni.

The Bill could be headed to a bumpy ride following divisions between factions allied to Deputy President William Ruto and ODM leader Raila Odinga over the second schedule on the role of the Independent Electoral and Boundaries Commission (IEBC).

The leaders clashed over the proposed 70 constituencies in the BBI. JLAC criticized the BBI’s attempt to suspend provisions of article 89(4) of the Constitution which states that “If a general election is to be held within twelve months after the completion of a review by the Commission, the new boundaries shall not take effect for purposes of that election.”

The suspended article thus allows the new constituencies to apply in the 2022 elections, an issue that is considered unconstitutional.

In March IEBC chairman, Wafula Chebukati while presenting views during the public participation said the allocation of constituencies is the mandate of the commission and not politicians.

Making Safaricom more agile as it transitions from telecommunication to a technology company is turning out to be Ndegwa’s way of charting his path.

The closure of hotels and curio outlets has also seen orders fall significantly.

By Nzau Musau | 8 hours ago

By Patrick Beja and Benard Sanga | 21 hours ago