Kalonzo: Mzee Moi told me to work with Uhuru and Gideon for unity 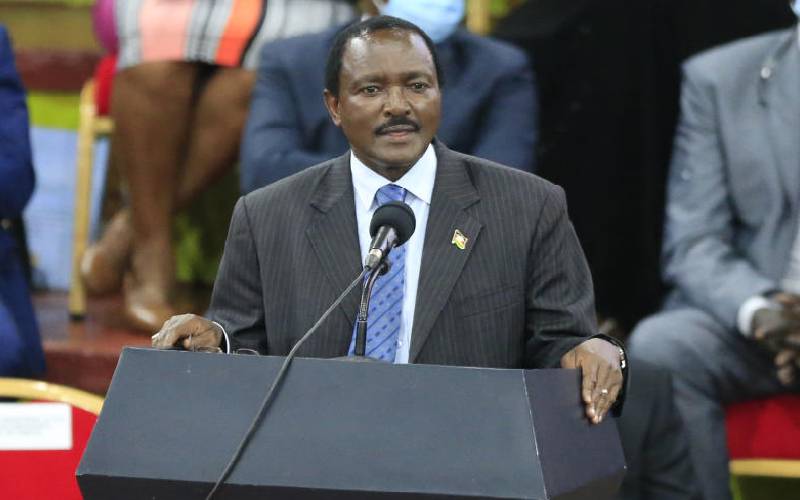 Speaking in Mbooni, Makueni County on Saturday, Mr Kalonzo, who made several stopovers in Mbooni town, promised locals the goodies the BBI basket held as the Constitutional Amendment Bill (2020) goes to county assemblies.

“Do not accept this wheelbarrow agenda. You can never sell wheelbarrow economics; it does not make sense. In BBI we are saying it is a bottom-up approach because the money goes to the people,” the former vice president said.

He accused Ruto of spreading propaganda about the BBI and termed him an anti-development leader.

“When you refuse to have money trickle down to the people, then how can you say you will serve them with wheelbarrows to uplift their living standards?" Kalonzo posed.

At the same time, the Wiper leader said the DP was insincere to the president, having jumped off his ship after serving for eight years in government.

“We are together with President Uhuru Kenyatta. Before Mzee Moi rested, he called me and said, 'Kalonzo, Gideon and Uhuru, work as one team'. Then he rested. So when you hear me talk with this confidence, I know what I am saying. He also told me to ensure peace in South Sudan,” said Kalonzo.

He termed those antagonising him in Ukambani political dwarfs whose ambitions were bound to fail.

Kalonzo, who settled for a funds drive to raise money for the construction of Seventh Day Adventist church at Kilyungi, Kithungo/Kitundu, Mbooni West in Makueni County, said his time for the presidency was ripe and nothing would distract him.

“We are taking home this presidency. This is the turning point for the Kamba community and everybody must be ready to take this,” he said.

By Willis Oketch and Patrick Beja | 9 hours ago