I will support you for the top seat, Isaac tells Ruto

Former Bomet Governor Isaac Ruto, a fierce critic of Deputy President William Ruto, yesterday appeared in a function attended by the country’s second-in-command and pledged to support his 2022 presidential bid.

Isaac, the Chama Cha Mashinani (CCM) party leader, has been drumming up support for the Building Bridges Initiative (BBI) and was among the initiative’s pointmen in the wider Rift Valley region.

In November, he was among party leaders who attended the official launch of the BBI Bill signature collection drive at the Kenyatta International Convention Centre in Nairobi.

The Deputy President, who has been lukewarm about the initiative birthed by the handshake between President Uhuru Kenyatta and ODM leader Raila Odinga in March 2018, was absent at the function.

Isaac said he had a ‘handshake’ with the Deputy President and asked Bomet residents to support him (Ruto) for the presidency and his own quest to become the governor of Bomet.

“I will support you (Ruto) for the top seat, as I also go for the governor position,” said Isaac of the new relationship.

While endorsing the DP’s bid, Isaac said his change of heart was informed by unfair political wars targeted at the DP. “We have decided to work together so that you succeed in your quest in 2022 and also unite the region”.

He, however, was non-committal about joining the United Democratic Alliance (UDA), a party affiliated with the DP, instead saying that they would deliberate over time.

On his part, Ruto criticised the proposal for a rotational presidency which is being championed by Raila, saying Kenyans are not interested in tribal politics.

The DP said he supported President Kenyatta and that they had collapsed 13 parties into one because they wanted to unite Kenyans under Jubilee so that they would serve every citizen.

“Those people have now become desperate; now they want us to elect people using a lottery-like system of this tribe and that, instead of looking at the qualities of a leader and their manifesto. They want a leader from this or that ethnic group,” said Ruto.

The DP explained the dangers of a rotational presidency, saying it would turn the country into tribal enclaves and stifle development.

He accused his opponents of attempting to scare his supporters in a bid to bully them into submission, but vowed not be cowed.

“You are not going to sell us fear, and blackmail and intimidation; you cannot force us to do what you want and when that fails, you bring the Directorate of Criminal investigations (DCI), the anti-corruption body or raise tax issues. Let’s respect each and not set the DCI, EACC or KRA to bully us; Kenya belongs to all of us,” said Ruto.

The DP went ahead to bemoan the happenings in Jubilee, saying the same forces were intentionally weakening the party.

“The ruling party has become a pale shadow of itself because of an intentional plan to destroy it. It is very sad that all the efforts we put into the process are now going to waste. Jubilee cannot even participate in by-elections because it has been weakened,” said Ruto.

He questioned the future of Jubilee, saying the party’s recent moves to pull out of all impending by-elections was a sign it was falling apart.

The strength of a party, he said, is tested when it is expanding its territory and winning more seats, but Jubilee has no such plans.

“Meetings now being held at the party headquarters are not to plan for the party’s progress, but to punish and or kick out party officials and members,” he claimed yesterday. 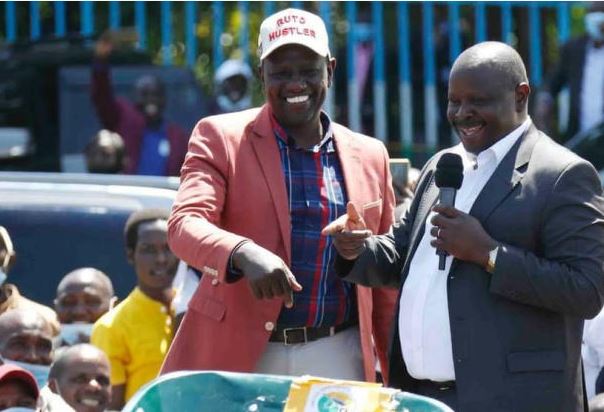 The DP has been associated with the newly re-branded UDA, and yesterday taunted those, “who thought we would run out of options” after killing Jubilee that they have something better.

He also took a swipe at Wiper leader Kalonzo Musyoka, challenging his development record after being in Government for nearly 40 years.

The DP was responding to Kalonzo, who on Thursday accused him of dishing out his entire 2013 Cabinet slots to one community.

Ruto said he will not be derailed and would push the wheelbarrow and hustler narrative until it becomes a big debate in the country.

“Kenyans know that the priority is to get jobs to the youth and empower the poor; not looking at which tribe has been in power and who will not lead it,” said Ruto, who was accompanied by several MPs allied to him as well as governors Hillary Barchok (Bomet) and Kericho’s Paul Chepkwony.

In Ndanai Constituency where the DP led a harambee in aid of boda boda riders, East African Court Judge Charles Nyachae said that he was opposed to the BBI.

“We will ask the DP not to be bothered with the anti-BBI campaigns; I will lead it myself,” said Mr Nyachae.

Isaac said his decision to support the DP had been inspired by the need to bring the Kalenjin community together for posterity.

He said he was open for talks with the Deputy President to draw up a workplan. “This is the first engagement and we are open for talks on how we will work together,” the CCM leader said.

“It is good Isaac has made up his mind and come back, and it will only be wise to fold CCM and come fully to the hustler movement,” said Mr Murkomen.