Ruto lays ground for No campaign with new demands

In what was interpreted as a staggered approach to opposing the proposed constitutional amendments, Deputy President William Ruto and his allies have issued fresh demands.

A week after skipping the launch of signature collection for the Building Bridges Initiative (BBI) report at KICC, Nairobi, Ruto emerged yesterday blowing hot and cold on the provisions of the Constitutional (Amendment) Bill, 2020.

Leading 170 leaders including seven governors, 146 Members of National Assembly and Senate, the DP praised and condemned the provisions in equal measure while saying a referendum was not a priority.

He pushed for consensus on BBI and called for a multi-choice referendum to coincide with the 2022 General Election.

Ruto demanded that the monies slotted for the referendum be re-channeled to economic recovery and the fight against Covid-19.

“It is never too late for those who care for this country, we should not be simplistic in this matter, the country belongs to us all, there is no hurry to have a national referendum,” said Ruto shortly after MPs allied to him read a long-winded statement, in turns.

Among the issues he picked in the BBI is the independence of the Judiciary, the size of government, and the manner of allocating the 70 additional constituencies. He maintained that although the proponents of the initiative had considered some of his demands, there was room for more.

Ruto said vote for the 2010 Constitution with a YES and NO choice was understandable given that the people were deciding if they wanted to continue with the old or adopt a new Constitution.

But he explained that the BBI report was amending a number of issues in the Constitution, and the people should therefore be allowed a multi-choice referendum.

“We can accommodate everybody’s views in this process, then we should not force Kenyans to vote for something they do not want. Let them get an opportunity to decide on what issues they went for the country,” said Ruto.

The DP asked proponents of the document to consider the issues raised and republish the Bill after consensus had been reached.

Earlier in the meeting, the leaders were divided with one camp calling for a NO campaign, another took a wait-and-see stance, as yet a third group preferred to be indifferent on the matter and instead continue with the hustler empowerment projects.

While BBI has proposed the removal of Women Representatives and instead said the group be pushed to the Senate, the DP’s allies want them retained in the National Assembly so that there would be a total of 94 in the bicameral House alongside elected women in the constituencies.

The leaders argued that Parliament numbers will have reduced by at least 60 and have more members elected by Kenyans.

Citing the Covid-19 pandemic, poor economy, high national debt and gaps in public financial management, Ruto allies took issue with the prioritisation of BBI and preparations for a referendum campaign in the prevailing environment.

In their 12-page resolutions, they said BBI proposals do not meet the publicly declared objectives of the Handshake of uniting Kenyans and ensuring that elections will not be violent, and instead were a major clawback on the gains of the 2010 Constitution.

The DP faction questioned the wisdom of spending Sh14 billion in a referendum a year before an election that will cost another Sh42 billion going by the 2017 figures.

They noted that more attention should be directed to address runaway corruption, political intolerance, impunity and disobedience of court orders by the Executive.

The resolution acknowledged that the deepening financial quagmire has led to the destruction of livelihoods, businesses and loss of jobs and shrinkage of revenues.

“Additionally we are haunted by the reality that we are yet to create confidence in our education system’s ability to make schools safe enough for our children to resume school because the myriad challenges facing the entire school system remain largely unaddressed,” the leaders said.

Jumwa said there are prospects of the country reaching a consensus on BBI proposals.

“We emphasise our long-held and firmly maintained position that we must avoid contentious, win-lose, divisive or acrimonious referendum that holds the potential to breed hate, ethnic polarisation and conflict,” said Jumwa.

On the outstanding issues, the resolution noted that judicial independence must never be undermined.

“We submit, therefore, that there still remains room for the ombudsman’s appointment mechanism to be reviewed and agreed upon and for the appointment of the ombudsman by the Judicial Service Commission or the Chief Justice,” the resolution read.

The team welcomed the proposal to create 70 constituencies but said IEBC should vary the proposed electoral units by up to 2 per cent.

This, they said, would capture the most expansive, arid and largely marginalised areas including Garissa, Nyeri, Wajir, Nyandarua, Kitui, Kisii and Migori.

They said whereas the affirmative action and equality in representation were important principles and there was a progressive attempt to address them, the outcome of the current proposals was that combined with nominations required to meet the two-thirds gender rule in accordance with Article 81, the size of Parliament will now increase from 416 seats to as high 640.

The team said most of their concerns and interests of ordinary people have found their way to the main table and are part of the national conversation.

“Article 11A mainstreams the hustler economy as well as the mandatory requirement for the president to make a report on the status of the achievement of economic and social rights. This proposal will safeguard the protection and the actualisation of critical interests of the agricultural and Hustler Sectors,” said Ruto.

He noted that within one year, the legislation on Guaranteed Minimum Return for all farmers of maize, coffee, wheat, tea, cashew nut, green grams, fish, livestock, potatoes and cabbages, which is a vital anchor for productivity in agriculture and food production, will be enacted as will be legislation for the establishment of Livestock Marketing Authority.

“Similarly, legislation on a fund to support the hustlers economy - micro, small, medium enterprises fund and the entire wheelbarrownomics economic ecosystem will be enacted,” said the leaders.

He said the document proposes to increase the allocation of resources to counties from 15 per cent to 35 per cent for development at the grassroots.

By Micah Sali | 3 hours ago 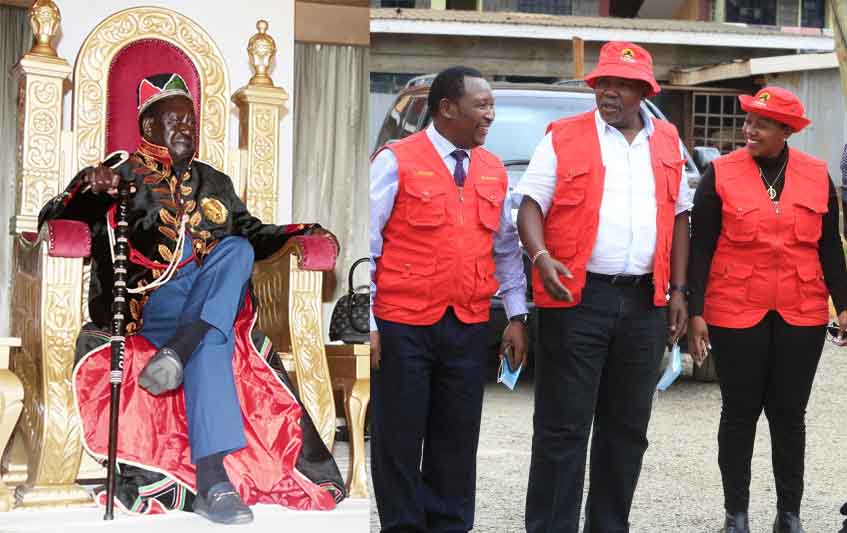