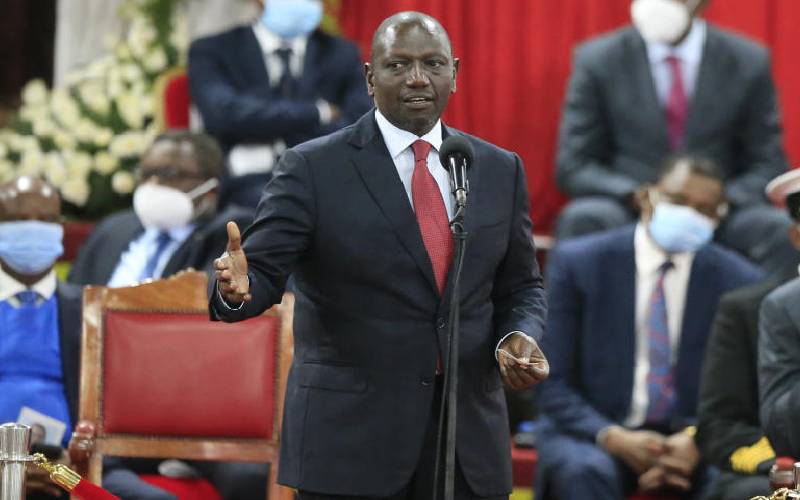 ANC party has called on Deputy President William Ruto to declare his stand on the proposed constitutional changes.

The Musalia Mudavadi-led party said the lukewarm position was taken by Dr Ruto (pictured) on the Building Bridges Initiative (BBI) report was causing confusion in the country.

Kakamega Senator Cleophas Malala and Lugari MP Ayub Savula yesterday led the calls for Ruto to make his position known to the public.

“You said that you are a scientist, but you are taking too long to decide. Come on board and support BBI. Your unclear stance is causing confusion,” said Mr Malala.

He asked the DP to stop claiming he was involved in the changes made after the unveiling of the report at Bomas of Kenya.

“Ruto was not part of those involved in the changes to the report. He was not there,” said Savula.

The DP has been sending conflicting signals on his position on BBI report. He did not attend the launch of signature collections in Nairobi last week, which was presided over by President Uhuru Kenyatta and ODM leader Raila Odinga.

Later, the DP tweeted that he was happy that some changes had been made and went ahead to indicate that he had a duty to support his boss, Uhuru.

“I’ve a constitutional duty to assist my boss.... We’ve made an improvement to BBI post-Bomas. Now working on consensus for Kenyans to have real choices to decide/vote while avoiding yes/no, all/nothing division. We avoided lose-lose, we can overcome win-lose to achieve win-win,” he tweeted on Saturday.

Yesterday Mr Mudavadi called on leaders to abandon their hardline stances and support the proposed changes, lashing out at some, who he accused of “spoiling for a fight".

He asked leaders to wait for the 2022 General Election to face off rather than use the BBI to cause division among Kenyans.

“High octane politics will force the government to spend billions of shillings to improve its security arrangements. If tension is lowered, the money for excessive security can be used for other purposes such as health to fight Covid-19 pandemic,” Mudavadi added.

Previous article
Leaders say referendum Bill timelines to delay 2022 poll
Next article
Over 1.5m sign up to back reforms