Leaders push for changes to BBI document before vote 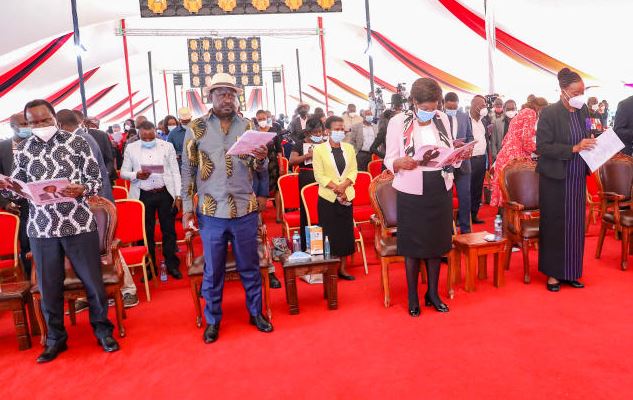 The push by leaders to alter the Building Bridges Initiative report picked up steam yesterday after it emerged that President Uhuru Kenyatta and opposition leader Raila Odinga (above) may be amenable to changing the document.

Raila was inundated with demands for changes during the burial of former Committee of Experts chairman Nzamba Kitonga, days after a meeting with party leaders where he appeared to suggest that the document could be improved without clawing back hard-fought gains.

Another meeting between Raila and the Council of Governors (CoG) did not yield fruits after they failed to agree on some of the contentious articles, including governors’ opposition to having running mates of the opposite sex, and revenue flow to the counties.

The 47 governors will be in Naivasha today to deliberate on the proposals before being joined by Kenyatta and Raila either on Monday or Tuesday. Kenyatta is currently on an official visit to the Vatican City.

“We are prepared to make the compromise so that we can move forward. Two steps forward, one step backward. We are still advancing. What is at stake here is much more important,” Raila told mourners.

But even as they demand change, the political leaders have veiled interests. While Deputy President William Ruto is keen to be seen to have extracted concessions, Raila’s camp does not want to appear to be backing down and wants the DP to make good his threat to oppose the document.

The DP’s allies are also not keen on a contested referendum, which they fear could drain their energy and resources, and derail their roadmap for the 2022 presidential contest.

Yesterday, Raila flatly rejected calls to engage Ruto on the document. “I agree on exclusivity, and the deputy president was mentioned. But I am not the president. The president is his boss. They are in Cabinet all the time and they can talk. If Uhuru wants to talk to him and he does not agree, si shauri yao? Where do I come in?” Makueni Governor Kivutha Kibwana had demanded that everyone should be involved in the search for consensus while Wiper leader Kalonzo Musyoka called for a non-contested referendum.

Ruto, in the meantime, was also talking about consensus at a bride price ceremony for Nakuru Senator Susan Kihika in Marmanet, Laikipia County.

Ruto allies led by former Agriculture Cabinet secretary Mwangi Kiunjuri said they would support the document only if it addresses issues affecting the common mwananchi.

At the burial in Kitui County, Woman Representative Irene Kasalu said they do not want to go to the Senate. Kitui Senator Enock Wambua demanded that Mwingi be granted county status otherwise the BBI report would have a hard time sailing through.

At a meeting hosted by President Kenyatta at State House on Wednesday, pressure mounted on the pair to agree to change the document.

Yesterday, CoG chair Wycliffe Oparanya said they were pushing for amendments on some sections touching on devolution. “We had a meeting but we never concluded the issues. We have scheduled another meeting in Naivasha on Monday and Tuesday that will be attended by Uhuru and Raila.”

He continued: “As governors, our focus is mainly on devolution and how funds will flow. Obviously there are a number of issues that we need to amend and Uhuru is on record saying that there is room for improvement. Raila also said the document is not cast in stone.”

A document prepared by the council has listed enhancing the Senate by making it the Upper House as one of the issues they want addressed.

They are also seeking to have Article 218 of the Constitution changed to compel the Controller of Budget to release funds to counties in the absence of the County Allocation Act. They further want the CoG secretariat anchored in the Intergovernmental Relations Act.

“The CoG proposes for gender parity in representation. However, it does not propose the running mate of every candidate for the position of governor being the opposite gender,” reads the draft proposal.

Another county boss said they were seeking to have the section on the running mate amended so they can pick their deputies after winning elections. They also want the power to sack their deputies.

“There is this issue of having a running mate from the opposite gender. We don’t have a problem with it but we want a provision where governors will identify their deputies once elected.

“When you are forced to pick a woman as running mate and she does not complement your campaigns, it will become a burden to those running for the governor seat,” he said.

Lugari MP Ayub Savula, a close ally of Mudavadi, also claimed that Keyatta had agreed during his meeting with party leaders that some of the contentious issues could be amended.

Savula said that with an agreement to look into the powers of the Senate and the appointment of the Judiciary Ombudsman, his party was ready to back the proposed changes.

“As ANC, we are very happy with the decision to open a window for consensus-building. The move has killed the narrative that this BBI was about Uhuru and Raila. It is a Constitution for all Kenyans,” he said.

Suna East MP Junet Mohamed, however, has maintained that there is no room for amending the document, saying that time is long gone. The lawmaker, who is a close ally of Raila, said the only opportunity remaining is for the people to give their verdict on the report at the referendum.

“That document will not be opened because we cannot have two years of discussions then turn around and say there is need for more discussions. Where were these people when Kenyans were giving their views? It is time to give the people an opportunity to decide on the document by either approving it or rejecting it. This is not the time to massage people’s ego,” Junet said.

Kioni: Why Jubilee will not have candidates in upcoming by-elections
Politics
By Winfrey Owino
28 mins ago
World Cup fans find booze at hotels, Qatar's 1 liquor store
Football
By Associated Press
32 mins ago
How Bondo's thrilling nightlife experience awakened Siaya
NEWS
By Isaiah Gwengi
50 mins ago
Five healthy foods you should always have in your kitchen
Living
By Esther Muchene
1 hr ago
.

By Winfrey Owino 28 mins ago
Kioni: Why Jubilee will not have candidates in upcoming by-elections