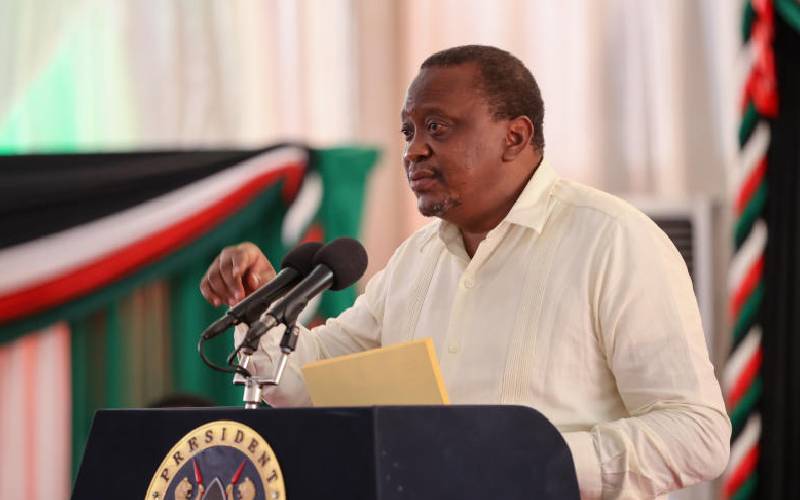 President Uhuru Kenyatta (pictured) has commended the Church for being at the forefront in driving socio-economic and political change.
He said the Church has over the years played the role of holding the political leadership to account and encouraged the clergy to continue being the country's "conscience".
“You are out there to save souls but you are also there to ensure the will of your people is followed and committed by their leaders.
“And I want to encourage you that you shouldn’t stop that but continue because as my father used to say, ‘You the church are indeed the conscience of society’ and we need you at the very forefront to ensure we who have also been given the mandate by the people to execute on their behalf," the President said.
President Kenyatta spoke on Sunday at All Saints Cathedral in Nairobi where he joined Anglican faithful in marking the 50th anniversary of the Anglican Church of Kenya.
The ACK traces its roots to the arrival of Anglican missionaries at the Kenyan coast in mid 19th century. The first Kenyan ACK bishops were consecrated in 1955. Five years later, the Anglican Church of Kenya became part of the Province of East Africa. Fifty years ago, in August 1970, the Anglican Church of Kenya became an independent province of the Anglican with the late Archbishop Festo Olang as its head.
At the celebration service conducted by Archbishop Rev. Dr Jackson Nasoore Ole Sapit, President Kenyatta said the Anglican Church is inseparable from the Kenyan society, as it has greatly contributed to the growth of education, health and other key social sectors of the country.
“The Anglican Church is inseparable from Kenyan society. You are part and parcel of society and history of this nation. Not only have you been involved very heavily in not just spreading the gospel but also participating in education, in health and many other activities that have gone to improve lives. I can say without fear that the church has been at the very centre of the social, economic and political history of our country.
“You have played a central role in the social, economic life of this country and have been instrumental in ushering in changes that have made Kenya a better place,” the President said.
He reiterated his Government's commitment to continue partnering with the church in service delivery particularly in youth development initiatives across the country.
The President commended Archbishop Ole Sapit and the church for committing to train and teach Kenyans on how to improve their lives by working and serving one another.
“I am truly grateful because of the sermon you have given today because you have touched the very nerve, what we should be doing, not just as a church but as a society.
“The recognition that our role is not to give but rather to teach our people to fish, to teach our people to live decent lives, to teach our people to not only be God fearing but also to know the spirit of service to their fellow men,” the President said.
The Head of State congratulated the ACK for the stringent Covid-19 protocols they had put in place during such an important celebration saying the rest of the country needs to take lessons on the fight against Coronavirus from the church.
In his sermon, Archbishop Ole Sapit urged Kenyans to avoid the culture of negative competition and commit to values of service which he said would go a long way in building a great nation.
The President was joined at the special church service by Cabinet Secretaries   Fred Matiang’I (Interior), Margaret Kobia (Public Service & Gender), Sicily Kariuki, (Water & Sanitation), Kajiado Governor Joseph Ole Lenku and the Head of Public Service Dr Joseph Kinyua among other senior Government officials.