DP Ruto: Raila still bitter with IEBC for not declaring him president 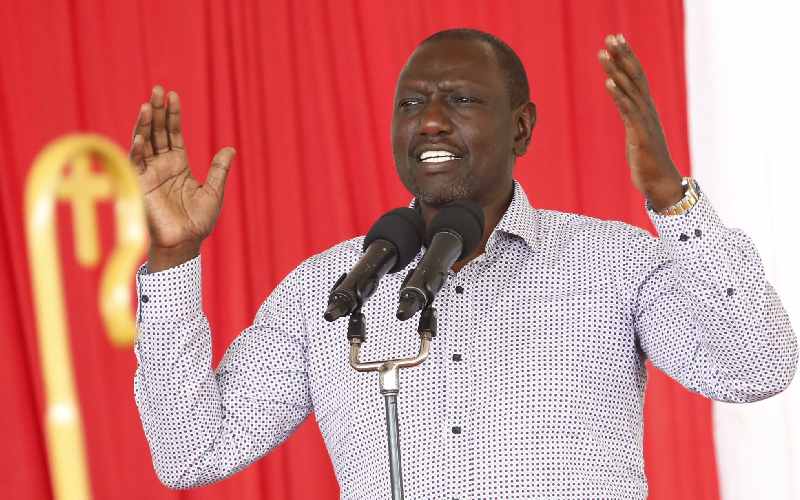 Speaking on Friday when he addressed a public function in Mathioya, Ruto (pictured) cautioned politicians against interfering with independent commissions.

“Let them leave Judiciary, the police and IEBC alone, they are independent bodies,” he said.

Ruto said Raila was still bitter with IEBC after it failed to declare him president in 2017 yet he didn’t win the election.

He said the commission does not vote and wondered why the ODM leader had declared war on it.

Ruto said Raila think by disbanding the commission, he will get a friendly one that will declare him president in the next election even if he does not win.

“He (Raila) has dismantled three IEBCs in past because he wants one that will declare him the winner even if he doesn’t have votes,” Ruto said.

He said if the ODM leader was concerned about the cost of a referendum, he would ensure there is consensus so that the Building Bridges Initiative (BBI) proposals can be passed without taking it to a divisive vote.

On BBI, Ruto warned against threats and chest-thumping and called for dialogue to avoid a divisive referendum.

“We don’t want threats and chest-thumping, we don’t have a problem with it, let them include these things we have raised so that we pass it together without any contestation,” he said.

The DP accused some unnamed people in Nairobi of trying to block his tours across the country saying he was elected by the people and cannot abandon them.

He said he will continue visiting Mt Kenya region because it voted for them in the same ticket with President Uhuru Kenyatta.

“There are some fools shouting in Nairobi that why is Ruto going to Mathioya yet you people voted for President Uhuru and me in the same ticket,” he said, adding that he is only doing the job he was given by Kenyans.

The DP told those who are opposed to his hustler movement which seeks to empower small people, saying the country belongs to everyone both eth rich and the poor.

“There are people who get mad when I talk about hustlers they should stop it because small people also need to be empowered.”

Raila on Thursday called for the disbandment of the commission over their projected Sh14 billion referendum budget which he termed as outrageous.

He said IEBC estimated cost for the planned referendum was a confirmation that elections in this country had become an avenue for a rip-off by those in charge of the electoral process.

Chebukati, however, responded to Raila’s statement unfortunate and lacks objectivity and understanding of the conduct of elections.

By Ndungu Gachane | 9 hours ago

Jubilee in race to formalise coalition pact with ODM party

Ruto: I would have appointed the six remaining judges
Feedback