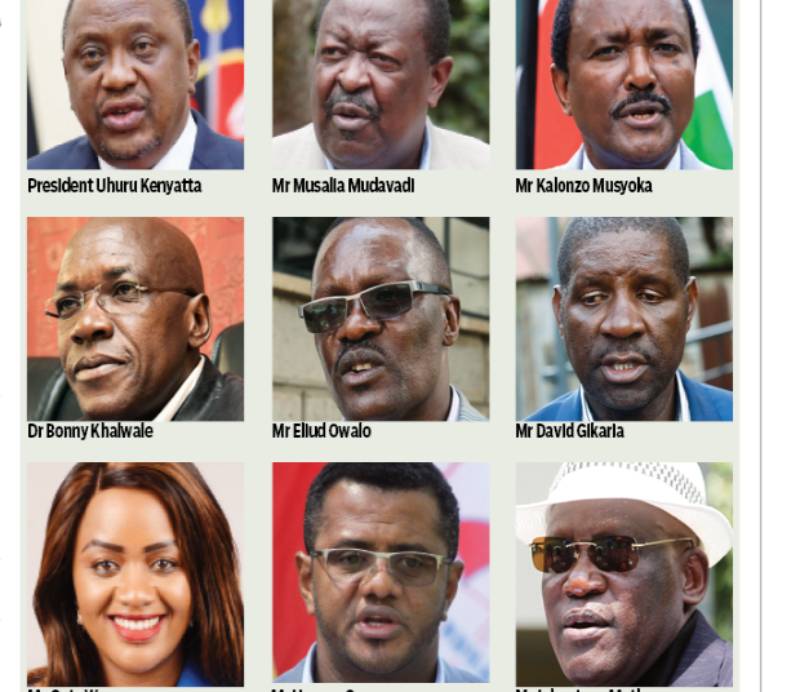 The heightened political activities ahead of the 2022 presidential election have revealed our politicians to be unapologetic flip-floppers who seek their fortunes as the wind blows and the tide flows.

Accusations of flip-flopping sank Mudavadi’s presidential dream in 2013, and the same problem doomed Kalonzo in 2010 during referendum campaigns that gave birth to the new Constitution.

Kalonzo became the butt of jokes and he was branded a ‘watermelon’ for failing to take a clear and decisive stand on the referendum.

In a surprising twist, Uhuru’s sudden decision in 2007 to decamp as the official opposition leader to chief campaigner of President Mwai Kibaki had no lasting backlash.

In 2012, Uhuru and Ruto staged a legendary U-turn when they scrapped an agreement with Mudavadi to hand over the presidential ticket, in trust, to him. Before Mudavadi knew what was happening, he was left clutching at thin air.

Flip-flopping in politics can be deadly for presidential candidates. Case in point is Mudavadi on the Building Bridges Initiative (BBI) and Kalonzo on the last constitutional referendum.

University of Eldoret senior lecturer Philip Chebunet says changing your stance can make you seem unprincipled and calculating. “But sometimes politicians can get away with it if it’s done right,” the political analyst said.

There’s an art to the U-turn and Mudavadi has mastered it. Depending on the issue, the key is always to make your reasons seem genuine.

In January this year, the ANC leader was opposed to a BBI meeting at the Bukhungu Stadium on the grounds that it was meant to give Raila and his ODM party political mileage.

Always afraid of making a misstep, Mudavadi said the meeting had little to do with seeking consensus on meaningful constitutional changes. It was ill-motivated, he argued, and targeted at whittling down his influence in western Kenya.

He tore into the organisers and wondered how the event was expected to conduct an expert briefing on the BBI report to more than 30,000 people. But come January 18, the day of the rally, Mudavadi was among leaders who attended and even addressed the crowd at the stadium.

“I am a Kenyan and your son ... I am here to dispel rumours that I don’t support the BBI report because I have been involved since the launch of this process,” he told the gathering.

Media reports indicated that a phone call from President Kenyatta on the eve of the meeting convinced Mudavadi and Ford Kenya boss Moses Wetang’ula to attend the forum.

While Kalonzo’s ‘watermelon’ tag has refused to go away, few know the origins of the disparaging name.

In 2010, during the second ‘Yes/No’ constitutional referendum campaign, Kalonzo supported the draft document. He was in the ‘Yes’ team symbolised by the colour green, which was helmed by President Kibaki, Raila, Musalia and Uhuru.

The ‘No’ team’s colour was red and it was led by Ruto and Information minister Samuel Pogishio. After members claimed that Kalonzo was openly supporting the draft constitution but secretly opposing it, he was labelled a watermelon fruit that is green on the outside and red on the inside.

The tag has been further cemented by Kalonzo’s perceived ‘on the fence’ approach to political issues. The latest incident was when the animatedly suggested that he would have no qualms supporting Uhuru beyond his 10-year term limit.

The remarks were taken to mean he was advocating for the abolition of presidential term limits, with Kenyans wondering whether the Wiper leader was rooting for a dictatorship.

During a TV interview, Kalonzo backtracked when he said he would never suggest that Uhuru be given a third term as President.

At pains to explain himself, Kalonzo said that if the Constitution was amended to expand the Executive, there would be a government of national unity after the 2022 General Election.

“You cannot rule out Uhuru in that arrangement,” he said, adding that he was talking about allowing Uhuru to take up the proposed position of prime minister.

The flip-flop term does not bother Mr Owalo, Raila’s former campaign manager who jumped ship to Mudavadi’s Amani National Congress party last year before bolting for the exit in August.

During a meeting at the DP’s Karen residence last month, Owalo said he would support Ruto’s presidential bid. The reason he gave for quitting ANC was the need to allow Mudavadi the latitude to make ‘critical’ decisions ahead of the 2022 presidential race.

“We need a decisive, progressive, responsive, all-inclusive and participatory leadership anchored on people-centric values like social justice, recognition of human rights guided by the rule of law, and responsiveness to the challenges facing the common mwananchi,” he said.

Dr Khalwale, a former fierce critic of the DP turned ardent supporter, shocked many when he declared his support for Ruto’s presidential bid two years ago. He now serves as Ruto’s point man in western Kenya and harbours no regrets.

“Ruto has always been on the winning side in Kenyan politics. That is why I decided not to waste my time elsewhere,” he said.

The latest entrant to this club is Ms Waruguru, who ditched Ruto to join Raila’s handshake team. Then there is Nakuru Town East MP David Gikaria who has been a die-hard supporter of Ruto since 2013 until he recently found himself in the crosshairs of the government.

Mr Gikaria ditched Tangatanga a month later for team Kieleweke in a move calculated to put him in the State’s good books.