Sudi surrenders to Eldoret police, to be charged with hate speech

Kapseret Member of Parliament Oscar Sudi has surrendered at Langas Police Station in Uasin Gishu County this morning putting an end to his dramatic search for arrest over the weekend.

The legislator announced this development through his Facebook post stating that he is a law-abiding citizen. Sudi further claims that sending a heavily armed contingent of police officers to his home was an unnecessary move by the government.

“As a law-abiding citizen, I have presented myself at Langas Police Station early this morning even before the officers arrive. It was unnecessary to be treated with a lot of drama by sending a contingent of police officers to my home. I was away the time police arrived at my place. Thank you all for standing with me,” he said.

In the OB reports, the MP, who was on the run for the better part of Friday and Saturday refuted claims that he had received summons from the police regarding his utterances.

Police reports indicate that Sudi is wanted for hate speech, which is under investigation by the National Cohesion and Integration Commission.

This is after he made remarks deemed abusive towards President Uhuru Kenyatta and his family recently, to which he vowed that he would not apologise over his utterances.

The legislator played a hardball even after the Deputy President William Ruto lashed at his statements saying that he and Emurua Dikirr MP Johana Ng’eno could have chosen respectable words to criticise the head of state.

Mr Sudi has lined up a group of lawyers that will take to court to defend him over the impending charges. 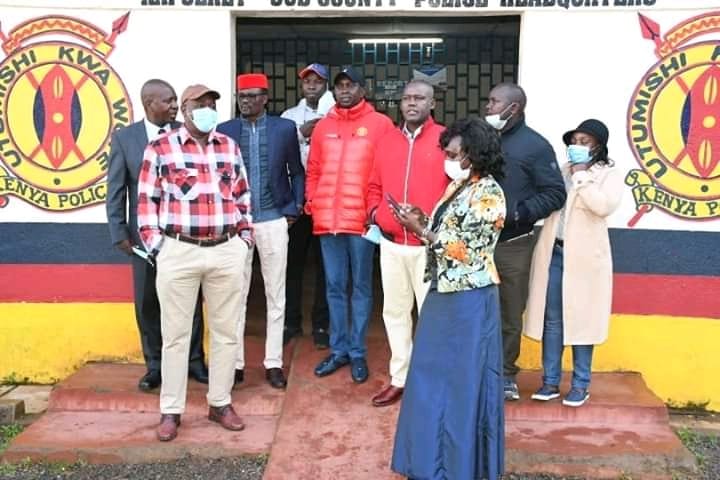 On Friday, a standoff ensued after police claimed that occupants of the residence refused to open the gate. Officers were forced to gain entry through the fence of the compound.

During the standoff between police and residents, a GSU officer was hacked on his right hand with a machete, while one man was also shot in the shoulder and five others arrested.

The police report further indicated that at least three officers later confirmed to be working with the Presidential Escort Unit were found inside the compound.

Two Presidential Escort Unit officers are said to have engaged their colleagues in a scuffle before they were apprehended. Those arrested are expected in court tomorrow to face various charges, police aware of the plans said.

On Friday the MP held a demonstration in Eldoret town streets stating that he will continue to advocate for a just society despite calls to him to apologise for disrespecting the First Family.

“No one will silence us. You do not see me addressing anything just for the sake of it. We have the freedom of expression in the Constitution and no one should intimidate us,” he said.

Sudi had earlier taken to social media to dare police to arrest him over the remarks.

The MP reportedly sneaked out of his home in the company of a police officer from the presidential escort team.

A source said he had been traced to a house in Nairobi, but police were restrained from proceeding there because they would cause “embarrassment” to the owner.

“We know where he is hiding and we are avoiding embarrassment on the owner. It is a shame he is hiding there yet he has been daring police to go and arrest him,” said an official aware of the development.