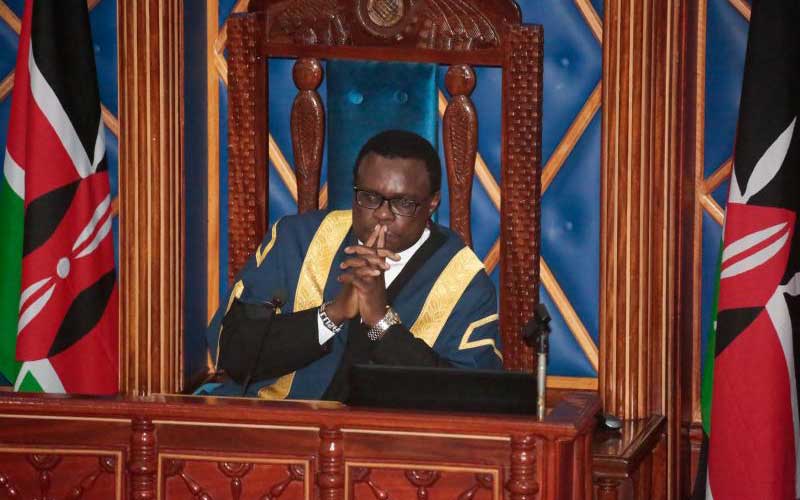 Senate Speaker Ken Lusaka (pictured) has been faulted for his management of Tuesday’s Senate sitting that had been called to allow senators find a middle-ground on how money should be shared among the 47 counties.

Lusaka faced the wrath of members who were pulling in opposite directions as he attempted to call the House to order, forcing him to abruptly adjourn the session that dragged on late into the evening.

“I sit as your Speaker. Some are anxiously talking so much but I have given you latitude. Let’s respect each other. Let’s engage each other with respect and decorum,” he pleaded.

Senators who are opposed to the third generation formula that was proposed by the Commission on Revenue Allocation (CRA) and modified by the Senate Finance Committee have repeatedly accused Lusaka of bias during the often acrimonious debates.

The Speaker's critics allege that he is pushing a pre-determined agenda hence the reason he has been flouting the House standing orders when he finds himself in 'unfamiliar territory'.

On July 23, Lusaka unceremoniously adjourned the House resulting in a backlash from the senators, who shouted "Shame! Shame! Shame!" as he left the chamber.

This also happened on Tuesday when the House passed a procedural motion by Vihiga Senator George Khaniri that extended the sitting until curfew time.

Senators Johnston Sakaja (Nairobi), Susan Kihika (Nakuru) and Aaron Cheruiyot (Kericho) said procedural issues on adjournment should not be ignored and warned Lusaka not to be dragged into plans by Siaya Senator James Orengo to stall the vote.

The Speaker faced resistance in his efforts to call the House to order when Orengo and his team sought for more time to deliberate on an amendment by Nominated Senator Petronilla Were to retain the status quo until the State increases allocations from Sh316.5 billion to Sh348 billion.

Members ignored Lusaka's calls of "Order! Order! Members! I am on my feet!" and continued with the caucusing.

“We have before us a very important debate. Looking at the requests here and given that we have two more amendments to go, and given the ruling I gave two weeks ago, it's not practical that we can be able to conclude this matter,” he said.

The Speaker interrupted the sitting of the House late in the evening as senators raised procedural issues.

“I order that we reconvene on Thursday (today) to look at the two amendments and make a determination on the main motion," he ruled, adjourning the House despite exhortations by Cheruiyot and Sakaja to follow the House rules.

Elgeyo Marakwet Sentor Kipchumba Murkomen yesterday inquired on Twitter whether today's meeting was still on as Mutula collected signatures to have a meeting on Monday to deliberate on the matter.

“I have requested for a special sitting because the House resolved to sit once a week on Tuesday. The Speaker adjourned the House unprocedurally, and you cannot assign yourself the standing orders."