You’re on your own, ODM tells Kalonzo, trashes pact claim 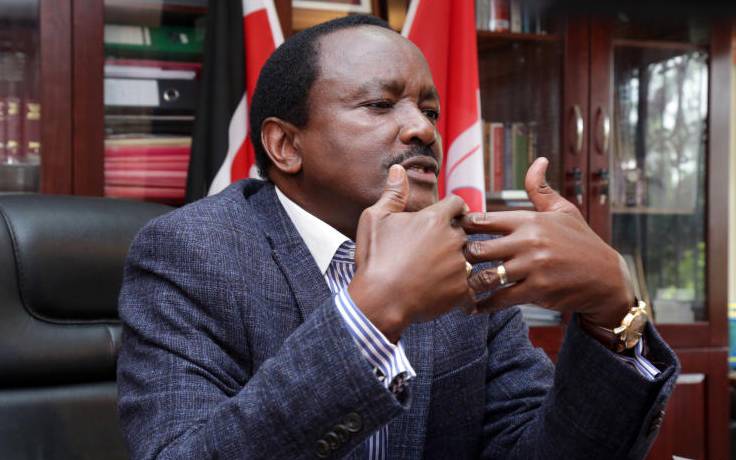 The Orange Democratic Movement (ODM) has dismissed claims by Wiper party leader Kalonzo Musyoka (pictured above) that there is a secret pact compelling ODM leader Raila Odinga to support him in 2022.

In a statement sent to media houses by ODM Secretary-General Edwin Sifuna, the Orange party maintains that there is no political deal between Raila and Kalonzo after the latter and other NASA principals skipped Raila's January 30, 2018 swearing-in ceremony.

“ODM is shocked by claims made by Musyoka that there exists a secret pact between him and Odinga that will see Raila support him in 2022. We wish to state categorically that no such deal exists,” the statement read in parts.

In a hard-hitting statement, ODM has accused Kalonzo of being a treacherous character who likes whining to reap where he did not sow, adding that the Wiper party leader is known for his kati-kati brand of politics.

“These claims are typical of Mr Kalonzo's character as a two-faced treacherous character who is always whining while seeking to reap where he did not sow. It is a continuation of his “ kati kati” brand of politics,” said the ODM Secretary-General.

He said ODM rejected attempts by Kalonzo to bulldoze Raila and ODM as a party to commit to such pact as part of NASA coalition agreement and left it open for the party to support any of the partners in the event the coalition was renewed in 2022.

“Kalonzo tried to push Raila to commit to supporting him in 2022 as part of the NASA pact and as a party, but we flatly rejected that demand,” he said, adding that the so-called deal therefore only exists in Kalonzo's wild dreams.

Sifuna said that contrary to claims that ODM has been frustrating NASA and its coalition partners, it is Wiper and other coalition partners that stopped funding the NASA secretariat leaving the Orange party to shoulder the burden alone.

“It is a fact that for a whole year after the 2017 elections, ODM single-handedly financed the NASA Secretariat, including paying staff salaries. That was because Wiper and all the other NASA parties refused to submit the Sh10,000 monthly payment of their elected leaders to finance the Secretariat.”

He reiterated that NASA died after Kalonzo, Moses Wetang’ula and Musalia Mudavadi failed to attend the 2018 swearing-in ceremony at Uhuru Park despite promising to attend.

“The trio led by Kalonzo were responsible for NASA’s death after skipping the swearing-in of its presidential candidate despite having committed to be present,” he added.

Sifuna said it was wrong for Kalonzo to drag ODM into his political games, claiming that he was seeking a coalition agreement with Jubilee after ODM betrayed Wiper.

Sifuna said ODM owes Kalonzo nothing and urged the Wiper party leader to chat his own political path, saying the Orange party had moved on.

“As a party, we challenge Kalonzo to man up, stop whining and be able to stand up for something for once. ODM and Raila owe Kalonzo nothing. As a party, we have moved on and we are not planning our politics around Kalonzo.”

He cautioned parties and political leaders seeking to work with Kalonzo to prepare for blackmail and extortion with nothing in return,” he said.

“We feel it is our duty to advise anybody or party seeking to work with Kalonzo to know that they will come to know nothing but singular misery from that association. They will be harangued, blackmailed and extorted at every turn as their new "partner” pushes for goodies for himself and his close relatives.”

Wiper party boss in an exclusive interview with Daily Nation lifted the lead on the mysterious pact with ODM leader but failed to unearth the inner details of the deal.

Kalonzo said the arrangement did not involve other parties like Amani National Congress and Ford Kenya but was between him and the former premier.

“You cannot just assume that since I was the deputy to Raila, then ODM has to support me…These things have to be done expressly, which is what we have done under a separate arrangement that I can’t disclose at this stage. The arrangement is between Raila and me and not with the other parties in NASA. I am not free to talk about it because it is a highly confidential matter,” said Musyoka.

The development comes amidst mixed relations among the parties that operated under the NASA Coalition.

ODM, Wiper, Ford Kenya and ANC have been pursuing different political interest after the 2017 General Election that was soon followed by the handshake between President Uhuru Kenyatta and ODM leader Raila Odinga.

While ANC and Ford Kenya leaders Musalia Mudavadi and Moses Wetang’ula have dissociated with Jubilee Party; ODM is working with Jubilee with Wiper entering into coalition agreements with the ruling party.

But while speaking Daily Nation, Kalonzo accused ODM of relinquishing the NASA interest and jeopardising the arrangement of sharing Political Parties Fund for the coalition.

“The critical issue had we met would have been to work out a formula for sharing funds from the Political Parties Fund. We did various things to try to have a meeting. I remember the four us — myself, Mudavadi, Isaac Ruto and Wetang’ula — coming together to ask our friend in ODM to convene. But it did not work out. Now, if you cannot have a meeting of the leadership of a coalition, then there cannot be an effective coalition,” he said.

This has prompted the ODM colleagues to call on them to drop the parliamentary committee positions they earned under the banner of 2017 NASA Coalition agreement.

11 records Messi has broken this season despite Barcelona struggles