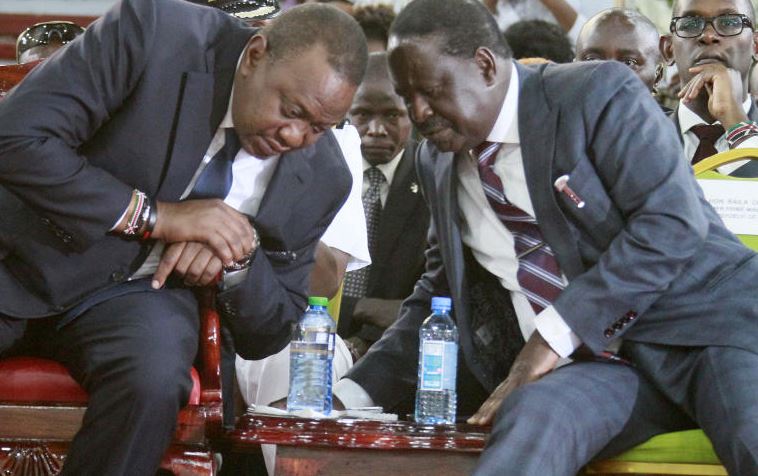 The Sunday Standard has reliably learnt that Uhuru is set to convene a Senate Jubilee Parliamentary Group (PG) meeting on Tuesday morning, ahead of the crucial vote scheduled for the afternoon.

Inside sources told the Sunday Standard that the political storm over the proposed third-generation formula by the Commission of Revenue Allocation (CRA) to share Sh316.5 billion among the 47 counties prompted Raila to cut short his vacation in Mombasa and return to Nairobi today.

Sources said Raila would hold talks with Uhuru’s allies to try reaching a consensus amid accusations that ODM was not rallying its senators to support the formula backed by the government.

Stung by the resistance from their new allies, a senior Jubilee official said the party's PG would also reach out to the rebel wing associated with Deputy President Dr William Ruto, sending a message that reconciliation between Kieleweke and Tangatanga factions was on the table.

“Raila will be meeting some party officials and the leadership of Parliament from Jubilee and ODM to try and reach a consensus to avert a government defeat on Tuesday,” said the official.

Uhuru is also expected to engage county bosses on Monday during the governors' summit, days after divisions emerged at the Council of Governors (CoG) meeting on the stalemate. During the meeting, governors censured CoG chairman Mr Wycliffe Oparanya for failing to take a stand on the matter.

Jubilee has warned that BBI is at stake if the formula fronted by the Executive is rejected with ODM's assistance.

“We thought BBI was all about ‘one man, one shilling.' That’s the philosophy underpinning the committee's proposal," said Majority Whip Irungu Kang'ata.

“We shall bite the bullet. There shall be no more adjournment of the debate. We shall reconsider BBI if we lose the vote. If the government loses vote, BBI collapses,” said Kang'ata.

Kang'ata questioned why ODM senators were opposed to the proposed revenue sharing formula while still insisting that they were backing BBI.

“The BBI proposes we devolve 35 per cent of the national revenue. This way no one loses. The government has decided that if it loses the vote, the handshake and BBI will collapse,” he said.

The government plans to have the formula passed so that the focus turns to BBI, which will ensure more money goes to counties.

“On Tuesday, if senators from Nyanza, Coast and Northern Kenya gang up against the proposal on the revenue sharing, we shall consider the proposals spelled out in the BBI,” Kang'ata said yesterday at Kiamara, Murang'a County, as he distributed relief food to poor families.

He said BBI proponents should support equitable sharing of resources, based on the population, to enhance development.

“If you support BBI, you should also be part of the proposal on the revenue sharing formula, if there is no sinister motive,” Kang'ata added.

But ODM chairman John Mbadi read political blackmail in Kang'ata's sentiments, and warned that this would not solve the standoff. According to Mbadi, ODM senators opposing the cash sharing plan had not been whipped to do so.

“Our party has not held a meeting because we have largely left it to our senators to look at the proposed parameters,” said Mbadi.

“I don’t know what connection the standoff has to do with the BBI. Senator Kang'ata cannot speak to people with that kind of blackmail. The senators need to listen to each other to come up with the best formula. It should not be about giving ultimatums," he said.

“As a party, we have support across the counties and they are affected differently (by the new revenue sharing formula). Some are gaining, others are losing. The best way out is for senators to stop the grandstanding,” said the Suba South MP.

He admitted that there could be external influence on the matter.

"Revenue sharing is a political issue, and you expect all manner of interests from all quarters,” Mbadi said.

“This is about making the national cake bigger after BBI is passed. We are for the ‘one man, one shilling’; this formula will pass,” said Murathe.

“This issue of losers and winners is neither here nor there. With the new formula and BBI’s proposed increment from 15 per cent of the national revenue to 35 per cent, counties will get double the allocation,” he said.

The impasse on the formula to replace the second generation one that has since expired has led to a delay in the passage of the County Allocation of Revenue Act, 2020, and held back the cash disbursement schedule for counties.

Counties, which are yet to receive their June allocation, are staring at a cash crisis. National Treasury CS Ukur Yatani insists without the County Allocation of Revenue Act, disbursements for July and subsequent months will be frozen.

“Treasury cannot release money to counties unless appropriated by Parliament, and for that matter by the Senate through the County Allocation of Revenue Act, which is currently facing challenges. We have no idea as at now how much money will be allocated to each of the counties,” Yatani told Sunday Standard.

Laikipia Governor Ndiritu Muriithi argues that Treasury can invoke Article 219 of the Constitution, on transfer of equitable share to counties, which stipulates: “A county's share of revenue raised by the national government shall be transferred to the county without undue delay and without deduction, except when the transfer has been stopped under Article 225 on financial controls.”

Further, Muriithi argues that the law allows disbursement of up to 50 per cent of the previous year's allocation to prevent county operations from shutting down.

The governor argued that counties spent about 50 per cent of their budgets on health, which is a devolved function, and that it would be unfair to withhold funding at a time Covid-19 infections were increasing.

"Treasury has no legal hurdles. They are simply creating excuses. They have no intention to give counties cash in the near future. The blood of Kenyans will be on their hands," Muriithi said.

According to the governor, counties are owed arrears totaling more than Sh30 billion.

“The proceedings of Tuesday are prima facie evidence of high stakes in the process,” said Kilonzo Jnr.

Irungu, Senate Minority Leader James Orengo and Baringo Senator Gideon Moi were tasked by Speaker Ken Lusaka to lead negotiations to try and strike a deal on the disputed formula.

Kanu Secretary General Nick Salat also said external influence could not be ruled out as each region fights to get more resources.

Salat said some of the financial and political issues raised in the controversy would be resolved by the BBI, which seeks to increase allocations to counties.

“The key thing is to build trust and understand that the formula may not be perfect, that is why we have the BBI,” said Salat.

“We expect BBI to look at these kind of financial and political impasse we are experiencing. Lack of trust is what is building this division. The senators have the weekend until Monday to come up with a solution,” he said.

“The proposal by the committee is supported by the many, as regions will get money according to their needs,” said Nduati.

Economic expert Jevans Bigambi argued that the Public Finance Management (PFM) Act required that release of funds must be facilitated by law.

He faulted the legislators and the Attorney General (AG) for failing to push for an amendment to cure the consistent challenges faced every financial year whenever the division of revenue law is not passed on time.

He said senators pulling from different directions did not address the problem and urged them to agree instead of allowing the matter to take a political angle.

He said the governors could also engage Yatani to have their monthly allocations released.

“These challenges were not anticipated, and this impedes on operations in the counties. The people should not be denied services because of a stalemate in passing laws every start of the financial year,” argued Bigambi.

The analyst argued that based on own source revenue, only Nairobi, Kisumu, Mombasa and Narok counties could raise the bare minimum revenue to operate outside the national shareable allocation.

“Over 60 per cent of the counties allocation goes to healthcare service and salaries. With the Covid-19 mitigation measures, these counties cannot meet the 10 per cent bare minimum to operate. These counties can only raise 0.1 per cent and 0.2 per cent,” he said.

Ken Okoth, who died on July 26, 2019, after a battle with colorectal cancer, was serving his second term as Member of Parliament for Kibra.

By Allan Mungai | 11 minutes ago

By Stephen Rutto | 11 minutes ago

By Julius Chepkwony and Godfrey Oundoh | 11 minutes ago