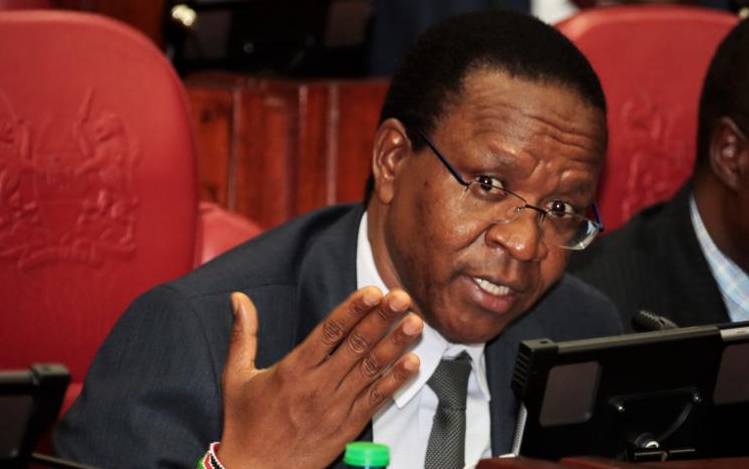 Interior Principal Secretary Karanja Kibicho could become a casualty of the political storm triggered by the impeachment of Governor Anne Waiguru.

Yesterday, Kibicho (pictured) fought off claims that he had a hand in the June 9 vote by MCAs against the governor, with whom he has had a long-running feud related to governance affairs in their Kirinyaga home turf.

Kibicho is one of the most powerful men in President Uhuru Kenyatta’s inner circle.

His influence is demonstrated by the constant accusations by the Tanga Tanga wing of Jubilee that he’s among top officials in the president’s office frustrating Deputy President William Ruto.

But with the claims that he’s working for Waiguru’s downfall, Kibicho, in an ironic twist, finds himself sharing the blame with the Ruto camp that is openly pushing for the governor’s ouster.

The most recent battle between Kibicho and Waiguru was over the controversial Sh15 billion Kenya Medical Research Institute project in Kirinyaga.

“I have heard these allegations. People should stop deep sea fishing. It is now a public thing and has generated public interest, even reported in the media. I want to face my accusers and settle this matter,” Kibicho told The Standard.

President Kenyatta has reportedly raised the issue with the PS, as he sought to know if civil servants were engaged in politics, especially in Kirinyaga.

“Uhuru was concerned about the developments in Kirinyaga and sought to know why and how. He got all the answers he wanted and made his decision,” a highly placed source told The Standard yesterday.

Insiders aware of the political intrigues told The Standard that Governor Waiguru was up against powerful individuals inside government and her Mt Kenya backyard.

“The governor has burnt bridges. The people going after her are not me and you,” said an MP who didn’t want to be named.

There were reports of how “resources” were mobilised before the MCAs moved to impeach Waiguru.

Yesterday, a day after Senate Minority Leader James Orengo claimed that those prosecuting the governor were not MCAs but somebody “from outside”, Kibicho sought to know if the pronouncements were directed at him. He said he is not the one.

He questioned why he should be linked with everything happening in his county, saying he cannot engage in fruitless ventures.

“How can I start a fight with an officer from the ruling party that I serve? Waiguru is a Jubilee governor. I work for the Jubilee government,” he stated. He went on: “I can’t start fighting the system. I have no intentions to do so whatsoever.”

Kibicho dared those linking him to the governor’s troubles to table evidence of his involvement.

“I will not deal with rumours and innuendos. I want those accusing me to come out and speak publicly. I want to deal with this matter to its logical conclusion,” he stated.

“I believe the MCAs of Kirinyaga are independent and can work without external interference, same as the Senate. How do I come in,” Kibicho posed.

“I also have the right to defend myself from baseless accusations and rumours. I come from Kirinyaga County but have never declared interest in politics and I have no intentions to do so. I am a public servant. Why would I engage in local politics? To gain what?” the PS questioned.

“It’s two years to the polls. I should have started campaigning if I wanted to join politics. People must carry their own cross instead of dragging in my name,” he said.

Senators who voted to have a committee hear Waiguru’s charges of violation of the Constitution, gross misconduct and abuse of office claimed the governor was being crucified for falling out of favour with some individuals in government.

“Today some people have danced so well, they’re not looking for justice...they are looking for someone’s head. And that head is not for Salome, that head is for somebody,” Senator James Orengo said.

He added: “Waiguru’s head is being sought not by the County Assembly. I can tell you and I have evidence of people who are looking for Waiguru’s head.”

Kakamega Senator Cleophas Malala, who was elected yesterday to chair the 11-member committee to interrogate the particulars of the charges, also claimed they will not allow external interference.

But Elgeyo Marakwet Senator Kipchumba Murkomen insisted Waiguru’s case should go the plenary way, saying the people of Kirinyaga have been duped.

By Mireri Junior and Timothy Kariuki | 5 hours ago