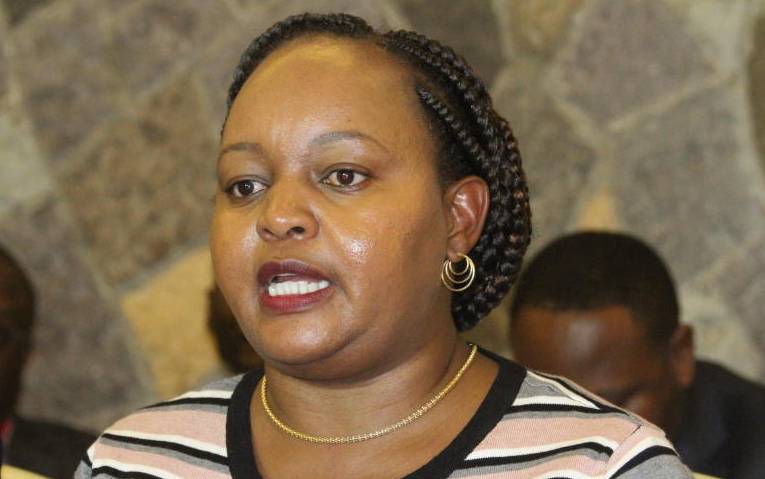 Besieged Kirinyaga Governor Anne Waiguru (above) is having a date with fate as the Senate hears her impeachment motion today.

This is after the House received her ouster motion which it will debate on whether it should be handled on the floor of the house or by a committee.

Waiguru was ousted on June 9, 2020, after 23 out of 33 ward representatives voted in support of her impeachment on the strength of charges of violation of the Constitution, abuse of office and gross misconduct. Four MCAs abstained and six of the ward reps were absent.

The motion was tabled on March 31 by Mutira Ward Representative David Kinyua Wangui who faulted the governor for deliberately failing to submit county plans and policies to the County Assembly for approval.

However, on June 11, the governor through her lawyer Waweru Gatonye challenged the impeachment motion at the High Court on grounds that the MCAs violated the law in moving the motion.

“We are asking the court to stop any other body from discussing, seizing, deliberating or acting upon the impeachment motion and to suspend the resolution reached by the Kirinyaga County Assembly pending the determination of this case,” said Gatonye.

But this application suffered a setback when Justice Weldon Korir ruled in favour of the MCAs, reaffirming that their actions were within the law.

The motion was forwarded to the Senate and is scheduled to be discussed by the legislators who will determine the fate of the former Devolution Cabinet secretary.

There have been divisions among the leaders as to whether the hearing should take a plenary or House Business Committee route.

But speaking to KTN News on Tuesday, Senate Speaker Kenneth Lusaka said that the House will discuss the motion upon being tabled and make a decision whether to handle it through the House Business Committee or a plenary sitting.

According to Speaker Lusaka, if the HBC takes up the debate of the motion, Waiguru’s fate will be determined after 10 days.

“In the committee, the matter will be determined in 10 days after listening to both sides (governor and MCAs). The team will then report to the House on the findings,” he said.

The governor will survive the ouster if her defence will hold water but could be shown the door if the war reps carry the day.

In the plenary, Mr Lusaka said that the legislators will discuss the motion and then be called to vote to determine the outcome.

He said: “We have given a provision for extended seating...and when it comes voting we will do a roll call where we call your name and you vote.”

While responding to claims that there was an already established list of members of the HBC, the Speaker said that such assertions are mere rumours.

He said that he only saw names being circulated in social media but they have not come up with a list since the approach of how to handle the motion is yet to be determined.

The Senate hearing comes amidst appeal from the Kirinyaga MCAs for the adoption of the plenary claiming that justice may not be served in the HBC route.

The motion has brought ODM leader Raila Odinga under criticism over claims that he met Waiguru over the weekend to plot on how to salvage her job. Mr Odinga denied the claims saying he had no intention to interfere with the process of the Senate.

The issue has also split the Orange party leadership after Minority Chief Whip Junet Mohammed revealed the party’s plans to defend the governor. But on the other hand, National Assembly Minority Leader John Mbadi contradicted this claim saying that the party had no plans to defend the governor blindly without examining the authenticity of accusations levelled against her.

Below are some of the highlights of the proceedings

Kipchumba Murkomen: Says no Senator has been punished for exercising their rights.

Alleges that a number of colleagues have been intimidated because they are nominated. Says they do not want another charade where senators will be punished after the sitting.

Moses Kajwang: What some members are taking to the floor for discussion should be channelled to a parliamentary group meeting.

Madzayo Mwachiro: Asks the speaker to arrange with the Sergeant at arms to foster social distancing.

Murkomen: Refers to Standing Order 249 which stipulates sitting arrangement in the House to ensure safety and social distancing.

Murkomen: Refers to Standing Order 249 which stipulates sitting arrangement in the House to ensure safety and social distancing.

Pareno: Protests what she terms as alteration of sitting arrangements contrary to how it is designated.

Speaker Lusaka: Directs that members take their seats as stipulated in the standing orders of the House.

The resolution calls on the United States and other countries to cooperate fully with the inquiry, which would report back in a year.

By Jacob Ngetich | 18 minutes ago