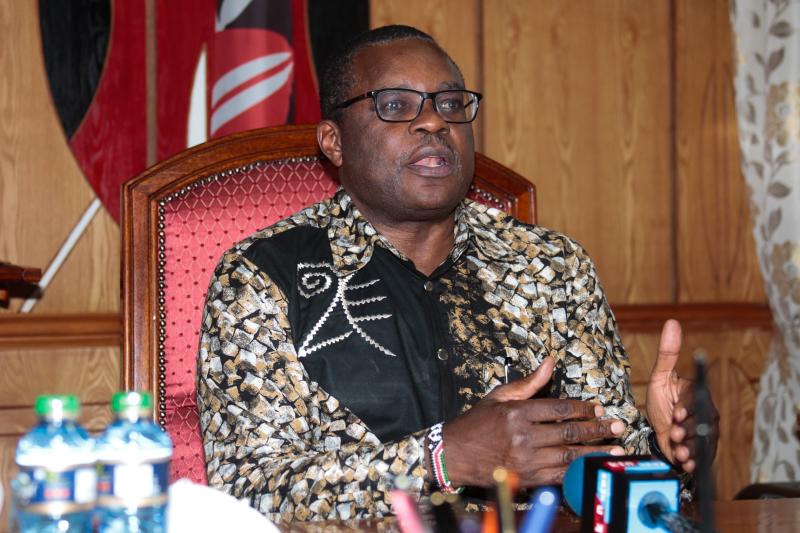 Senate Speaker Kenneth Lusaka (pictured) on Wednesday confirmed that he had formally received the notification on the impeachment of Governor Anne Waiguru.

Kirinyaga County Speaker Anthony Gathumbi also provided Lusaka with a roll call register of votes by Members of the County Assembly and a copy of the motion containing the grounds for yesterday’s impeachment.

Lusaka said he has convened a special Senate Business Committee to deliberate on the matter.

“Yes we have received the proceedings, we have handed it over to the legal team in preparation for the prosecution,” he said, adding the decision on the issues addressed will be fair to the parties involved.

Waiguru was ousted with 23 ward representatives supporting the motion anchored on violation of the Constitution, abuse of office and gross misconduct.

Four MCAs abstained and six of the 33 ward reps were absent.

The County Assembly Speaker Anthony Gathumbi announced the vote to remove Waiguru in the Tuesday session as dissenters were expelled from the House.

The impeachment motion was tabled in the Assembly on March 31 by Mutira Ward Representative David Kinyua Wangui, who said he enjoyed the support of at least 24 MCAs in the 33-member legislature.

The MCAs have accused Waiguru of deliberately failing to submit county plans and policies to the County Assembly for approval.

Kinyua accused Waiguru of gross violation of the Constitution by failing to deliver the annual State of the County address to the County Assembly.

The governor is also accused of using her office to improperly confer a benefit to herself when she was irregularly paid for travel allowances by way of impresses amounting to Sh10.6 million yet she did not travel. The amount was paid to her personal account in the name of Anne Mumbi Waiguru held at Equity Bank.

A section of Kirinyaga MCAs who had endorsed Waiguru's ouster spent Monday night in the county assembly as they prepared to debate an impeachment motion against the governor on Tuesday.

The Assembly Majority leader James Murango, who was in support of the ouster motion, called on the Senate and President Uhuru Kenyatta not to let them down by retaining Waiguru.

High Court had barred the MCAs from proceeding with the motion on the grounds that the Covid-19 restrictions were likely to bar the governor from offering a full defence to the issues raised against her.