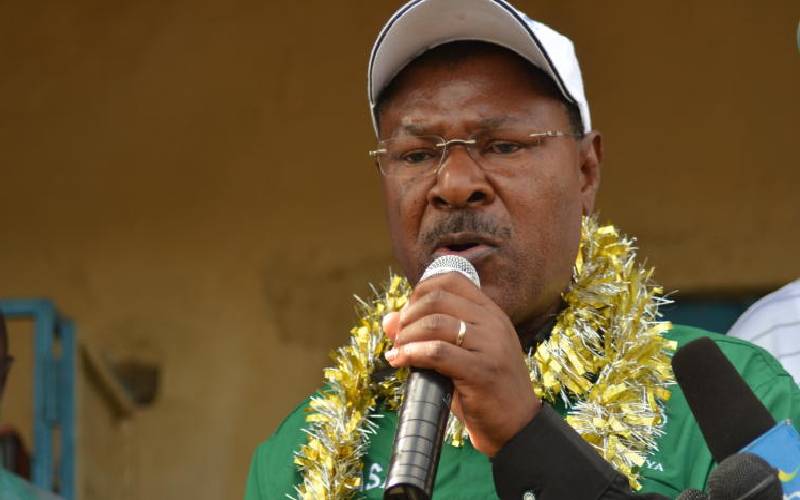 Embattled Ford-Kenya leader Moses Wetang’ula (pictured) has moved to court to stop his rivals from taking over the party.

In an application at the Political Parties Dispute Tribunal, Wetang’ula wants orders to stop the Registrar of Political Parties Anne Nderitu from recognising Kanduyi MP Wafula Wamunyinyi as the new party leader.

Wetang’ula alleged that people outside the party orchestrated his removal as party leader and that he had credible information that his detractors had been well funded by outside forces to destabilise Ford-Kenya.

Through lawyer Eunice Lumallas, Wetang’ula accused Wamunyinyi and Tongaren MP Eseli Simiyu of using illegal means to remove him as the party leader and that any move by Ms Nderitu to accept the changes would be criminal.

Lumallas claimed the documents presented by Wamunyinyi and Dr Simuyu to the registrar purporting to have been signatories to Wetang’ula’s ouster were forgeries.

According to the lawyer, Ford-Kenya did not sanction a National Executive Council meeting to be held at a Nairobi hotel, which resolved to remove Wetang’ula from office.

She said the party has a disciplinary committee to handle any dispute and that Wamunyinyi and Simiyu should have approached the committee if they had any grievances against the party leader.

“What we want is the status quo to be maintained in the list of the party’s officials pending determination of the dispute and we are asking the tribunal to stop Nderitu from acting upon any documents presented to her office as notice of change of Ford-Kenya leadership,” she said.

Although the Political Parties Dispute Tribunal had given them a hearing date of June 16, the party has applied to be heard immediately claiming that they fear the registrar might effect the changes due to pressure from outside forces before the matter is determined.

Lumallas said no letter was sent to Wetang’ula to notify him of the ouster as claimed by Simiyu’s team.

Previous article
ODM: We’ve no business kicking Mudavadi out of his Amani party

Lack of formula makes ODM get all funds meant for Nasa

By Wainaina Ndung’u and Ndung’u Gachane