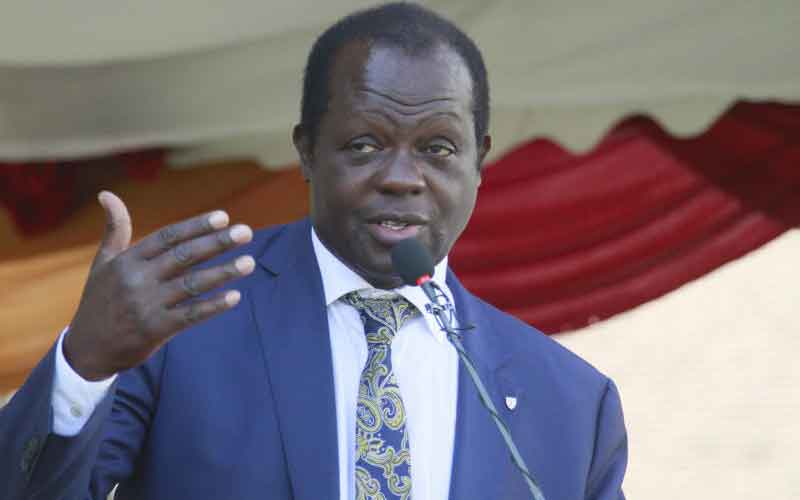 In an escalation of the battle to control the party ahead of 2022 polls, Mr Tuju yesterday accused Dr Ruto and his allies of choosing social media to engage in political shadow boxing over alleged grievances occasioned by the changes to the party’s National Management Committee.

“From what we have seen so far in social media, it is apparent that some orchestrated objections have been sent to the Office of the Registrar of Political Parties (ORPP) and we are awaiting the official communication from the registrar on those protests and we will respond,” said Tuju in a statement.

Ruto at the weekend led his allies in filing a series of protest letters to Registrar of Political Parties Anne Nderitu.

He later took to social media to accuse those he labelled as political rejects for trying to make fraudulent changes in the party structure.

"The president and party leader of the Jubilee Party did not and cannot be party to any fraudulent and illegal changes to officials of our party. This is the works of political rejects, conmen, fraudsters whose party allegiance is already elsewhere,” said Ruto in a tweet.

Tuju said he was shocked that some high-ranking party officials had decided to use social media to prosecute differences in the party.

“The only matter of concern is that social media was supposedly chosen by some leaders to air their grievances while they do have at their disposal other internal channels of communication,” added Tuju.

The Cabinet Secretary without portfolio fell short of linking the DP to claims of rigging out senior politicians in Mt Kenya in the Jubilee Party nominations in the run-up to the 2017 General Election.

A host of poll losers in Uhuru’s home turf of Mt Kenya, among them former Kiambu Governor William Kabogo, had accused Ruto of rigging them out in the party primaries.

Tuju, who is in Uhuru’s axis of Jubilee, said when the emotive matter of alleged rigging arose, they did not resort to social media to resolve it, but used internal party organs.

“We at the party headquarters have adhered to the policy of settling differences in the party within the party to the letter, especially in the face of very emotive submissions with respect to our National Elections Board that was accused of having been used as a rigging machine in the Mt Kenya region,” said Tuju.

He explained that the changes in the party were necessitated by some of the officials who have since been appointed to government jobs.

He issued the statement as Nderitu wrote to the troubled Pangani-based party to furnish her with documents around the intended change of officials.

Party Deputy Secretary-General and Soy MP Caleb Kositany had on Tuesday written to the registrar requesting for all relevant documents pertaining to the changes.

In the letter, Mr Kositany accused Tuju and party chairman Nelson Dzuya of making changes unprocedurally in the party.

Nderitu, in a letter to Tuju, said: “Upon review of this letter, it is noted that some of the requested records of Jubilee Party are not in the custody of this office.… your party is notified to comprehensively provide these particulars for inspection and processing of this request.”

But Tuju laughed off the matter, questioning why Kositany could not walk to the party headquarters and collect the documents he requires.

“Why should he write to the registrar? What kind of a deputy is he if he cannot walk to the Jubilee headquarters and ask for the documents," posed Tuju.

He said he was surprised that the MP was acting as a stranger to the ruling outfit.

But in a quick rejoinder, Kositany described Tuju as a mere appointee whose term has ended, therefore cannot assume any party mandate.

“It is immoral that Tuju and his cohorts have taken advantage of Covid-19 pandemic to orchestrate fraudulent changes to the party. Covid-19 did not suspend the rule of law in the country,” said the Soy MP.

Tuju hit back at Kositany saying, “if my term as Secretary General expired, his must have expired even earlier.

Previous article
Come back to work county begs healthworkers
Next article
Pregnancy made me hate my husband's voice, cooking