Noisy MPs retreat to comfort in the heat of virus attack 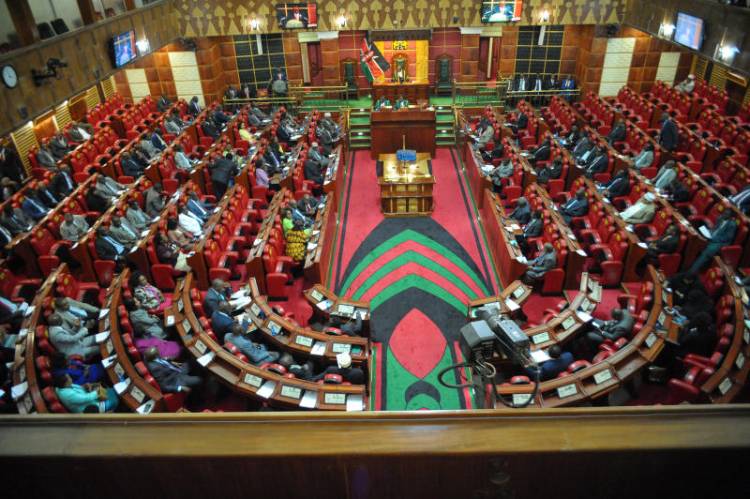 As the country grapples with the effects of the coronavirus pandemic, the absence of the third arm of government - the Legislature - is raising concern.

At the moment when the public was expecting parliamentarians to be part of the discourse of arresting the spread of the virus, the August House abruptly went on recess.

The result has been a delay in the enforcement of a raft of measures announced by President Uhuru Kenyatta and which needed parliamentary approval to keep a slowing economy from shutting down.

According to some observers, the National Assembly and the Senate were too quick to adjourn yet they had the responsibility to oversight the government’s response to coronavirus.

While their peers in the UK, the US and other countries around the world were coming up with coronavirus-related legislations, Kenyan MPs were busy pointing fingers at the Executive.

Former Nyeri Town MP Wanyiri Kihoro admitted the MPs had abdicated their role by hiding in their houses in Nairobi instead of educating the electorate about what needs to be done in this extra ordinary times.

“This is a public health matter and the MPs should have gone to their constituencies to act as a bridge between the government and its citizens. Ideally, they ought to be filing returns on what is happening on the ground and what needs to be done,” he said.

In other countries, parliaments are meeting through video conference and making their governments know the plight of their people.

Political analyst Herman Manyora says Parliament will only be useful when MPs are called upon to pass Bills as is happening elsewhere. ? “There are only two things that Parliament can do; they can ventilate and come up with suggestions that have no meaning or they can pass laws to mitigate what we are going through or what we will go through. Getting through this pandemic will need interventions and a good number of those interventions require the force of law.”

Majority of the Bills come from government and if these laws are going to be useful they are going to have financial or security implications.

Four days after Kenya declared its first case of Covid-19 on March 13, Majority Leaders of both Houses called for an adjournment until April 19.

MPs were scheduled to go on recess at the end of last month but they could not wait because they needed to be safe.

During the Motion on adjournment, National Assembly Majority Leader Aden Duale said that the decision had been made by House Business Committee as part of Parliament’s precautionary measures aimed at containing the spread of the disease.

Duale’s statement read: “Deeply concerned that this pandemic, which is said to have no cure, has spread to many countries with the potential of affecting a large percentage of the world’s population is still unfolding, this House resolves that notwithstanding the approved calendar of the House for the Fourth Session, the House adjourns from Wednesday, March 18, until Tuesday, April 14, at 2.30pm.”

He noted that the Speaker will also be free to refer any appointment made by the President for processing during the recess without having to recall the committee.

The Majority Leader urged with the government to set up a fund to help cushion small-scale businesses from the effects of a possible lockdown.

“A lot of businesses will be affected and it is incumbent upon this House to create a fund to cushion our businessmen,” Duale said.

The senators also recoiled to their comfort leaving the electorate on their own.

Murkomen while moving the motion of adjournment at the floor of the senate said they had moved their sittings from Wednesday March 18 to Tuesday April 14, but will also hold sittings on Tuesday March 31 and this Tuesday. After the adjournment, Murkomen tweeted: “I have just moved a motion adjourning the Senate from today March 17 until Tuesday April 14 at 2.30 PM in regard to Covid-19.”

Political pundits believe that Kenyans would have expected parliamentarians to come up with emergency legislation to address public health care concern as well economic stimulus for the country.

Nairobi Senator Johnson Sakaja said he had opposed the Motion and insisted that senators should not consider going home but instead use their legislative capacity to help the situation.

“I’m against this adjournment of the Senate for both scientific and legal reasons. Legal reasons are that people need us today more than before. These actions being taken at a time of crisis need oversight.”

At one point, Nominated MP Godfrey Osotsi asked Speakers Justin Muturi (National Assembly) and Ken Lusaka (Senate) to recall the Houses to deliberate key issues that may salvage the situation as the country fights the coronavirus outbreak.

Yesterday, Minority Chief Whip Junet Mohammed National Assembly was to legislate and without any Bills to debate the House would be nothing more than a talking shop.

“Without Bills from the Executive we will just be a talking shop. If it is ideas, those we can give even when we are out of the House. We have a special sitting planned for Wednesday to discuss the President’s Uhuru Kenyatta Executive Directive to mobilise resources to fight the virus.”

Kipipiri MP Amos Kimunya added: “The physical numbers have reduced but we are all busy working because we are concerned not only about what happens in a health perspective but what happens to the economy.”

Kimunya said although then legislators have limited physical interaction in the House now only 70 people can sit in the chamber at one time.

According to Mr Osotsi, Parliament has a crucial role to play on key issues affecting wananchi like the Covid-19.  “We can work in shifts like other government departments, we need to prepare legislation that can help the country,” he said.

He explained that Parliament needs to come up with a Lockdown Bill to deliberate on physical planning, monitoring issues, health management, national security and administrative issues before a total shutdown is ordered.

“The leaders stand out at the time of crisis and offer direction but the sad situation obtaining in Kenya is that during the coronanvirus the elected leaders have done a runner on Wanjiku,” said analyst Dismas Mokua.

Mr Mokua said the elected leaders that they do not understand the problem nor have the capacity to offer solutions.

“One would have expected the elected leaders to have an vigorous intellectual brainstorming sessions with public health experts so that the outcomes are translated to law,” he added.

Previous article
To mask or not to mask