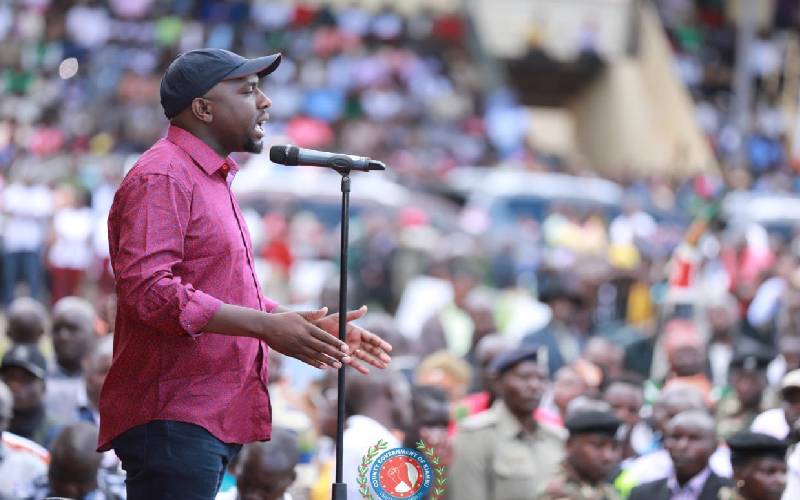 Senate Majority Kipchumba Murkomen has urged political leaders to stop lying to Kenyans that the Building Bridges Initiative (BBI) report will solve Kenya’s economic challenges. “We were elected do that we can help solve issues of the public.  Money was allocated to do so, therefore stop lying to Kenyans that the BBI, will solve the economy,” he said.  Speaking during the BBI rally in Meru, Murkomen also urged a section of political leaders to stop insulting Deputy President William Ruto, adding that respecting the President comes in hand with respecting his deputy.

“I am happy today because people who insult DP Ruto have not been given chance to address the rally, and that should be the way forward for the BBI,” he said. The Elgeyo Marakwet senator hit out at BBI proponents over what he described as hypocrisy, saying that the same people who have not accepted that President Uhuru Kenyatta won the 2017 General Election are the same people now telling Kenyans about BBI and unity. He told the leaders to first accept that President Uhuru won the 2017 polls before they can champion the BBI gospel. “If we want to have the BBI, we must first accept the truth that, the people of mount Kenya and the people of Kenya voted for President Uhuru Kenyatta,” “If the truth does not start from there, the nation cannot move forward,” he added.

He further urged politician to abandon political fraud and lies are the biggest challenges of Kenyan politics, urging them to stand with the truth. “If we want to unite Kenyans, let us stop political the lies and let people say what they want say.”