Ole Kaparo: How I arranged first private meeting between Mzee Moi and Kibaki 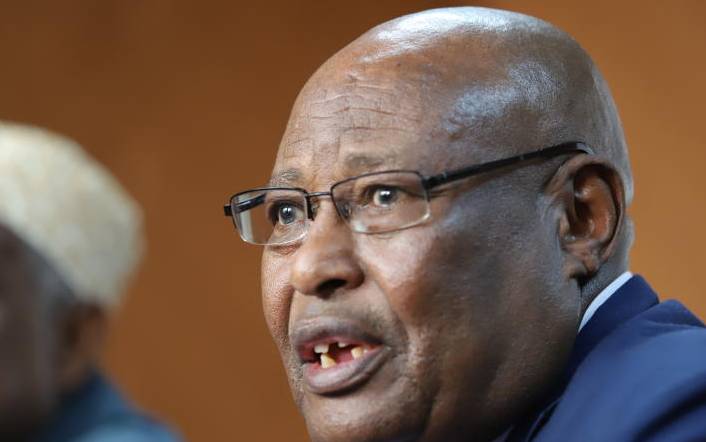 Former National Assembly Speaker Francis Ole Kaparo has revealed that he once arranged a secret meeting between the then-sitting president Mwai Kibaki and his predecessor Daniel arap Moi after the 2002 General Election.

Kaparo (pictured) said that after NARC took power, under the leadership of Mwai Kibaki, a certain group of Members of Parliament was pushing the State to remove the former president (Moi) from his Kabarnet Gardens residence.

He narrated that he was alerted about the plot by Mr John Lokorio, who later worked as Mzee Moi’s personal secretary.

“I was phoned by John Lokorio. Nilienda kumwona rais Kibaki nikamwambia hiyo ikifanyika mtakuwa mmewasha moto hamuezi zima (I went to see President Kibaki and told him that the move would ignite controversies which could not easily be quelled,” he said.

After meeting the former president Kibaki over the matter, he arranged for the first meeting between the two to iron out the issue and put it to rest, which he said succeeded.

His efforts were fruitful as the move by the MPs faltered along the way as Mzee Moi went to his retirement with a bliss.

According to Kaparo, his relationship with Mzee Moi had blossomed and ran deeper beyond the political life.

While talking to KTN News, the former Speaker narrated how he first met the former head of state after drafting a memo seeking his solution on rampant corruption which was tearing land buying companies in Nyeri.

Kaparo said that he was working as a lawyer at the time, and had a backlog of unresolved cases blocked by the corrupt land company officials in Nyeri.

“I tried the courts and the provincial administration but in vain. There was corruption perpetrated by the officials of the companies. Then I drafted a memo and sent it to him (Mzee Moi) at Eldoret State House.”

He said that Mzee Moi sent for him and he was taken to Eldoret only to find out that his breakthrough in life was just beckoning.

“He sent the police to come and pick me and take me to Eldoret I thought I was under arrest,” he said while paying tribute to the former head of state at Kabarnet Gardens in Nairobi.

Kaparo said he found ‘a humble man he had never ever seen before.’

After gaining his calm, he narrated the sad tales of shareholders of land buying companies who had suffered in the hands of their officials.

The help came through when Mzee Moi constituted a commission led by Fred Mwango to address the grievances of Nyeri people who were purchasing land in Laikipia.

Kaparo then took a dig at critics who argue that Central Kenya was sidelined during the 24-year rule of Moi.

“Those people who say Moi never cared for people from Central Province need to open their bonnets and be checked [get heads checked],” he remarked.

Amidst clamor for multiparty, Kaparo recalled that Moi played a part in his entry into elective politics.

He was picked as assistant minister in the Ministry of National Guidance and Political Affairs in 1992.

He said: “If not for Moi, I wouldn’t have been the Kaparo you know. He gave me advice and support. He was like my father.”

Kaparo said that his stint was short-lived as Opposition wave rendered him jobless after 1997 election. To him, it was just an impossible to win a seat through a KANU ticket at the time that Mwai Kibaki and the late Kenneth Matiba, who were Mzee Moi’s political opponents, commanded support in his area.

“If you said you were KANU in Central Kenya, you would be buried alive. When I lost I went to look after my cattle. Then he called me back and told me you’ll be Speaker,” he recalled.

He stuck with Mzee Moi who he said pushed him to assume the role of a Speaker in the National Assembly. Kaparo then served as a speaker under the regime of former president Mwai Kibaki.

The chaos in China's sporting programme caused by the deadly coronavirus outbreak, which has already forced China to cancel or reschedule a host of ev

By Titus Too and Lynn Kolongei | 6 hours ago

PNU lays strategy ahead of next year's general elections
.