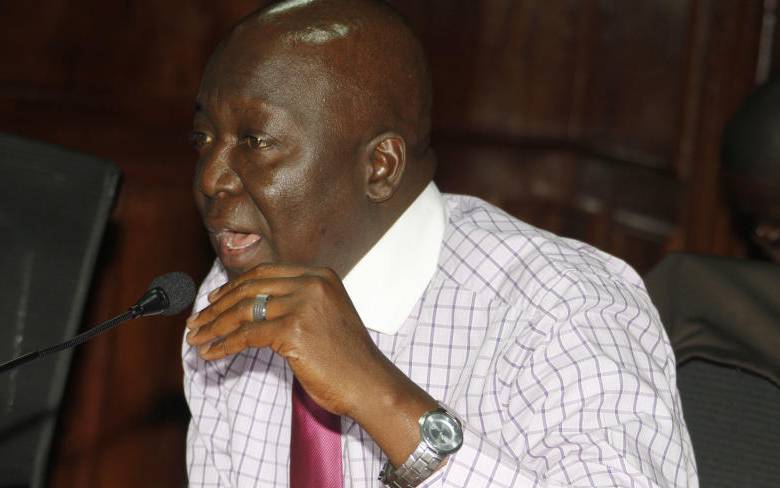 Former Gem MP Jakoyo Midiwo who is a first cousin to Orange Democratic Movement (ODM) leader Raila Odinga and close ally has returned to the party.

The former MP ditched ODM following allegations of botched party nominations in 2017 and vied for the parliamentary seat as an Independent candidate.

Midiwo (pictured), however, lost to his long time competitor Elisha Odhiambo who vied for the parliamentary seat on an ODM ticket.

Midiwo had claimed that he won the party primaries but some individuals in the party conspired to rig him out.

Midiwo, who for the first time announced publicly that he has returned to ODM, said he was now more than ready to fight for the party and its leader.

Speaking in Ambira, Ugunja Sub County at a funeral, the former MP revealed that they had held several meetings with his brother Raila.

"Together with my brother Raila, we have sat down and talked. Kenya is bigger than me. Henceforth nobody should try their tricks and games on our party leader Raila, I will definitely fight you," he announced.

Midiwo was confirming the sentiments of Ugunja MP Opiyo Wandayi who had earlier announced at the funeral that Midiwo was back to the party.

Wandayi who is the party's political affairs director said the party had tasked him to spearhead the process of sweet talking the renegades.

ODM is wooing leaders who decamped to other parties as it builds grass root supports ahead of 2022 General election.

Mr Wandayi said that Midiwo's return to the party will not only strengthen it at county level but also at national level.

"Midiwo and I, have been speaking well. Everyone in the party agrees that we need someone in the calibre of Midiwo in the party to move forward especially now that he is not in parliament and have some time in his hands," noted Wandayi.

Midiwo who ditched ODM supported former Rarieda MP Nicholas Gumbo who vied for the gubernatorial seat in Siaya as an Independent candidate.

Midiwo has openly talked about corruption in counties and put on spot Nyanza Governor's for allegedly failing the electorate.

Thai soldier kills 26 in rampage, most inside shopping mall

By Stephen Nzioka | 49 minutes ago

By Josphat Thiong’o | 49 minutes ago

By Allan Mungai | 49 minutes ago