Raila arrives in Mombasa as BBI train hots up [Photos] 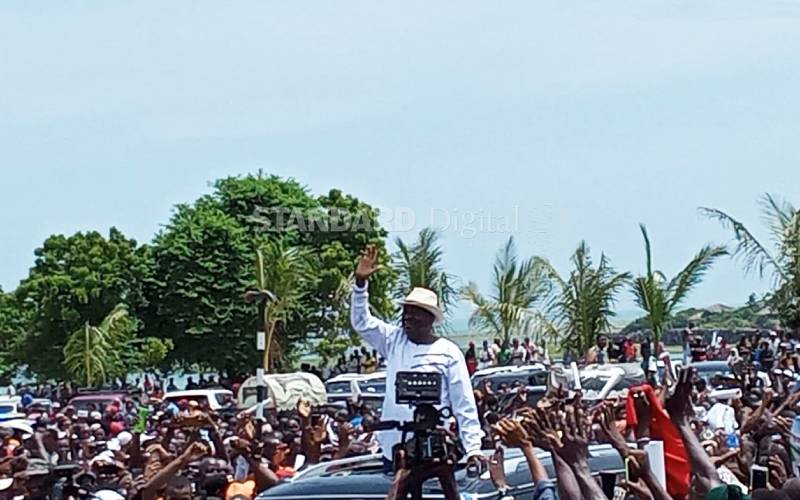 Before heading for the venue, the ODM leader held a meeting with governors from across the country.

It was after the meeting that he announced the change of venue from Tononoka Grounds to Mama Ngina.

Allies of Raila vowed that they will not allow their rivals to address the BBI rally at Mama Ngina grounds, Mombasa.

Raila had on Friday announced a change of venue from Tononoka grounds, citing security concerns.

More than 30 MPs had arrived by 11am. Five governors from the region were expected, except Kwale's Salim Mvurya. No reason was given for his absence.

Earlier, there were reports that Kanu leader and Baringo Senator Gideon Moi would attend.

Governors Anne Waiguru and Charity Ngilu were in attendance.

Kilifi North MP Owen Baya promised that security was tight and that no scuffles should be expected.

He urged political rivals to set their differences aside and create an environment where matters affecting the mwananchi can be addressed.

Nominated Senator Naomi Shionga denied that there would be chaos, adding that BBI is about unity and inclusivity, including accommodating people's ideas for the betterment of residents' lives.

Etale who took to Twitter on Saturday morning to dismiss Murkomen described as childish claims that some leaders will not get seats at the rally.

“Fellow Kenyans, please ignore the nonsense being spread online by desperate Tangatanga leaders. I have seen Murkomen claim that he has been threatened that he won’t get a seat at today’s rally in Mombasa. This is utter rubbish. Kiti tu! Watu wapunguze ujinga,” he tweeted.

He told Murkomen and his Tanga Tanga colleagues to avoid political sideshows and instead join Kenyans at the rally to drum up support for the BBI report.

“If you are serious you want to join other Kenyans at the Mama Ngina Water Front, just do it. You are a leader and no one is interested in sideshows. Huu upuzi is becoming too much,” added Etale.

Murkomen had claimed some people are planning to humiliate leaders allied to Deputy President William Ruto during the Coast region's forum today.

The Elgeyo Marakwet senator accused unnamed people of planning to deny the Tanga Tanga leaders seats and even heckle those who would speak at the meeting.

Murkomen on Friday said he has been threatened and told if he attend the meeting, he will be humiliated.

He, however, vowed to attend the rally, adding that if humiliating him and other leaders will help unite the county, then so be it.

“I have been threatened that if I attend the Mombasa BBI meeting I shall be humiliated by being denied a seat, not being allowed to talk or even if I am allowed to talk I shall be heckled. If that’s what it takes to unite this country so be it and I am ready to absorb. Tukutane Mombasa,” tweeted Murkomen.

What Kenyans expect from the BBI Report