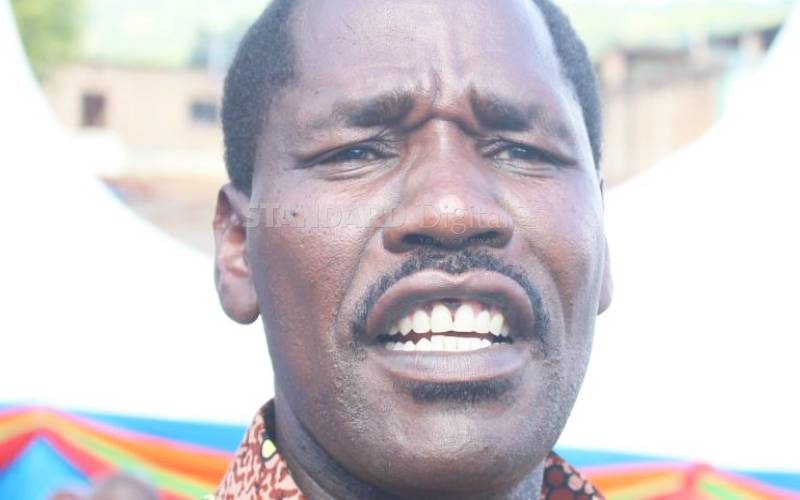 The writing has been on the wall for former Agriculture Cabinet Secretary Mwangi Kiunjuri, whose exit yesterday paved the way for an experienced hand to re-enter Cabinet.

For Peter Munya (pictured) and Kibaki-era minister Mutahi Kagwe, the stars were aligned just right and signs pointed to better fortunes ahead.

The Agriculture docket has turned out to be a poisoned chalice for the former Laikipia East MP, who was shown the door after six years in Cabinet.

The President has suffered the ignominy of hemorrhaging support in his backyard as key agricultural sub-sectors wither on the vine of corruption and mismanagement.

From coffee to tea, dairy and rice, the region’s economy has literally collapsed, leaving residents cursing the government they voted for almost to a man.

The President’s move to sack his former close ally is also seen as an attempt to consolidate support in the Mt Kenya region, which has waxed and waned since the 2017 elections.

With Kiunjuri seen as a cheerleader for Deputy President William Ruto’s 2022 ambitions, political observers deem this dalliance as betraying the President, who has pleaded with leaders to put politics on the back-burner.

Uhuru has not hidden his disdain for pro-Ruto MPs from the region, who he has publicly reprimanded for “being obsessed with politics more than development.”

Since the start of his second term, Uhuru has not been in good terms with Kiunjuri, who is regarded as one of the senior politicians from central Kenya.

Kenyans clearly remember when the president finished his official speech at the Nairobi ASK showground, turned to the Agriculture CS and warned him about maize payments at the National Cereals and Produce Board.

The President, speaking in vernacular, warned the CS that there would be trouble if money continued to be paid to well-connected individuals.

“If you pay, you will be in hot soup,” Uhuru said in full view of cameras and to the surprise of dignitaries.

Kiunjuri, on the other hand, has not hidden his support for Ruto. After the launch of the Building Bridges Initiative report, he convened a Mt Kenya legislators’ forum in Embu, which was attended by more than 50 MPs, mostly aligned to the deputy president, and where a resolution was passed to support the report without amendments.

He has also indirectly criticised proposals to extend Uhuru’s tenure in power and instead urged him to keep his 2013 promise to his deputy by supporting Ruto’s 2022 presidential bid.

“I want to tell you that any covenant you make with another person is also a covenant with God,” he said.

Kiunjuri’s fall contrasts sharply with the rise of Munya, the former Meru governor. Since his appointment, Munya has distinguished himself as a key defender of the president and harsh critic of Ruto.

He was in hot soup last year when it was alleged that he had met several Mt Kenya CSs and top State technocrats at a hotel in a plan to eliminate the DP. He later recorded a police statement on the matter.

Munya has recently taken on critics of the BBI, saying only leaders with ill intent could oppose an attempt to unite the country.

It was vintage Munya when he referred to Kikuyu MP Kimani Ichung’wa to “Sugoi” after the latter criticised his handling and chaotic marketing of the dairy, coffee and tea sub-sectors.

Munya has also stated his support for the creation of a strong prime minister position, adding that he sees no hindrances to Uhuru taking the position if he garners majority support in Parliament.

Then there is Kagwe, who takes over at the Health docket. A systems man since the Kibaki days, the biggest criticism of his appointment is likely to be that he is the son-in-law of the late John Michuki.

The former Mukurwe-ini MP and Nyeri Senator has supported much of what Uhuru’s government espouses. His star was on the rise after he was elected to emcee the Mt Kenya leaders’ meeting with Uhuru at the Sagana State Lodge in November last year.

State House insiders at the time supported his selection as emcee on the grounds of experience. They claimed he had been emceeing in such presidential functions since the early Kibaki days.

Kagwe was also among the first leaders from the region to endorse the handshake by visiting opposition leader Raila Odinga. He also supported the BBI report by making a personal presentation.

The Nyeri man is seen as being brought into Cabinet to cancel out Kiunjuri’s influence in the region.