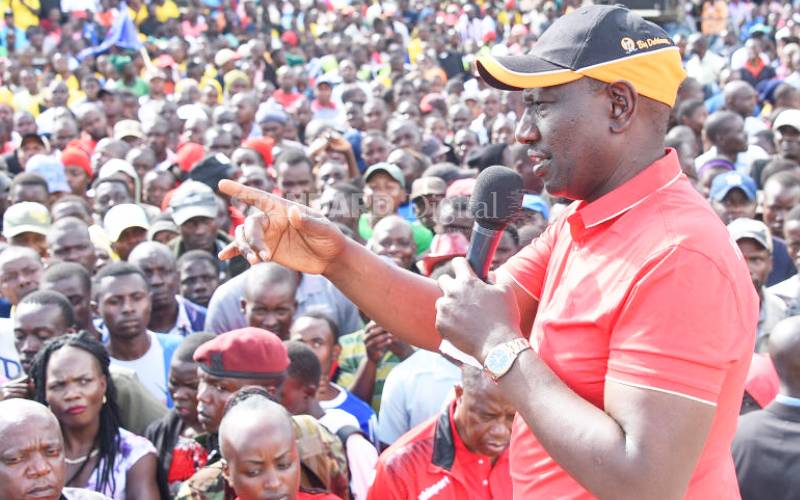 An agitated Ruto yesterday said the ongoing public debate on handshake and BBI could derail the government’s agenda.

“The handshake and BBI debate has brought confusion in the implementation of Jubilee’s Big Four agenda after it dismembered National Supper Alliance (Nasa) and killed the Opposition,” said Ruto.

Speaking when he presided over a church fundraiser at St Paul Makongi High School in Soy constituency in Uasin Gishu County, Ruto said Jubilee’s development agenda had been hijacked by the handshake and BBI debate.

“As Jubilee deputy party leader and the country’s deputy president, I will not stand and watch the government’s development agenda derailed by selfish and political conmanship brought about by those who want to spearhead handshake and BBI debate for their political selfish gains,” said Ruto.

He said the spirit of the handshake and BBI was to bring unity and end divisive politics that was threatening national cohesion and harmony.

“What we witnessed at the weekend in Kisii was not a campaign for BBI document but revival of Orange Democratic Movement’s 2022 presidential strategy,” said Ruto in reference to the BBI regional delegates forum attended by former Prime Minister Raila Odinga and Interior Cabinet Secretary Fred Matiang’i.

Ruto criticised spending of public funds on marketing the document, which he said a majority of Kenyans had endorsed. He said the funds should instead be channelled to revitalising the economy.

Kuria, who spent a night in a police cell after being arrested on Friday, echoed Ruto’s sentiments that things started going wrong for Jubilee after the March 2018 handshake between President Uhuru Kenyatta and ODM leader Raila Odinga.

“Jubilee achieved a lot in terms of development and national cohesion in its first term. But the rain started beating the administration after the handshake. The ongoing discourse on BBI and handshake has relegated government development agenda to the backseat,” said Kuria.

Meanwhile, Ruto has raised concern over what he termed contempt for court orders by government officials, noting such actions could lead to anarchy and impunity.

“Public officers have a duty and responsibility both as individuals, collectively and as representatives of government to respect the rule of law and court orders,” said the DP.

His sentiments come hot on the heels of the arrest of Gatundu South MP Moses Kuria and the drama that ensued at Kilimani Police Station where he was being held.

The country is also on the spot over controversy surrounding the return of lawyer Miguna Miguna who has been barred from entering the country due to his citizenship status.

He also warned the Executive to respect the 2010 Constitution and rulings of other independent arms of the government such as the Judiciary and Legislature.

Ruto also warned a section of Opposition leaders against using the BBI report to cause tribal divisions among Kenyans.

“We all support the BBI report. I understand some people wanted Yes/No camps but we will not go back there as a country,” said Ruto, who spoke at the commissioning of African Gospel Church (AGC) in Mulot, Narok West constituency during a service.

On reports that he had been kicked out of his official residence, Ruto said that was a “small issue” that would not distract him.