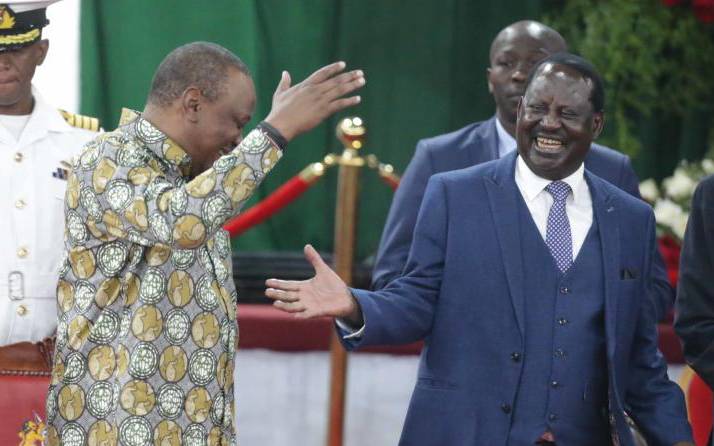 The official launch of the Building Bridges Initiative (BBI) report now sets the stage for another tedious exercise that could culminate in a popular initiative to change the law, political and legal experts have argued.

Analysts Martin Oloo and Herman Manyora identified the creation of a premier's post and the proposal to raise county allocations from 15 per cent to 35 per cent of revenue raised nationally as matters that would require a referendum.

Mr Cherargei pointed to sections in the report that change the Executive structure, treating Nairobi County as a special devolved region, change of county leaders' appointment of deputy governors, and the proposal to appoint commissioners on part-time basis.

Cherargei added: “As the chair of the committee that is likely to handle the matter, we will not allow a Bill where the constitutional legal threshold has not been achieved.”

The senator said the Constitution was clear on articles protected in law, citing, the system of governance, structure of Parliament and devolution, national values and principles, and the sovereignty of the people.

“Article 257 of the Constitution stipulates how a referendum should be done. The county assemblies, as well as the public and Parliament, will have to be engaged."

Makueni Senator Mutula Kilonzo Jnr said there was no shortcut to making changes in law through Parliament, adding that any changes must be subjected to a people's vote.

"You cannot amend the structure of government or change the functions of Parliament without a referendum," he said.

But National Assembly Majority Leader Aden Duale disagreed, saying the country would not need a referendum to implement the raft of proposals contained in the BBI document.

“Even though most of us who genuinely desired a parliamentary system have not achieved it through the BBI, I have strong faith that we can achieve all the proposals contained in the BBI report without a referendum, which will definitely be divisive with winners and losers,” said Duale.

Law Society of Kenya Nairobi branch chairman Charles Kanjama said any proposals touching on constitutional commissions like the independence and tenure of the Independent Electoral and Boundaries Commission must be subjected to a referendum.

"Article 255 touches on the sections protected in law and that includes the sovereignty of the people, which is delegated in Article 1 of the Constitution about the Legislature, Executive and Judiciary," he said.

Mr Kanjama added: "In this case, they are seeking to change the sovereignty of the people, which will require a vote. This also applies to creation of the position of a PM and having a mixed Cabinet of MPs and technocrats."

Mr Manyora argued that the report was "clearly drafted not to ignite political tensions by scratching the surface and avoiding deep-rooted issues, which cause tension among Kenyans".

He said the report had served its purposes by lowering political temperatures.

Mr Oloo, on the other hand, argued that the report attempted to address key issues but refrained from confronting the "real issues to avoid public backlash".

“The BBI report brought tempers down. Those who were ready for war were deflated and practically have no reason to complain,” he said.

Oloo added: “The handshake and BBI have achieved something; national harmony. The next action is drafting a Bill after collecting public views, which is not a preserve of Parliament alone.”

He singled out inclusivity, which seeks to address the issue of winner-take-all in elections by creating the PM’s post, saying the "political aspect was fairly tackled but not the "social milieu" in drafting appropriate national consensus-building".

“Tanzanian Foreign Affairs minister John Kabudi was spot on. He hit the nail on the head, as the BBI report scratched the surface, leaving room for sub-sectors like the media, civil societies, churches and others to confront them head-on,” Oloo said, commenting on the thorny issue of ethnic and political divisions.

He added: "The PM post requires clarity. There should be clear separation of powers and not a blur as it stands now. The PM should still remain accountable to the voters.”

The presidential system has no PM or official leader of opposition, as proposed.

Wiper leader Kalonzo Musyoka also called for further amendments, saying the process to appoint a PM was cumbersome while Central Organisation of Trade Unions Secretary General Francis Atwoli called for the creation of two posts each for deputy president and deputy premier.

In his speech, Raila said a team of experts would embark on sampling views from Kenyans to improve the BBI report.

“Public engagement will give rise to a truly acceptable document. It will represent the Kenyans' views. Let it remain with Wanjiku,” said Raila.

Uhuru, Raila and Ruto all called on Kenyans to read the report and own it. They also urged politicians not to hijack the process.

“The second phase is what will bring out the fundamental changes to the proposals outlined in the Senator Yusuf Haji-led task-force. If a Bill is fundamental now without public participation, we will have something unconstitutional, as the suggestions are contradictory," said Manyora.

Ruto said with the report in the public domain, it was time for MPs to take over.

“Parliament, the job is cut out for you, but you must be informed by the national conversation,” he said.

DP William Ruto at a crossroads