How Building Bridges Initiative will make or kill careers 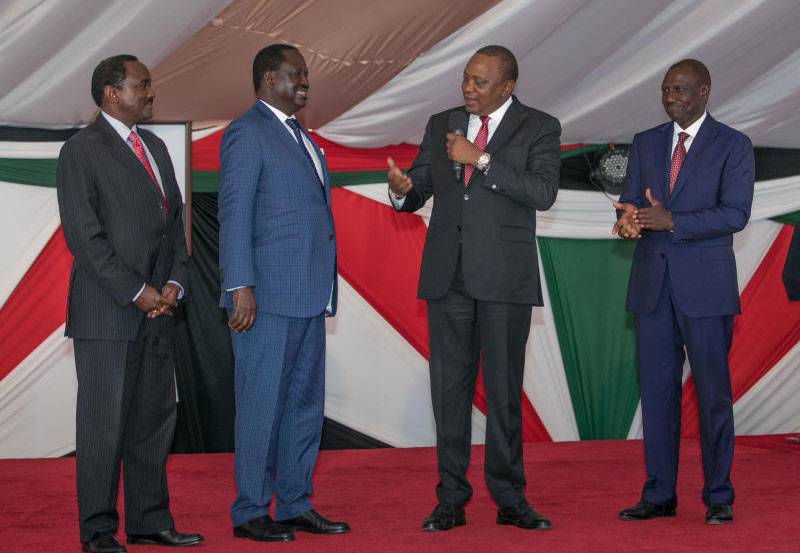 The Building Bridges Initiative (BBI) report could make or break careers in the country’s political arena.

“They are free to bring it (BBI report) to me on Tuesday and I assure you that as soon as I receive it, I will personally go through it and hand it to Kenyans,” said President Kenyatta.

The president has hinged his legacy on the report that will also affect the political future of his deputy William Ruto and Opposition leader Raila Odinga. Uhuru believes the recommendations in the report will cure the ills that have bedeviled the country since independence such as corruption, tribalism and discrimination.

These were part of the nine-point agenda that served as a reference point for drafters of the report, a product of the handshake between Uhuru and Raila in the aftermath of the disputed 2017 General Election.

With the president serving his last term, it means the contents of the report offers him the last chance to save a legacy battered by claims that his administration perpetuated some of the ills of past regimes, such as cronyism and graft.

“Only a fool will say there are no issues in this country that require addressing,” said the president last week during the Kibabii University graduation in Bungoma County.

Uhuru has told politicians to read the report amid jostling among key political players positioning themselves for a post-Uhuru presidency.

While the president is desperate to save his legacy, his deputy’s calculations and those of other key political players such as Raila are based on what the report portends for their political future.

For Raila, it is about his legacy as a Statesman, and about his options ahead of the 2022 political duel.

Dr Ruto is on record saying he will oppose any move to have a few people divide positions at the top, alluding to the possibility that the report could propose a parliamentary system of government, in effect killing his dream of inheriting ‘absolute’ power from President Kenyatta, should he run and win in the 2022 elections.

Political players and especially party leaders will be keenly waiting for the contents of the report that might formulate future alliances. For Kalonzo Musyoka (Wiper), Musalia Mudavadi (Amani National Congress), Gideon Moi (Kanu) and Moses Wetang’ula (Ford Kenya), any suggestion for an expanded executive might pave the way for power-sharing deals.

Others like Jackson Mandago (Uasin Gishu), Amason Kingi (Kilifi), Ali Roba (Mandera), James Ongwae (Kisii) and Mwangi wa Iria (Murang’a) have not made public their next political course of action. Pundits argue that should the report propose a third tier government, they might opt for it.

“I am going to the national table. I must now play national politics and I am ripe, having been an MP, a minister and a governor for two terms. Depending on what Raila tells me, I will be going for presidency,” said Mr Oparanya last year.

Raila has never shied from advocating for change of structure of the Executive. In September this year, he said the country was ready for a parliamentary system, which is suitable for a political landscape ‘composed of diverse cultural, religious, ethnic, racial and regional interests.’

He has also promised a tsunami that will sweep away the opponents of the BBI. Ruto has, however, dismissed Raila’s assertions that the BBI report will sweep him and his allies into the sea.

“There is that person saying that BBI will be a tsunami. We are not interested in a tsunami. The rest of us have been told by the president to wait and read the report. If our issues are inside the report, we will pass it. If the report is kombo kombo (crooked), we will defeat it,” said the DP. Gatundu South MP Moses Kuria also faulted use of the imagery, saying a tsunami is a dangerous phenomenon and the word should not be used to refer to a report meant to create unity.

Sources who spoke to The Standard in confidence said at least one of the governors could be eyeing a parliamentary seat in the event BBI proposes scrapping of the Senate. In July while campaigning for his re-election, Dr Mutua announced that he was interested in the country’s top job once he finishes his term as the Machakos boss.

Mudavadi, Kalonzo and Wetang’ula, who is also the Bungoma Senator, still harbour presidential ambitions but should the report favour an expanded executive, they would land lucrative positions and rally their troops to support it.

Women leaders who will be watching the report closely include Narc-Kenya leader Martha Karua. Having been out in the cold since the last election, Ms Karua will have the easiest choice to make -- either to go for the top seat or join an existing coalition.

Any far reaching changes proposed in the report may, however, have to go through parliament or be subjected to a referendum. The latter route means subjecting the changes to county assemblies as happened with Thirdway Alliance’s Ekuru Aukot-led Punguza Mizigo Bill that was rejected by MCAs.

National Assembly Majority leader Aden Duale said yesterday that history will judge Uhuru and Raila harshly should they not deliver on some of the promises of the BBI report.

“Raila Odinga and I have one thing in common; that the best way to end ethnic antagonism, divisive politics and elections is to have a parliamentary system that works for us.

“If President Uhuru fails to bring inclusivity, end ethnic antagonism and unite Kenyans, the BBI report will be a farce. BBI was born to bring national ethos, end corruption and divisive politics. If resources and power will not be distributed equally and horizontally, there will be no peace and tranquility in Kenya. BBI shall have taken Kenyans for a ride,” said Duale.

His Minority counterpart John Mbadi (Suba South) said yesterday the BBI report will herald a new Kenya where political governance at the top is not a preserve of only two communities or certain communities.

Mr Mbadi, who is also the ODM chairman, argued that both President Kenyatta and Raila have been making a clarion call that the current scenario where the winner takes it all in the elections should be relooked so that all Kenyans feel part and parcel of the government.

By Anthony Gitonga and Kennedy Gachuhi | 9 hours ago