Wisecracks and bitter truths to ponder during campaign season 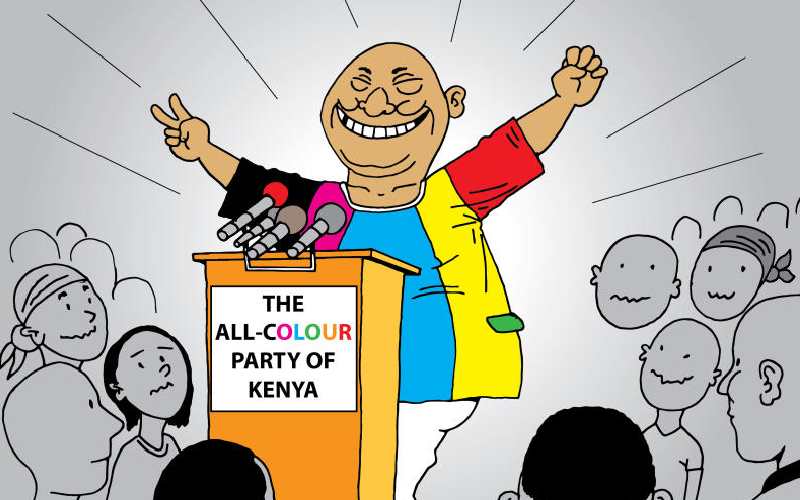 It is that crazy moment again when politicians run amok. Once they take to the microphone and see a cheering crowd, they will engage in what departed journalism guru Philip Ochieng used to call ‘verbal diarrhoea.’

They will swear Canaan is just around the corner but conveniently forget to tell which corner, and say they will bring down stars only to make you see stars through a slap on the face. Once elected, they will block your number, break every promise and steal your money. For, that is who most politicians are. Unfortunately, you and I vote them in. Luckily, some politicians have been honest enough to say who most of them are, and tell us what politics is, in the practical sense of the word. Here are some wisecracks from past politicians and assorted social commentators that should explain what Kenyans will witness in the coming months.

On hopping from one political formation to the other and back – an art perfected to a science by a Governor from Mt Kenya region and a Women Rep in a nearby county of former Rift Valley - this is what has been said:

“Politics is the second oldest profession on Earth – and bears a gross resemblance to the first.” – Ronald Reagan, a former US president. Of politicians with blood in their hands; have grabbed public land and stolen our money, this was a remark by Al Capone, the notorious mobster and kingpin of the American Mafia: “If the people of Chicago would elect me their Mayor, who am I to say No!”

On the quality of politicians we elect have a look at this:

“Politicians are like nappies. They should be changed often – and for the same reason!” – Maureen Potter, Irish actor and comedian.

“He knows nothing and thinks he knows everything. That points clearly to a political career.”

“A politician is a person who approaches every situation with an open mouth.” – Adlai Stevenson, former US diplomat and politician.

“When I discovered I had no talent or vocation for any job, I joined politics.” – Moss Keane, former British Conservative MP.

“A politician is a person who has nothing to say but will say it anyway!” – Sean Hughes, British actor and social commentator.

“If politicians don’t do it to their wives, they do it to the country.” – Mel Brooks, American filmmaker and social commentator.

“Politics is too serious to be left to politicians.” – Charles de Gaulle”, French strongman and war-time leader.

“Ninety-eight per cent of the adults are decent, hard-working and honest. But it’s the other two per cent that get all the publicity. But then – we elected them.” – Lily Tomlin, American actress.

Of politicians on early campaigns and lying they don’t want imperial presidency: “Anybody who wants the presidency so much that he will spend two years plotting and campaigning for it is not to be trusted with the office.” – David Broader, musician and social commentator.

“I see nothing wrong with power as long as I am the one who has it.” – Cecil King, British Labour party leader.

“I don’t mind how much my ministers talk – as long as they do what I say in the end.” – Margaret Thatcher, former British Prime Minister.

“Consensus is when we have a discussion. They tell me what they think and then I decide what to be done.” – Lee Iacocca, an American carmaker and executive famous for high-handed management style.

“There are three times in a man’s life when it’s pointless to hold him to anything: when he is madly in love, drunk, or running for office.” – Robert Mitchum, American actor.

On politicians being compulsive, pathological liars:

“The great mass of people will more easily fall victim to a big lie than to a small one.” – Adolf Hitler, German war leader.

“A politician’s lie can be halfway around the world before the truth has got its boots on.” – James Callaghan, a former British Prime Minister.

On politicians breaking promises and making new ones:

“A politician is someone who believes you don’t have to fool all the people all the time - just during elections.” – Stanley Davis, American actor.

“The most distinctive characteristic of a politician is selective memory.” – Richard Harris, Irish actor.

“A politician is a person who will double-cross a bridge before he comes to it” – Oscar Levant, American pianist.

On political water-melons who want to please everyone all the time, and take every position but none in particular:

“Al Gore is in danger of becoming all things to no people!” – American voter commenting on the character of former US Vice President Al Gore.

“When a politician says yes, he means maybe. When he says maybe he means no, and when he says no he’s no politician.” – Edwina Currie, British journalist-turned-politician.

“A politician should have three hats: one for throwing in the ring, one for talking through, and one for pulling rabbits out of if elected.” – Carl Sandberg, American poet.

“The most desirable qualification for a politician is the ability to foretell what is going to happen tomorrow, next week, next month and next year ... and to have the ability afterwards to say why it didn’t.” – Winston Churchill, former British Prime Minister.

“Politicians promise to build a bridge even where there is no river.” – Nikita Khrushchev, former Soviet leader.

“Practical politics consists in ignoring facts.” – Henry Brook Adams, American historian. On why to be reluctant in trusting any government in power:

“I don’t make jokes. I just watch the government and report the facts.” – Will Rogers, an American film actor.

“It would be desirable if every government when it comes into power, should have its campaign manifesto burned.” – Philip Snowden, British politician.

“Any government which robs Peter to pay Paul can always depend on the support of Paul.” – George Bernard Shaw, Irish playwright.

“Government that is big enough to give all you want can be big enough to take it all away.” - Barry Goldwater, former US senator.

“All government violence can do is to breed counter-violence.” – Nelson Mandela, former South Africa President.

“The more you read about politics, you realise that one party is worse than the other.” – Will Rogers, an American film actor.

“Man is born perfect; it is the political system that corrupts him.” – Arthur Scargill, a former British trade unionist.

And finally here is Kenyan’s homegrown mantra during election campaigns: Kula kwa wote; Kura ni siri! (Eat from every candidate; who you vote for is your secret) By the way, did you know half the youth cheering every candidate who passes by their town aren’t registered voters and won’t register, while half that is registered won’t show up at the ballot box?

Manchester City took a major step towards retaining their Premier League title with a 1-0 win over second-placed Chelsea on Saturday, opening up a 13-

Arsenal's north London derby at Tottenham Hotspur on Sunday has been postponed because their squad has been depleted by COVID-19 infections, injuries

By Githieya Kimari | 9 minutes ago

By Peter Kihara | 9 minutes ago

By Joseph Sanna | 9 minutes ago

It is wrong to gag lawyers from commenting on presidential petitions

By Editorial | 9 minutes ago