BBI proposals must go through a referendum 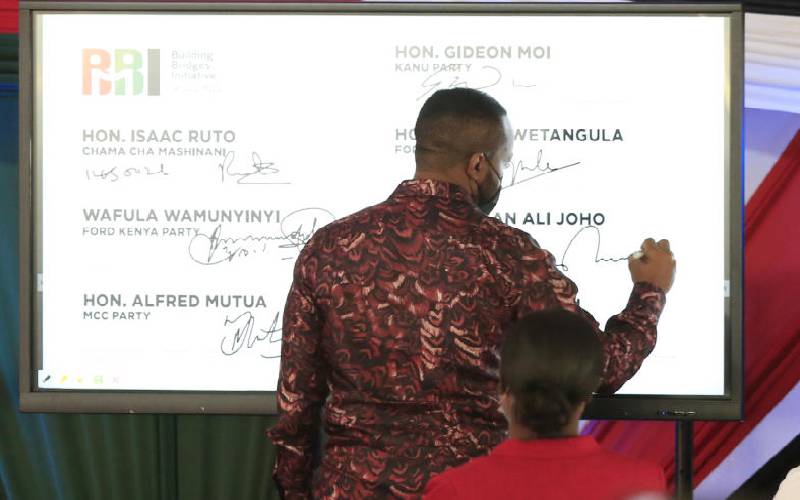 On February 6, 2021, lawyer Kamotho Waiganjo wrote an opinion headlined: 'How and why BBI may not require a referendum after all'. Unfortunately, Kamotho’s argument hopelessly failed to appreciate the true content of and how the provisions on constitutional amendments work.

However, though utterly unpersuasive, Kamotho’s opinion requires a rejoinder. This is because, given his professional profile, it is likely that high-ranking political leaders who are advocating and steering the BBI process took note of his opinion with significant enthusiasm.

Essentially, Kamotho advances four arguments why he thinks BBI amendments may not need a referendum for them to become law. First, he correctly argues that any popular initiative constitutional amendment Bill – regardless of its content – must go to a referendum if not voted for by a majority of the members of each house of Parliament.

He believes approval of BBI by Parliament will be a walk in the park because, after all, BBI promoters can easily mobilise the resources they need to cajole (read corrupt) MPs to vote for the Bill.

There is no space here to fully argue with Kamotho’s proposition except to say that the parliamentary process of passing the BBI bill is not as simplistic as he puts it, especially given the lengthy timeline, and numerous and methodical processes the Bill is required to undergo in Parliament.

The second and third reasons Kamotho provides are preposterous. These are the arguments that the promoters of the BBI Bill may force it through without a referendum because of the low political support BBI seems to have, and the difficulty of deploying near non-existent financial resources to hold a referendum.

Preposterous because Kamotho should be aware that political or financial expediency cannot be justification or the excuse for failing to comply with peremptory constitutional procedures.

The 2010 Constitution insists on compliance on both form and content. Form – that is whatever procedure it has set – must be complied with, failing which any constitutional decision or action taken is invalid. I am, however, more eager to deal with Kamotho’s fourth reason on why he thinks BBI can become law without a referendum.

He writes “I am not convinced that it [BBI] expressly contains any of these protected provisions [requiring a referendum under Article 255], unless one argues that the removal of the Cabinet approval provisions affects the functions of Parliament or that the appointment of the Judiciary Ombudsman offends judicial independence.”

He concludes that the BBI promoters may likely take the position that no referendum is needed unless they are forced to do so by the Court.

First, what does Article 255, which regulates when a referendum should happen, say? It provides that whenever an amendment “relates” to one of its listed “matters”, the amendment must be subjected to a referendum.

Among the listed matters are the national values and principles of governance; the Bill of Rights; independence of the Judiciary, commissions and independent offices; functions of Parliament; and the objects, principles and structure of devolved government.

And here are the problems with Kamotho’s arguments. To start with, he minimises what Article 255 expressly provides for. Article 255 does not speak of “provisions” it speaks of “matters”.

This is not a distinction without a difference. In law, like in common usage, a “provision” is often narrower than a “matter”.

For the Judiciary and independent commissions, the “matter” is their independence. Hence, if any amendment, such as the introduction of a Judiciary ombudsperson, will affect - positively or negatively - the independence of the Judiciary, it must go to a referendum.

Let us look at a few more of the BBI proposals to show why a referendum is constitutionally inevitable. Devolution. One proposal will suffice to illustrate. BBI proposes that county executive members (the equivalent of Cabinet secretaries) can now be drawn from members of the county assemblies (MCAs).

This proposed change affects the principle of separation of powers, which is a core principle of devolution. It also relates to the Article 10 principle on good governance.

It also affects the structure of devolution because it fuses the county executive with its legislature. It is a matter requiring referendum.

There are more. What of functions of Parliament? Let us look at two BBI proposals here. One, Parliament currently has a key function of approving presidential nominees to Cabinet and as principal secretaries.

BBI deletes that function and allows the president unfettered power to determine who the appointees are.

Two, BBI recalibrates the financial oversight function of the Senate by assigning it the additional function of oversighting revenues “raised by counties”, which is a function currently assigned to county assemblies. This, by extension, also affects the principles of devolution.

I could end here or we can analyse the entirety of BBI proposals and more than half of them would easily – and 'easily' is what to underline here – fall under the category requiring a referendum.

Kamotho and I know of a community that teaches one, very early on in life, never to attempt crossing a river without a stick to help constantly test its depth to avoid drowning.

When I first read his opinion, it conjured up the excitable thought that his was the metaphorical BBI stick to test the pushback BBI should expect if it started on an iniquitous narrative that no referendum is necessary to approve its constitutional amendments.

But for now, I will hold back those thoughts, if for no other reason than that BBI still has an arduous and mostly impossible path to travel before even getting to a referendum stage. If ever.

@waikwawanyoike is a constitutional lawyer