Why prime minister slot is the Achilles heel in BBI 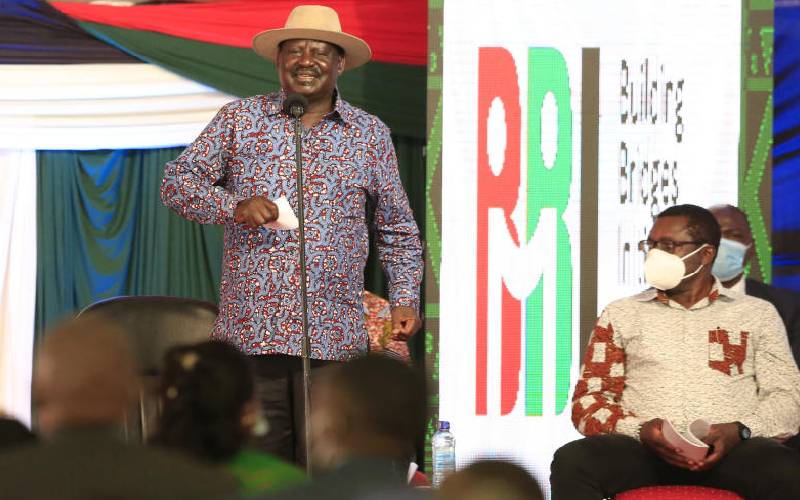 Ethnicity, language, religion and region aside, Kenyans co-exist homogenously until election fever paralyses national consciousness. Taking advantage of such public stupor, the fittest, in their raw urge to survive, sow tares among wheat so as to divide and rule.

Consequently, we have had no election in our modern history that is not acrimonious and largely violent. The adage that ripe fruits of independence thrive in the state, particularly, State House, adds fuel to fire. There is universal acknowledgement that our resources are being poured out like water; national coffers have dried up like a potsherd. All our national conscience is out of joint. Our hearts have become frozen with alarm from bizarre political narratives. Tongues are now stuck to the roof of our mouths due to uncertainty.

Preservation of national fruits among a coterie of well-connected politicians aggravates the democratic meltdown. These few take advantage of the system to encumber the taxpayer by skewing the calculus in their favour. In Kenya, such conspiracies are habitually hatched in crossbreed constitutional and legal structures that have no bearing on good governance except to preserve the fruit basket in the presidency.

In their quest to share the political gumbo, Kenya’s leadership has entrenched ethnicity as a constituency. Disquiet is heightened further by a lack of national form in public services and sharing of public resources, including land as required under the law. The additional burden of illiteracy, disease, poverty and rampant unemployment aggravates frustration among citizens, particularly the youth.

Such discontentment naturally leads to the outpouring and mass turnouts in protest during political upheavals. Yet such indulgence cannot be linked to the disapproval of the winner-takes-all menu alone for want of actionable evidence. Winning or losing is the price of democracy, the second-best should, in the spirit of democracy, acknowledge defeat and move on. After all, the contestants in this league of big boys and girls invite themselves to the fixture.

Without legally addressing governmental impunity, corruption and other excesses which are tolerated, dignified and largely celebrated, any proposal on structural changes would always be like a beautiful demonetised currency. Mere expansion of the Executive while accumulating power in a single station as proposed in the BBI report needs reflection.

Presidential fancies are buttressed further by the power to dismiss these additional offices at will. Cementing the doctrine of pleasure would lead to even more antagonism. Through unwarranted pressure, parliamentary consensus may be circumvented in order that the president has a final say in appointing the prime minister. Thus, the status of these offices will be a matter of personal grace and length-of-foot of the incumbent president.

Sri Lanka works a system of government at the top like the one envisaged in the BBI proposal. This scheme has resulted in siblings occupying the top positions of president and prime minister. Though this may be constitutionally and legally permissible, it contravenes the essence of constitutionalism inherent in the theory of separation of powers. The establishment of multi-Mobutuism, which was a consociational ethnically devolved set up to facilitate a customised approach of divide and rule in Zaire is an eye-opener.

Embedding in our Constitution the American structure of having the president and his deputy as running mates is a good thing. It is capricious to dilute this office with presidential bliss of hire and fire. In this system, the rank of the deputy is of momentous authority and forms a fundamental ingredient of the president’s administration. In fact, the 25th American Constitutional Amendment confers on the vice president the power to oust the president by declaring him incapable of executing the duties of his office.

Thus, the positions of the prime minister and deputy prime ministers may be turned into Executive largesse to reward kith and kin. In practice, this could be used in future as a strategy for the leader(s) to remain in power personally or through proxies, thus entrenching a system of survival for the fittest. This way, preservation of favourable copies of self in government posts and successive regimes cannot be ruled out.

Reinforcement of the position of Leader of Opposition in the House is noble and essential. It aids the ritual of democracy. It should not be an appeasement exercise calculated to quench the spirits of the disgruntled. Yet, it can be achieved through statutory underpinning that is more flexible to operate like the Indians have it, as against a rigid constitutional mechanism.

Apart from being the runner-up in a presidential election, his party or coalition must command a minimum membership of 25 per cent in the National Assembly. This portrayal in the reggae report lacks effective checks and balances against communalising the presidency. The ascendancy of coalition politics devoid of ideology in Kenya heightens scepticism.

These kinds of initiatives are not necessarily democratic. They do not echo any shared problem-solving or common solutions.

Due to lack of a regulatory framework, the industry has not only become a nuisance, it is also a national security threat

By Pascal Mailu and Pauline Kedogo | 5 hours ago

By Patrick Amoth | 7 hours ago

By Lynet Otieno | 18 hours ago

We know what the Creator demands, let's do it
;
Feedback