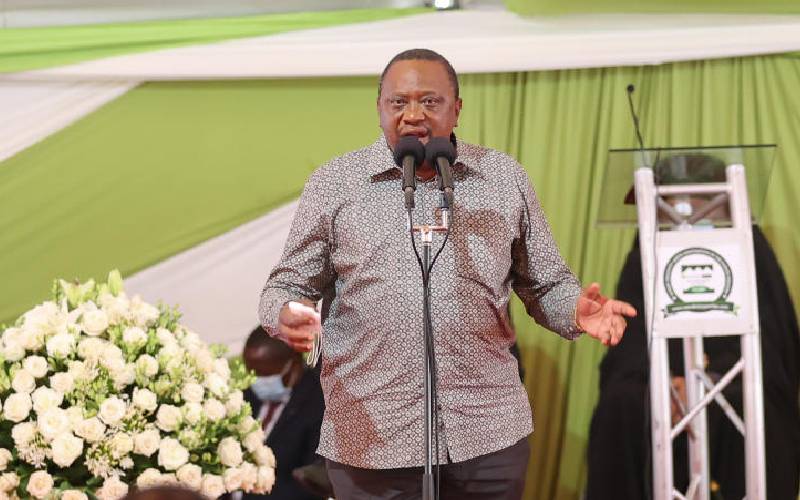 For years, the question of whether Kenya is ready for a rotational presidency has been a deceitfully calm volcano waiting to erupt. And it erupted at the funeral service of Hannah Mudavadi, the matriarch of one of the most illustrious Quaker families in Western. Ironically, the founding doctrine of Quakerism is “friendship and peace to all, and absolute abhorrence to all forms of violence and bloodshed”. Indeed, Quakers are better known as “the Friends’ Church”.

Were President Uhuru Kenyatta to borrow a leaf from the late US President John Fitzgerald Kennedy, and write his own version ‘Profiles in Courage’, ANC Party leader Musalia Mudavadi would, perhaps, be accorded the foremost chapter. Mudavadi stands out as the friend, who had the courage to prioritise national interest above the burning partisan desires of his ethno-lingual heritage. Mudavadi put his then fast-rising political star on the line by standing with Uhuru’s first bid for the presidency in 2002. That Uhuru chose the solemn moment of his friend’s mother’s funeral to make the pronouncement was telling.

The political eruption could, rightly or wrongly, be attributed to the perception that the pronouncement was specifically aimed at his deputy William Ruto; the second friend who would no doubt have a compelling case for the same foremost chapter in Kenyatta’s version of ‘Profiles in Courage’. Ruto cast his lot with Uhuru on his second and third contests for the presidency and were both declared the winners against all odds.

Kenyatta’s pronouncement has generated a lot of heat but very little light. For those from the Edward Carey Francis tradition, the cardinal rule is “to start from the known and logically delve step by step into the unknown”. For us, the starting point is the Constitution.

The Constitution does not enumerate tribes. However, it recognises the diversity of Kenya. Further, it demands that all government institutions comply with the principle of inclusivity. While tribes are not enumerated, the Constitution provides for 47 counties. A study of the counties in terms of predominant ethno-lingual characteristics allows a broad grouping into nine clusters.

Since independence in 1963, Kenya has held 12 presidential elections out of which winners have come from only Kiambu, Baringo and Nyeri counties. These counties belong to only two of the nine clusters of counties. The undercurrent discussion among most of the other clusters has been “as to whether the electoral democracy has been inherently weighted in favour of candidates from these few clusters and against candidates from other counties”.

Over the same period, six elections have been held for the Anglican Church head. In all, winners have come from different counties; Vihiga, Kiambu, Embu, Kitui, Bungoma and Narok. The six counties represent five of the nine clusters of the counties. Despite the challenges presented by the Ranked Choice Vote, which vote is used to elect the primate of the Anglican Church in Kenya by an Electoral College, the electoral system can be said to offer “a reasonably level playing field to all candidates irrespective of their county of origin”.

Uhuru’s pronouncement attracted immediate reaction by his deputy whose position is that “candidates contest and get elected into the office of president as individuals not as tribes”. The reality in Kenya is more nuanced than that.

On the other side is former PM Raila Odinga, who would also stake a claim to the foremost chapter in Kenyatta’s ‘Profile in Courage’. He holds a diametrically opposite opinion. In Raila’s words, “probably, the time for a different tribe to lead Kenya is now; there is nothing wrong with rotational presidency as countries like Switzerland have succeeded at it”.

What is not clear is whether the PM holds the position that “rotational presidency can be achieved through benevolence and gentlemen’s verbal pronouncements”. The truth is that the Swiss rotational presidency is provided for and guaranteed by the constitution. For a closer comparison, in 1994, Nigeria’s gentleman’s agreement for rotational presidency between the Muslim North and Christian South was promptly ignored.

In Kenya, the constitutional moment for ‘Rotational Presidency’ was missed by the BBI when the task force ignored presentation by Ratiba kuOkoa Taifa isiAngamie, and other similar presentations. Biblical King Solomon once wisely counselled that “there is a time for everything”. No doubt, this is the time for us to decide whether Kenya is ready for rotational presidency, as a model for peaceful, amicable and friendly transfer of state power.

Mr Nyongesa is the director of Rota Foundation.