We’ve a golden chance to fix years of disunity 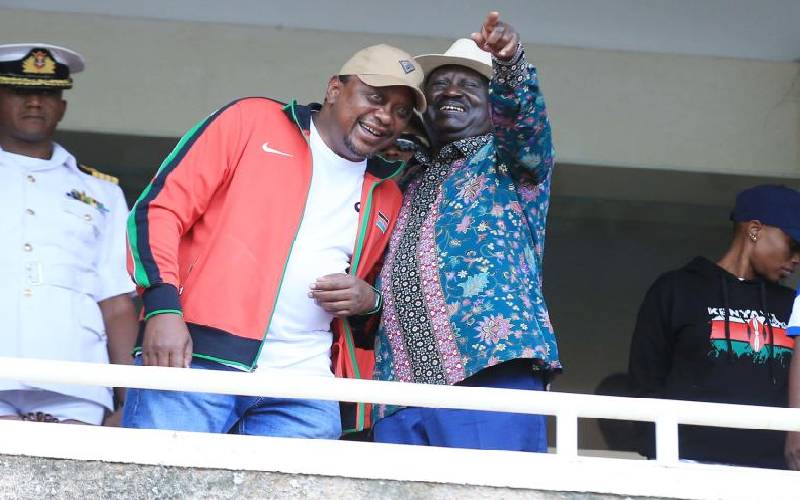 We should all remember exactly where we were on the day before the March 9, 2018 handshake between President Uhuru Kenyatta and Opposition leader Raila Odinga at the foot of Harambee House, Nairobi. The nation had just held a defective election which the Supreme Court ruled was illegal and nullified. It was a massive gain for the rule of law and our new Constitution. But the country remained divided. It was followed within a short time by another election. But this re-election was boycotted by one side. The country remained divided. The legitimacy of the re-inaugurated president was challenged. Street demonstrations followed. More divisions.

Armed police were sent in and brave young people were dying week after week. More division. There were extra-judicial killings. A ‘people’s president’ appeared before a huge crowd in a national arena. We were in a continuously divided country, continuously questioning the legitimacy of our own government, continuously using our police as an army against our own people, our young people continuously dying on our streets. Have we forgotten all this? What stopped all this? It was the handshake. The proponents said the structural unity of Kenya is what the Building Bridges Initiative (BBI) that came with the handshake is about.  These weighty challenges have been perennial. It is therefore not productive to say that we should not try to solve them. The objections most often made are that BBI simply creates more ‘jobs for the boys’, that it will return the same group of the ‘political elite’ who will be the only beneficiaries, that it will be ‘ethnic politics’ multiplied, that there will be ‘no Opposition left’. Was all this not exactly what did happen even under the 2010 Constitution in the 2013 and 2017 elections that followed? Were the numerous Cabinet, Chief Administrative Secretaries and ambassadorial postings not ‘jobs for the boys’? Did the political elite not remain the same, and did they not benefit as before in the five years between 2013 to 2017 that followed?

We have a great Constitution. But despite its provisions, our disunity has continued. South African freedom fighter Breyten Breytenbach once said: “The spirit of the new constitution intends us not to repeat the injustices of the past.” So should we not begin taking steps again to repair, as best as we can, these recurring fault lines?  We are a nation of many peoples and we all want to know we are reflected in the national leadership, that we are somewhere on the table where decisions are made and that we will get a fair share of what is being divided up. And because, since 1963, we have failed to find the constitutional formula that structurally ensures this, we have remained disunited.  A constitution is not only a manual of relationships in working a state. It is also a specific correction of what has ailed a country to prevent the repetition of the failures of its past. Thus specific prescriptions are also to be found in a constitution. They are specific to the country, and may not be part of any constitutional theory or best practice elsewhere. Thus, if we propose deputy prime ministers or deputy presidents, it does not flout any constitutional theory. We are trying to solve our constitutional problem. Kenya looks to see what has caused her failures. The primary cause is that we have not shared power, resources and aspirations equally or equitably among our diverse peoples.

We are the best judges of what might work, not constitutional theory. The proposals may not wholly solve our problems, but it may take us a few steps forward and prevent too many steps backwards. The handshake is one such possible solution. More correctly, it was the start of a process of a solution. It is a Kenyan achievement. We should value it. We should not dismiss it lightly. Other countries are similarly divided. In the US, concerns around its president have led to impeachment. Their police too are seen as being used as an army against the people. Young people are dying on their streets. Protests are ongoing. Yet their president has not seen fit to arrive at a handshake with his perceived opponents. We have had 50 years of distrust among Kenyans. As a result, we have had thousands killed, hundreds of thousands arrested, millions have become refugees in their own country, and tens of millions not believing in the unity of their own country. Time to go back to the anvil, and hammer some more. Moving from the steps taken on and after March 9, 2018, it is important that we support what’s working for us and make them work for the next generation and the next.  Although there may be disadvantages in BBI proposals, we should not stall the attempt. There are disadvantages in every solution that we could apply. The British illegalities in the House of Commons in Brexit show that all constitutional systems are frail, that no system is perfect because none of us is perfect. But we should keep moving forward, refining where we can. What we should ask ourselves is: Are the proposed steps such as may effectively generate more national cohesion, and therefore more unity? This is the real test. -The writer is a Senior Counsel and a constitutional and human rights lawyer