Why should we pay rich Raila, Kalonzo millions? 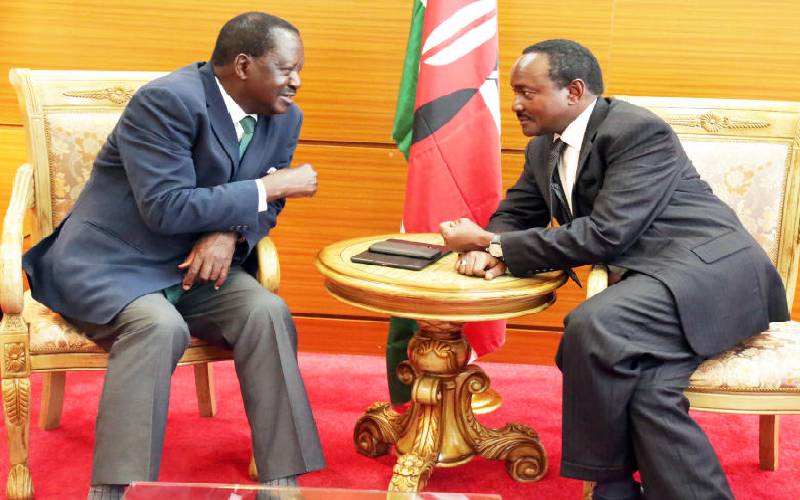 Guys, the government wants to tax the small-small pensions of ordinary people. At the same time, the Cabinet Secretary of Finance wants to dish out big monies to an elite group of aging men as a thank you for their ‘service’ in state office. Between them, Mwai Kibaki, Moody Awori, Kalonzo Musyoka and Raila Odinga could take home Sh785 million in pension every year.

The offices of Messrs Odinga and Kalonzo have also been allocated Sh72 million each to cater for employee wages, insurance, the purchase and maintenance of vehicles, fuel, and office furniture. If you’re thinking, ‘which offices?’ then we are together. What do these offices do? And how do those of us who are not employed by them benefit?

If you’ve never met crazy, then let me introduce you. I mean, what kind of government prioritises the privileges of the 0.0000000001 per cent over the basic needs of more than 50 million people? It defies any logic you might want to come up with. Look, before this ‘makasiriko’ year began, we were already in debt. Then along came the new coronavirus. A pandemic that started off as a public health crisis morphed into a security operation, became a ‘time to eat’, and then a conduit to settle political scores.

So we had debt, and then we had Covid-19 (during which we went even deeper into the red), then we had this vicious circling back to a politics of cloaks and daggers, and now we have a Sh2.79 trillion budget, 30 per cent of which will be funded by even more debt. Never mind that thanks to Covid-19, we are now at higher risk of debt distress.

That same-same budget is not only proposing to dish out millions of shillings to former holders of state office, it also gives national security, education and infrastructure more prominence than health. I mean, if you’ve never met ludicrous, let me introduce you. Aren’t we supposed to be in the grip of a global pandemic? Aren’t we supposed to be in the middle of a worldwide health crisis? Aren’t we? I guess that’s a question for another day.

And please don’t start with the comparisons to other countries; how in the US this, in Burundi that, or in North Korea the other. Those comparisons are non-contextual. We live in a young African nation. More value needs to be placed on the lives and livelihoods of the underserved, than on the perpetuation of privilege for a select few. Common decency demands that a premium is placed on the greater good.

Instead, our leaders drink from golden and silver vessels as we watch. We expect them to nurture, mentor, and uplift but they consistently reward our faith in them with outright exploitation. It seems like a hopeless situation. Like we are stuck in a bottle and our government has the bottle top. But while we are still alive, all is not lost. The days of any kingdom are numbered. The balance of good will eventually outweigh that of evil.

Eventually, a change is going to come. And if you think change cannot happen, allow me to introduce you to America. America is at a seminal point in its history. Folks are falling over themselves to identify with black people. To affirm black culture. To associate themselves with the emancipation movement. To align themselves with black issues and interests. All of this in the era of a president whose tenure has been defined by bigotry. So, yes. Change can come.

But if we use the US as an example, change usually arrives on a road that has been paved by the conscious resistance of systems that entrench inequality. Change arrives when citizens are relentless about their engagement with the state and its institutions, with politics, and politicians. I will confess that since 2017, heck since 2007, the very idea of being an active citizen has been repulsive because of the cruel and insensitive nature of modern-day politics.

That is, ‘politics’ as we have come to understand it. But a long time ago, in a land faraway, engaging in politics was a matter of civic responsibility. Those who shunned their duty were considered apathetic, uneducated and ignorant.

In fact, ‘idiot’ derives from a Greek word and is loosely translated to mean selfish. Clearly, there is more value in political participation and collective governance than there is in this man-eat-man culture that is blooming in Kenya today. Oftentimes it seems more efficient to go it alone, to look out for number one. But like it or not, we — the people —are better together.

By Godfrey Ombogo | 11 hours ago

By Okwaro Oscar Plato | 19 hours ago