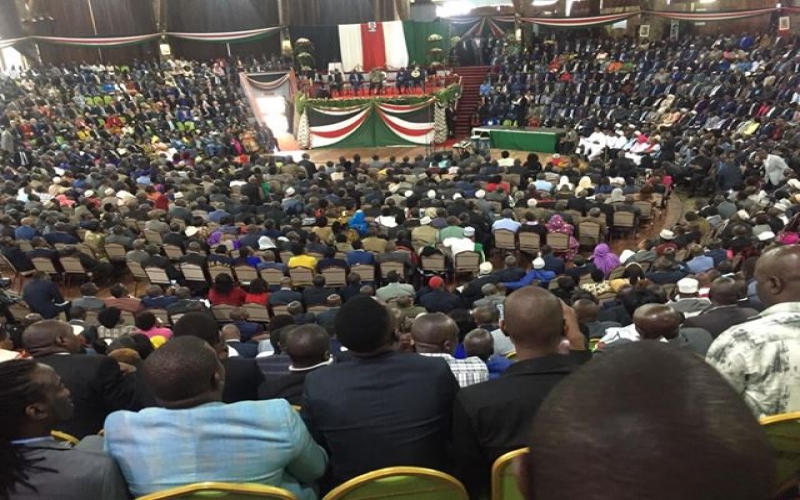 Kenya’s politicians never disappoint. After a day of back-patting and “across the aisle” lauding of the “handshake” and the BBI report in Bomas, it took them less than 24 hours to go at each other hammer and tongs. The first shots were fired in Bomas, primarily by the two parliamentary Majority Leaders Aden Duale and Kipchumba Murkomen. While Duale, a more wily and seasoned politician expressed his angst respectfully, the bombastic Senator for Elgeyo Marakwet pulled no punches, literally calling the event a choreographed sham. By the second day, the new fissures had been defined; the “anti” group, identified with Deputy President William Ruto, insisted that the report must go through Parliament supposedly out of a concern that a referendum would grossly damage our economy.

The “pro” group, which is generally identified with the handshake, rejected the Parliamentary route, purportedly out of a concern that the report would be hijacked from “the people” to whom it rightly belonged. Behind these newly discovered pro-citizen concerns, one for money and the other for people’s participation, is an awareness that matters like BBI, that have huge political overtones, are never decided on the merit or otherwise of content but on politics. Consequently, each of the competing wings is pushing the process towards the arena in which they believe they have a comparative political advantage. Lost in this new session of hurling brickbats is the report. Having listened to many in the political arena for the last week, I would be willing to bet that only a handful have read the report; and even they have read the summary, not all the 160 pages.

The poor Kenyans who have now taken positions for and against a referendum are totally in the dark about its contents, save for those titbits they will have savoured from pundits traversing the various radio and TV talk shows. The tragedy is that the way the conversation is going, the substance of the report will be drowned out by the political noise.

What many Kenyans fail to realise, because they haven’t bothered to read the report, is that more than half of what the report recommends is stuff that the government can do without going to Parliament or the people. And since the BBI taskforce was a government initiative, the assumption is that government agrees with the proposals therein. Without a single change in the law, the government can ensure the construction of pedestrian-friendly roads as the report proposes. The government requires no major changes in the law to invest in youth empowerment including the tax breaks. Nothing stops government from transferring functions to counties or closing down duplicating parastatals. Even increasing allocation of money to counties to 35 per cent requires no change in the law.

Consequently, what we should be doing now is extracting those administrative actions that government can do immediately, creating a BBI Rapid Results Initiative process and holding government accountable to perform the identified tasks. Some few proposals will require statutory changes. Since the “handshake combined” wing has sufficient numbers in Parliament, what it should be doing now is translating the statutory proposals into Bills so that they can be passed and the proposals therein implemented. That would leave only the constitutional changes that are proposed by the Bill including the restructuring of the Executive and Parliament. This will require either a two thirds majority in both Houses or a people’s initiative. The latter process will involve the county assemblies, Parliament, albeit with a lower threshold, and the people in a referendum if Parliament fails to pass the amendment.

Unfortunately, all the noise about BBI is about this latter component of the report. This aspect may be most exciting but not necessarily the most critical. It may eventually be resolved through some political compromise.

To spend so much energy on it is a wasteful distraction and denies us the opportunity to demand that government implements its own report to the betterment of its citizenry. Who will save us from ourselves?