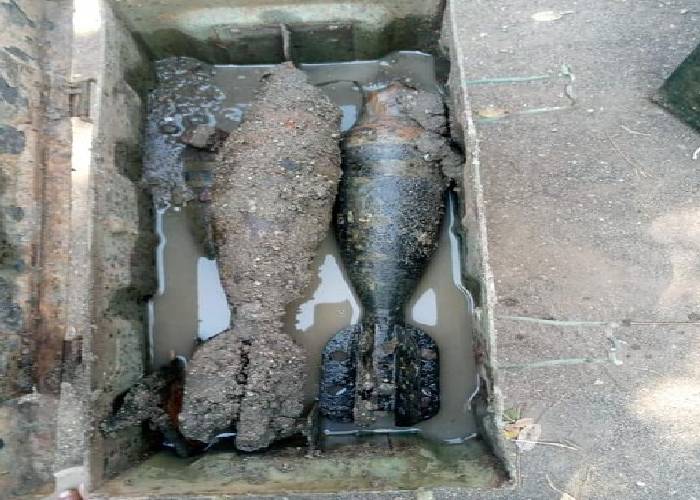 The discovery was made near Mbita town by a group of fishermen on Wednesday according to the Directorate of Criminal Investigations (DCI).

DCI said five fishermen cast their net in the lake and had started pulling their gears out when they caught something heavy and strange like a big Nile perch.

The fishermen downed their paddles joined hands in hauling their heavy net back to the craft only to tumble on a metallic box.

“The fishermen were shocked when they discovered they had caught a heavy metallic box, instead of the expected Nile perch,” he said.

To discover what was in the box, the fishermen broke the metallic box only to find six, 60mm mortar bombs.

Fearing that the mortars could explode, two fishermen jumped into the lake notwithstanding the danger they were putting themselves into.

The remaining three, however, quickly rowed the boat to the shores of the lake and reported the matter to Mbita Beach Management chairman Isaiah Ouko, who informed detectives based at the town.

The detectives informed the Kisumu bomb disposal team which rushed to the scene and took possession of the cache pending controlled explosions.

“The Mbita-based detectives immediately notified their Bomb Disposal and Hazardous Materials counterparts based in Kisumu, who rushed to the scene and took possession of the cache.”

Investigations are underway to find out how the weapons found themselves in the lake.

They possessed 2,200 yards of effective range and were designed to fire all types of the older ammunition, but its primary rounds are of the newer, longer-range type.

Mortar bombs have been used for hundreds of years, but the earliest mortars were used in Korea in a 1413 naval battle when Korean gunsmiths developed the gourd-shaped mortar.

By Patrick Vidija and James Omoro | 4 days ago