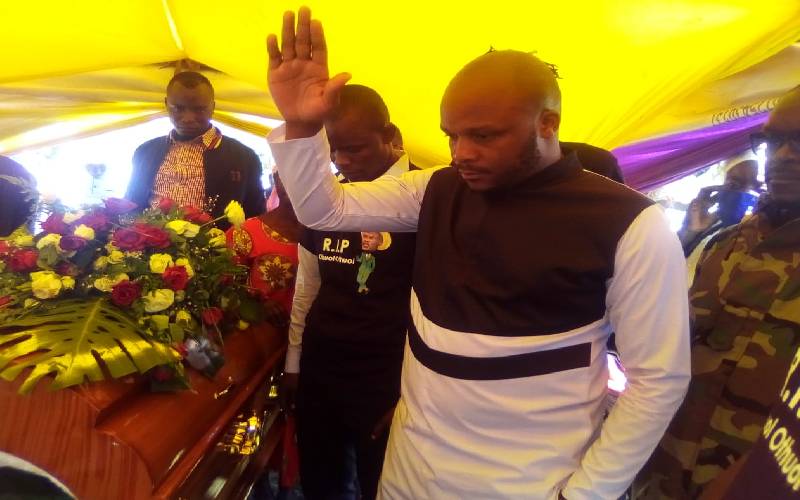 Despite being a funeral, there were light moments when the artistes took to the stage with Otieno Aloka's Kanungo song, which the late Othuol loved most.

When they took to the stage, the artistes danced to celebrate the life of their departed colleague.

The artists led by Felix Odiwuor aka Jalan'go eulogised the departed artist as a stubborn but talented individual.

According to Jalan'go, he is mourning his son.

"When he came to Nairobi, he said that he wanted to be like me and I gave him the platform," said Jalan'go.

The late Othuol's aunt Rose Apondi said he started living with him when he was three-year-old.

"He went to Nzoia Primary School when he was nicknamed Othuol because his waist was small. He started making people laugh when he was in Class Four," Apondi eulogised him.

Othuol Othuol died on October 11 after a long struggle with a brain tumour.

He died at Kenyatta National Hospital in Nairobi, where he had been receiving treatment.

The comedian has been in and out of hospital since last year and once sought support from the public in dealing with an undisclosed sickness and depression.

He was diagnosed with tuberculosis about 10 months ago and was admitted to KNH and discharged after six months.

Friday Chat with George Maina aka (Njoro) of Churchill Show