Matiang’i says nobody would be blocked on Mashujaa day 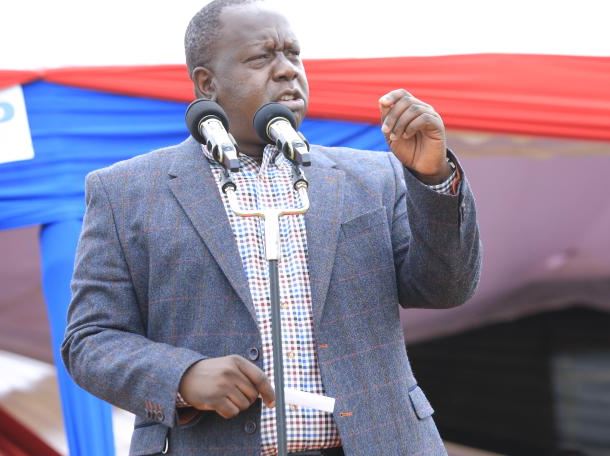 No one will be locked out this year's Mashujaa Day to be held tomorrow, Interior Cabinet Secretary Fred Matiangi has said.

Dr Matiang'i (pictured) was responding to claims by some leaders allied to Deputy President William Ruto that there were plans to block some politicians from attending the event that will be presided over by President Uhuru Kenyatta.

Matiang'i, who was speaking during the burial of his uncle Samuel Marube at Etago Sub-county in Kisii County, said the government would not allow anyone to cause chaos during the event.

"It is a great honour to the people of Kisii County that the celebrations can be held here. Let everyone accord the day the respect it deserves. Nobody will be allowed to cause chaos," said Matiangi.

He explained that he will not respond to political leaders who have been abusing him. "We have senior leaders from Gusii. It is not fair for elected leaders from this region to go around the country abusing me and other leaders. If there are any issues let us sort them out amicably," said Matiangi.

He expressed his willingness to work with South Mugirango MP Silvanus Osoro who has been one of his harshest critics, saying the youthful legislator required guidance in order to develop his leadership skills.

Governor James Ongwae said Matiang'i should be respected and supported by all leaders from the region. He added that it was time for the Gusii community to sit at the national high table.