By Betty Njeru and Eric Abuga | 2yrs ago 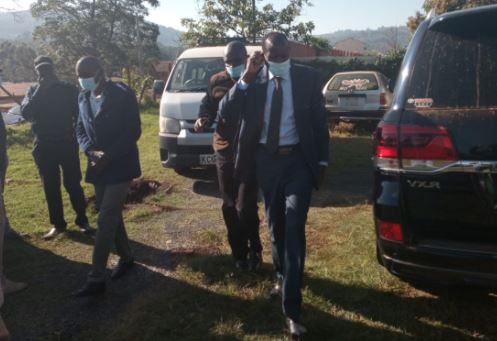 The following is our earlier coverage of his tribulations this morning:

Migori Governor Okoth Obado (pictured) has arrived at the Ethics and Anti-Corruption Commission in Kisii, to answer to corruption charges.

There was a heavy police presence at the EACC Kisii offices on Wednesday morning, Standard Digital has established.

Obado, together with nine other suspects who appeared at EACC will be transferred to Nairobi for arraignment and formal charges. One suspect is still at large.

On Tuesday, the Director of Public Prosecutions Noordin Haji had ordered the arrests of the governor, his siblings, four children and business associates over the alleged embezzlement of Sh73.5 million from the county coffers.

The anti-graft agency sought Haji’s consent to charge the individuals with four counts among them; conspiracy to commit an offence of corruption, conflict of interest, money laundering, and unlawful acquisition of public property.

According to the DPP, the EACC launched a probe into the case through the governor’s designated proxies and employees of the county government.

“The investigations were in respect to Sh73,474,37.90 being the sum indirectly received by the governor, through his children who received multiple payments from companies trading with the county government between financial year 2013/2014 and 2016/2017 and further in respect of the purchase of the property at Loresho Ridge,” the DPP said.

Haji further noted that he was satisfied that there was sufficient evidence to charge the mentioned persons with various criminal offences.

It is not the first time the Migori governor has come under probe.

In November 2018, Obado was again arrested after eight firearms were found at his various homes during a raid by EACC detectives.

Five of the firearms were recovered in Nairobi and three at his home in Migori.

The raid was linked to investigations into alleged questionable tenders totalling over Sh2 billion.