Former Wajir Governor Ahmed Abdullahi is confident he will clinch the Wajir gubernatorial seat in 2022 after being endorsed by the Degodia clan.

Speaking to The Standard on phone after the endorsement, Abdullahi thanked the elders for endorsing him, pledging not to disappoint them.

“This is an opportunity to serve my people once again, and I will have to prove to the masses that I am their best bet,” he said during a phone interview.

The ex-governor also said the endorsement has handed him the power to build alliances across the clans and in the entire county.

“I will now approach other leaders and clans so that we can come up with a formation that will guarantee us victory,” he said.

He blamed the leadership wrangles that marred the county on the political forces that teamed up against him in 2017.

“They used to accuse me of hind-handedness because I stood firm to protect our people’s resources, but when a new governor who listened to their parochial interests came in, they mess the county,” he said.

“I was a firm leader, not a dictator and that is how I managed to achieve a lot during my tenure.”

Abdullahi was endorsed by over his 500 representatives from nine of the 10 Degodia sub-clans to succeed Governor Ahmed Ali Muktar.

The ex-county chief got a boost after he was endorsed by his Mantan sub-clan before the over 500 elders drawn from the nine out of the 10 sub-clans of the Degodia community rallied behind him.

The elders said the former governor deserves a second chance, citing his development record that transformed locals’ lives between 2013 and 2017.

He said the community will now seek support from other tribes ahead of the 2022 polls.

“The Mantan community has nominated Ahmed Abdullahi, their gubernatorial candidate for the 2022 General Election,” said Salat.

Omar Hajji, another representative of the sub-clan said Abdullahi’s credentials and performance make him the best candidate for the county.

“During his [Abdullhi]’s reign Wajir County was one of the counties being cited as a good example of a working devolved unit,” Hajji observed.

The elders also agreed to back ODM leader Raila Odinga in the forthcoming State House race.

On the recent endorsement of EACC deputy director and head of the Coast region Hassan Wehliye by the Fai sub-clan of the Degodia, Abdullahi said he was only interested in what happens in his Mantan sub-clan and not in other sub-clans.

“There are two levels of endorsements at the clan and sub-clan level, I don’t want to comment on what another sub-clan is doing,” he said.

Abdullahi said if elected, he will complete all the projects which have stalled in the county since 2017.

He said it was sad that the projects he initiated before leaving office are yet to be completed yet there is an administration that runs the county.

Abdullahi is likely to rely on the networks he built in the country between 2013 and 2017 to his advantage having been rated one of the best governors by locals.

He will also take advantage of the wrangles that marred the county leadership after 2017 that culminated in the impeachment of his predecessor Mohammed Abdi in May 2021.

Politics in Wajir County revolves around Degodia, Ogaden and Ajuran.

Wajir county has six constituencies, with four inhabited by the Degodia sub-clans.

As of yesterday, a total of 5,482,089 vaccines had so far been administered across the country.

A judge has ruled that the assembly contravened the law in the recruitment of the clerk, Jacob Kirari.

By Judah Ben-Hur and Moses Nyamori | 7 days ago

By Abdimalik Hajir | 13 days ago 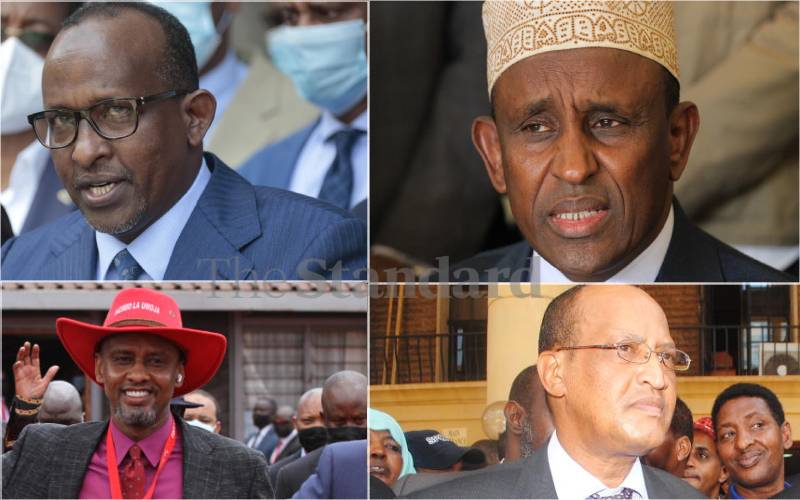 By Abdimalik Hajir | 20 days ago