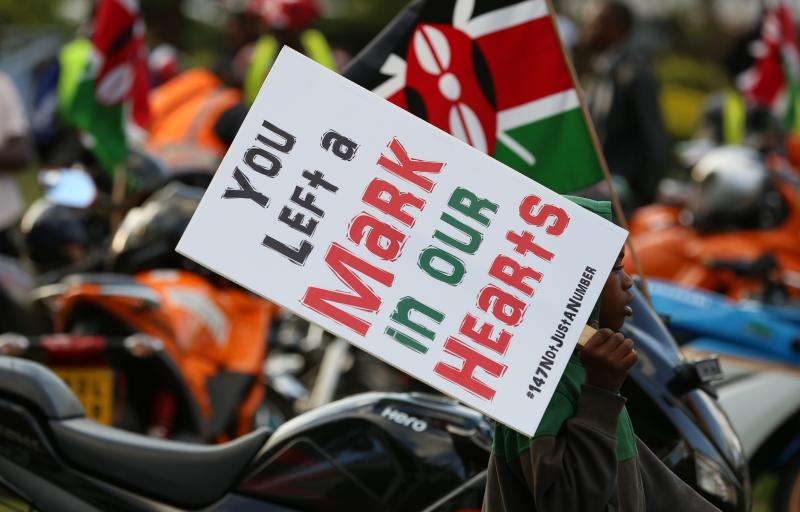 More than 30 parents of students who were killed by terrorists at the Garissa University have filed a petition at the High Court seeking a report on the attack.

The parents want the court to compel the Independent Policing and Oversight Authority (Ipoa) and the Commission on Administrative Justice to furnish them with details touching on the massacre of 148 people.

“The issues raised in the petition are social and touch on terrorism, human rights and national security, which have not been considered in any other forum in the country,” said their lawyer John Mwariri.

The parents say their petition raises questions on whether there is an obligation on the part of the State to provide security in times of a terrorist attack.

The parents, who are seeking compensation for the loss of their children's lives, also want to know what time an elite squad of the General Service Unit arrived at the university.

They want to know if the Recce squad faced delays before arriving in Garissa, and the effects of such a delay in preventing and mitigating effects of the attack.

“My clients are seeking information on the response and coordination of security officers,” said Mr Mwariri.

The petitioners also want to know whether any State officers were found culpable following the attack and whether they were interdicted.

“There is great public interest in disclosure of the information to ensure they obtain a remedy from the court and promote accountability among public bodies and servants,” said Mwariri.

But Mwariri said the country's security will not be prejudiced, adding that the courts can apply various measures to protect any sensitive disclosures.

Justice James Makau directed the parties to exchange their submissions and set hearing for February 24.