By Victor Nzuma | 9mos ago

Ukambani politician Francis Kalinzoya said the movement, launched in Nairobi on Friday at Kasarani, Nairobi, had the muscle to clinch the country’s leadership come next year.

He urged Kalonzo to quit the One Kenya Alliance and join Azimio la Umoja. Kalinzoya said the community should not allow itself to be left behind.

“It was unfortunate and in bad taste to see Ukambani governors missing at the historic event. Only Kitui Governor Charity Ngilu attended,” he said.

He, however, excused Wiper party leader Kalonzo Musyoka for skipping the event as he had been on a trip to South Sudan.

Kalinzoya said the Kamba community cannot afford to be left out of the next government, saying it will mean they miss out on the national cake “in Raila’s government”.

“It is my request to Ukambani leaders to read the signs of the times and make a decision that will settle the community in a comfortable political zone” he said.

He said the Kasarani event was an indication of how things will unfold in 2022. He urged local leaders to give direction to the community. “Who are we to ignore such a formidable force that has all indications of forming the next government? Even Mt Kenya forces have joined it,” he said. 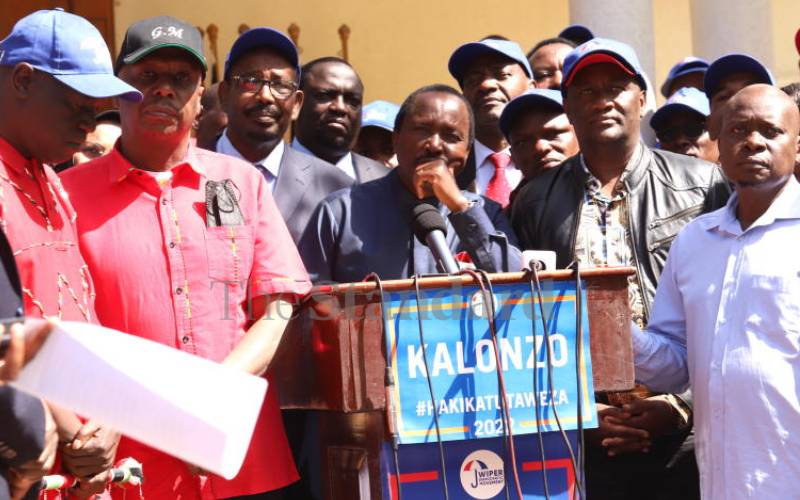 Premium The deal Kalonzo could not resist
An evening meeting late Wednesday convinced Wiper chief to return to Raila camp.
Politics
By Jacob Ngetich
4 months ago
.