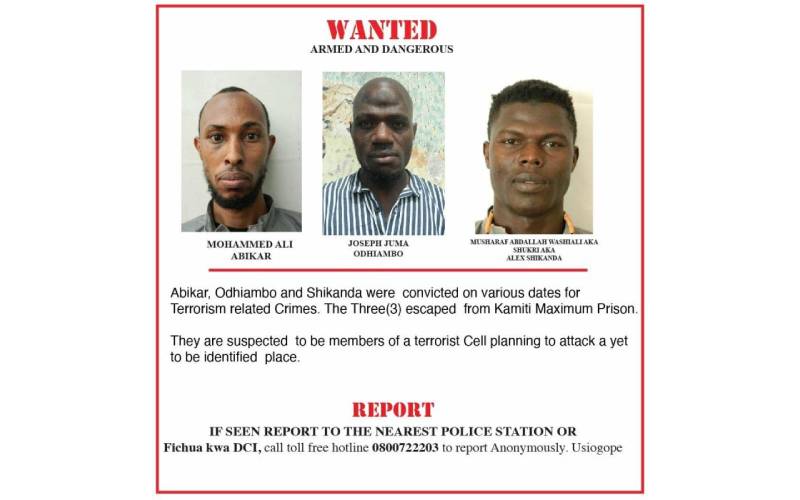 Mystery abounds as to the circumstances under which three terror convicts escaped from the country’s most guarded prison.

Immediately, the Directorate of Criminal Investigations (DCI) placed a Sh60 million bounty- Sh20 million for each of the three- for any information leading to their arrest.

The incident came in the wake of another shocking incident a month ago where a serial killer- Masten Wanjala- walked out of a police station where he was being held. It also came two days after Lang’ata police arrested a terror suspect who was seeking information from a cop.

“Arising from this, in the company of my senior officers, I visited the institution to establish the circumstances that led to the unfortunate incident. The matter has been brought to the attention of all security agencies in the country with a view of tracking and apprehending the escapees,” Ogallo said.

While he did not divulge the circumstances, it is suspected that the three used a rope to leap over the high walls. Initial reports also indicated that prison authorities suspected foul play, with guards on duty being questioned.

Abikar was on June 2019 convicted, alongside two others for the 2015 Garissa University terror attack that killed 148 people among them three members of security forces and three university guards. The rest of the victims were hapless university students.

Abikar, alongside another Kenyan- Hassan Aden Hassan- was sentenced to serve 41 years’ prison sentence while their third Tanzanian accomplice Rachid Charles Mberesero was sentenced to life in prison. Unlike his colleagues, Mberesero had been arrested at the scene of the massacre that shook the whole world.

In November last year, Mberesero committed suicide at the same prison, according to a police report.

“He committed suicide at around 1520hrs at his ward (Block H) using an improvised rope from a blanket. The deceased was a psychiatrist patient and was on medication,” a police report at the time read.

The incident surprised many given the convict was a high profile convict on constant watch of the guards.

In convicting them, Justice Francis Andayi said he was convinced that the three were members of the Al-Shabaab terror group whose members executed the heinous attack.

The second escapee- Musharaf- had been arrested on September 30, 2012, over an attempt to conduct a terrorist attack at parliament buildings. He was charged with possession of explosives, ammunition and firearms.

“The National Police Service informs members of the public that Musharaf is dangerous and appeals for any information regarding his whereabouts,” DCI notice read.

When he was arrested in Malindi, Musharaf disclosed that his team was targeting three Nairobi nightclubs. At the time, the country was reeling under constant, sporadic attacks blamed on Al Shabaab militant group.

The crescendo of the sporadic attacks was the September 21, 2013 Westgate Mall attack in which over 70 people were killed by gun-totting terrorists.

The third escapee, Odhiambo, was arrested on November 21, 2019 in Somalia side of Bulla Hawa town, while attempting to join the Al Shabaab terror group. Police say he hails from the Lukoye area of Mumias, Kakamega county.

He’s also said to be dangerous and any information regarding his arrest will be rewarded with a Sh20 million prize money.