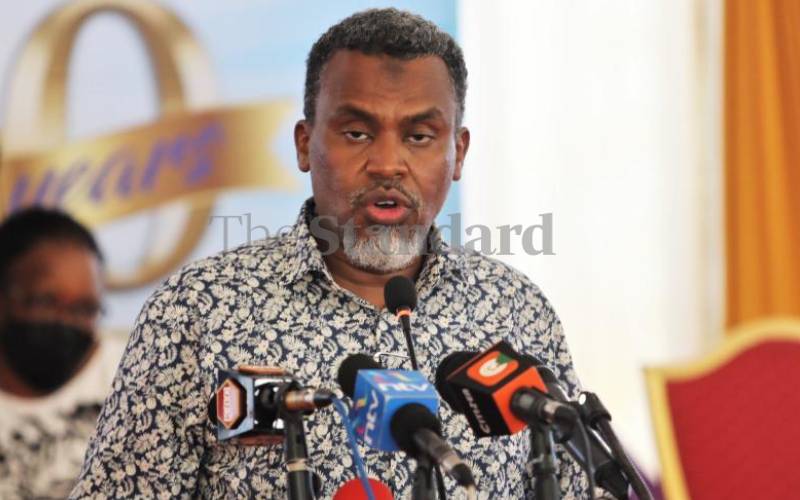 Director of Public Prosecutions (DPP) Noordin Haji (pictured) has alleged a plot to kick him out of office by a clique in the government trying to usurp his constitutional mandate.

In a clear sign of an escalation of the supremacy wars in the criminal justice system, Mr Haji yesterday said he would not to give in to demands of those “thinking I don’t know the law.”

Giving an analogy of the donkey and the tiger on the difference of the colour of grass, the DPP likened those criticising him to the donkey that insisted the grass is blue, when the truth is, it’s green.

“I don’t want to be the donkey, we all know the grass is green. I may fall but I can assure you the next DPP who will come from amongst you (delegates), will come with much gusto to pick up from where I will have left,” he said.

He was speaking in Mombasa during the commemoration of 10 years since the establishment of the National Council on Administrative Justice (NCAJ), which brings together his office, the Ethics and Anti-Corruption Commission (EACC), the Chief Justice, the Inspector General of Police, the Directorate of Criminal Investigations (DCI), among others.

“The pen has written and the ink has dried, we will not allow anybody to mutilate this Constitution,” said the DPP, who lately has run-ins with DCI boss George Kinoti over prosecution of various cases, including the murder of businessman Tob Cohen.

This comes days after lawyers Cliff Ombeta and Danstan Omari, representing the Cohen family, petitioned for the DPP’s removal at the Public Service Commission (PSC) over the case.

Another petition has also been lodged by businessman Francis Njeru, citing interference in a land case.

But Haji said: “Let me say this, the pen is mightier than the sword. Even if the sword apprehends, at the end of it, it’s the pen that decides. It is the Judiciary that will decide by the stroke of the pen.”

“I have fought very many battles, including going to Somali to fight Al Shabaab, and came back victorious. I will still win this one. The fruits and benefits of the constitution are right here and today, the women and members of the minority group are right here,” he said.

He called for harmonious working relationship.

“At times, partners overstep the boundaries of their constitutional mandate as they tend to take up the role of others. This ultimately obstructs the course of justice, with some partners unwilling to subject or submit themselves to constitutional scrutiny and accountability,” said Haji.

The DPP maintained that he has served the country diligently and will continue to do so without fear or favour. He called for strengthening of the justice system.

Kinoti, however, said his officers were pursuing facts and “will in the long run be vindicated”.

He said police officers will investigate all criminal cases regardless of the status of the suspect in society.

“We are following the truth and facts and at the end of the day Kenyans will know that we are the people doing the right thing,” said Kinoti.

Kinoti said everybody must be treated equally before the law, in an apparent reference to the recent standoff over the failure by the DPP to prosecute a judge. “We must apply the law equally without any discrimination, otherwise it is only the weak who will be subjected to the law, not the mighty,” said the DCI boss.

“For us police we treat all equally. There is no big man or small man when it comes to crime. We do not discriminate.”

Kinoti urged Kenyans to embrace dialogue whenever there is a dispute and obey the Constitution.

Justice Koome, who was the guest of honour at the meeting, steered clear of the clash between Kinoti and Haji. She promised to consult to solve issues affecting the administration of justice in the country.

“We will continue to consult with all the stakeholders to strengthen the court users committees so that we achieve the strategic plan,” she said.

Learning continued as usual at Moi High School, Kabarak yesterday after a fire incident that destroyed the boys’ dormitory on Wednesday evening.

Where is Felista Nyamathira? Mystery of millionaire student's whereabouts
;
Feedback