The IEBC has released the campaign expenditure limits for candidates and parties for the 2022 general election.

Furthermore, the commission submitted to Parliament the Election Campaign Financing Regulations on July 25, 2016.

The spending limit that a presidential election candidate may spend during an expenditure period is Sh4,435,565,094.

The nature of authorised items or activities for which campaign expenses may be incurred and for which the spending limits apply include the venue where campaigns may be undertaken, publicity material, advertising, campaign personnel, and transportation.

Others are justifiable expenses such as communication, nomination fees, security, accommodation, and administrative costs.

The spending limits that a candidate for county elections - governor, woman representative, MP - may spend during an expenditure period place the bar at Sh 123,080,609 for Turkana. 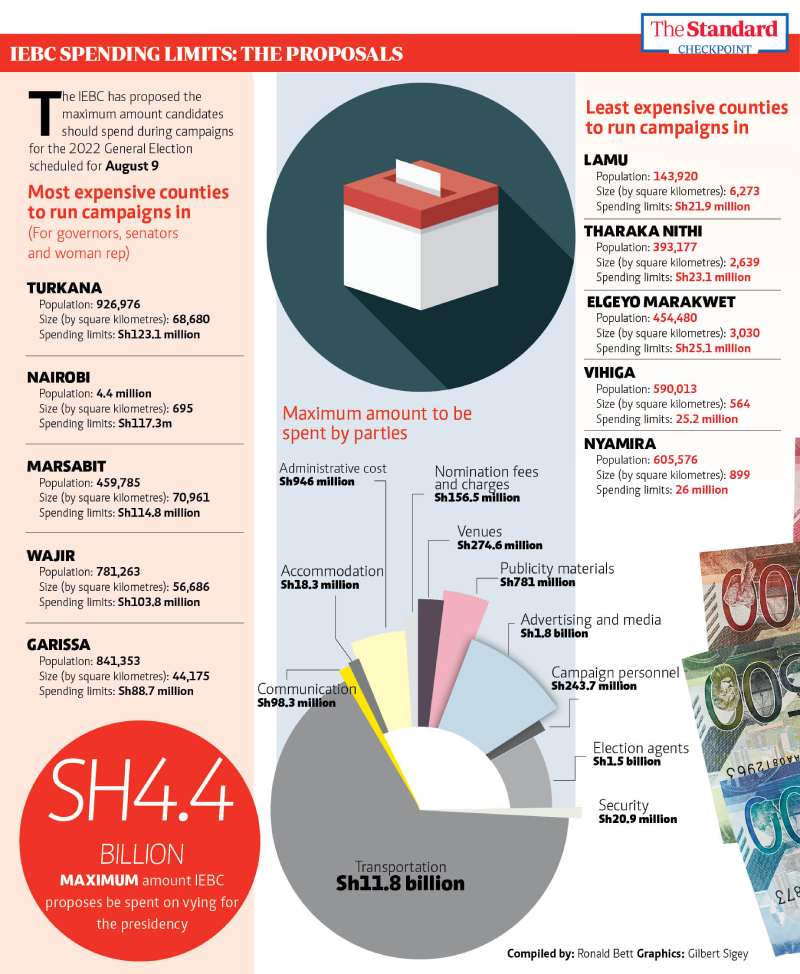 Wiper leader Kalonzo Musyoka has in the past said corruptly acquired wealth threatens democracy and Kenya’s quest for free and fair elections next year.

The Kioni Bill wants to repeal nine sections and amend four, which include the proposed establishment of a committee with three members. The IEBC wants the identity of the donor revealed, while MPs want this to be confidential and only made public in case of a probe.

A candidate or a political party that fails to disclose the funds or donations shall be disqualified.

Any political party or candidate flouting the regulations is liable to a fine not exceeding Sh2 million or a term of imprisonment not exceeding five years or to both.

The Kioni Bill seeks to define what monies intended for public use are as well as donations.

On spending limit, the MPs want to abolish the cap on the maximum threshold of money a candidate, political party or referendum committee may spend during campaigns as proposed by the IEBC in 2016 when the implementation of the law was deferred.

Chelsea have agreed in principle a 97.5 million pound ($135.24 million) club record deal to bring Romelu Lukaku back to the Premier League from Serie

By Paul Ogemba and Kamau Muthoni | 25 minutes ago