Director of Public Prosecutions Noordin Haji waded into uncharted waters when he executed a decision to legally hand over a Kenyan citizen to the US to face charges of wildlife trafficking.

On August 13 last year, a sealed brown envelope marked ‘URGENT’ landed on Haji’s desk. In it was a confidential document from Attorney General Kihara Kariuki’s office, requesting that he should move to court to seek orders to extradite Mansur Mohamed Surur.

Mansur, 60, had been arrested two week earlier and taken to the Jomo Kenyatta International Airport Court on July 30 as orders were sought to hold him.

The authorities could not risk having him roam free after another suspect, Abdul Aziz Saleh alias Badro, went off the radar after the long arm of the law caught up with him then set him loose.

Badro was arrested on June 11, 2019, and released by the same court on condition that he was to report to the Directorate of Criminal Investigations (DCI) daily. For four months he obeyed the orders only to vanish in January last year. The police are still hunting for him.

Extradition is not a mechanical process because Kenya has an obligation to have its citizens tried on its soil if the crime is committed in its jurisdiction. Haji had to grapple with whether the country had an extradition treaty with the US on poaching.

Despite Kenya not having such a treaty and the Wildlife Act giving local courts the power to punish Mansur, Haji penned his signature on ‘an order’ to extradite the father of one.

The DPP was persuaded that the evidence against the suspect showed beyond reasonable doubt that the crime that the Americans wanted to jail Mansur for was a transitional one. At the same time, the evidence was that Mansur and his accomplices were mostly killing rhinos and elephants in Uganda and not in Kenya.

Mansur’s run-in with the US was not on animal trophies alone; he was also wanted for supplying and selling heroin. On this alone, Haji knew the court would side with him that Mansur needed a direct ticket to have his day before the Southern District Court of New York.

For wildlife trafficking, he decided to rely on the United Nation’s convention against transnational organised crime. This was the first time he was using Kenya’s agreement with the UN for an extradition.

Ms Mwaniki, the lead prosecutor, submitted that the charges Mansur faced were serious; he was likely to spend a minimum of 15 years in jail for three counts of wildlife trafficking, a fourth count on money laundering attracted at least 20 years, while the fifth count on narcotics meant there was a likelihood he could spend the rest of his life behind bars.

“We humbly submit that the evidence as contained in the extradition document has not been challenged by the respondent. There is a connecting factor between the respondent and the offences that he has been indicted on, for instance, through the affidavit of the special agent,” argued Mwaniki.

The trial was conducted before Chief Magistrate Martha Mutuku. She first allowed the police to detain Mansur as the trial proceeded on fears he was a flight risk.

The State submitted that Mansur had initially fled the country, and he held a Yemen passport that he could use to go on the run again if he was freed during trial. 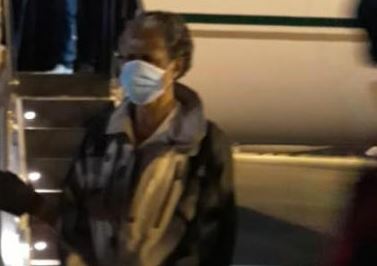 Mansur’s passport showed he had left the country through the South Sudan border, travelled through Sudan and finally found safe haven in Yemen until coronavirus hit the Arab country.

“The respondent only travelled back to Kenya from Yemen after the Government of Kenya assisted to repatriate Kenyans during the Covid-19 pandemic.

As such, the respondent was able to travel back through a chartered flight, an indication that he is a man of means,” the prosecutor said.

Mansur (above) unsuccessfully pleaded to be released on bail despite telling the court that he lived in Mombasa with his family and he had surrendered his travel documents.

The court heard that Uganda and Senegal had already extradited their nationals who were part of the same racket. Two Kenyan suspects–Abdi Hassan Ahmed and Badro–were on the run.

The State had a single witness, Ali Bashir Olow, who worked in the DCI’s anti-narcotics unit.

He told the court that after Interpol issued a Red Notice for Mansur, he was tasked with hunting him down. A Red Notice is a request to law enforcement worldwide to locate and provisionally arrest a person pending extradition, surrender, or similar legal action.

Asked whether there was a complaint by the Kenya Wildlife Services (KWS) on the suspect, Bashir said there was none.

“I did trace, identify and arrest the fugitive. I support the application to the extent of identifying, tracing and arrest. I am aware there is an extradition treaty between Kenya and the United States of America,” he testified.

Mansur did not call any witnesses to defend him. He instead requested to be tried in Kenya.

On December 17 last year, the court sealed Mansur’s fate and allowed the government to hand him over to agents from the Drug Enforcement Administration who were eagerly waiting to lay their hands on him. He was granted 14 days to appeal the decision, which lapsed as his lawyers sought orders that he be produced before the High Court in person.

Why Uhuru’s dithering could cost him grip of his backyard

Like the late former President Daniel Arap Moi, Uhuru has staked his neck out to influence the choice of his successor.