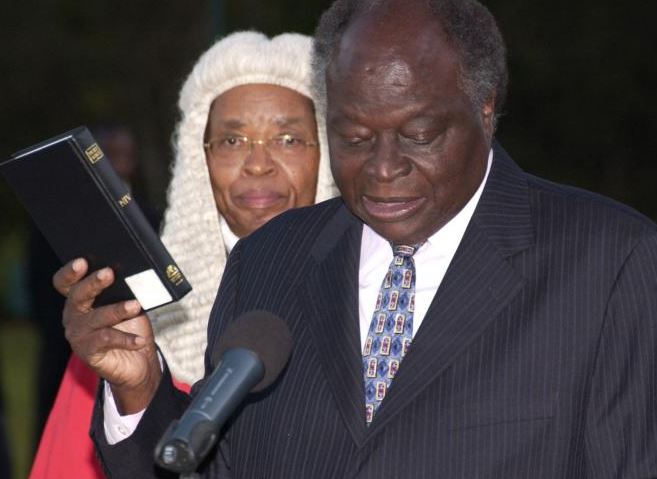 The former Chief Justice Johnson Evan Gicheru's (pictured- back left) demeanour was a contradiction in terms.

As the first Chief Justice of reformist era of former President Mwai Kibaki, which rode on the crest of the Narc wave, Gicheru set about redeeming the tattered image of the Judiciary, purging it off old order of graft and sleaze.

On the other front, however, was a man who slept through the revolution, and was eventually swept away by it. And here, the 2007 picture of him swearing-in President Kibaki after sunset and as the country burnt, distorts his record.

Although he would later clarify that he was merely fulfilling his constitutional duty, former Electoral Commission of Kenya (ECK) chair Samuel Kivuitu sold him away: "I took the certificate to the winner, and found everybody seated. The Chief Justice was there, all dressed up to swear-in the winner. What was I supposed to do?" Kivuitu said.

Gicheru, the longest-serving indigenous Kenyan Chief Justice, died on Christmas Day at the age of 79. He started his career in the Judiciary in 1982 as a High Court Judge, quickly rising to the peak as Court of Appeal judge in late 80's and before leaving in 2011 as CJ.

When former President Moi needed a judicial mind to unravel the mysterious death of his Cabinet minister Robert Ouko in 1990, he turned to Gicheru.

The Scotland Yard Detectives Unit had come and gone, when on October 2, 1990, Moi appointed the Gicheru-led Judicial Commission of Inquiry.

By all accounts, Gicheru seems to have taken his work seriously, taking evidence from 172 witnesses over a period of 246 days, and all in the open. Just like the Scotland Yard, Gicheru's efforts would amount to nothing as Moi dissolved the commission on November 26, 1991.

Gicheru's team must have been heading somewhere, for on the day it was disbanded, arrest orders were issued against former minister Nicholas Biwott, former Permanent Secretary Hezekiah Oyugi and former District Commissioner Jonah Anguka

Gicheru then went back to the bench, without a whiff of protest. And when President Kibaki floored Kanu's Uhuru Kenyatta in the 2002 General Election, Narc went shopping for a new Chief Justice while at the same time intimidating the then CJ Bernard Chunga.

Cocky and raring to hang on, Chunga eventually gave in when, on February 26, barely two months after swearing-in Kibaki, he was placed on the chopping board.

He resigned and Gicheru took over, overseeing the now infamous radical surgery where, it is metaphorically said, the patient died alongside the surgeon.

By the time Aaron Ringera was done with the scalpel, 23 of the then 45 judges were condemned as well as 82 of the 254 magistrates. Some were later acquitted after they opted to face the tribunals appointed to investigate them.

Coming with this reformist credentials, and after booting colleagues at the slightest whiff of injustice, it was therefore strange that Gicheru would in 2007, reverse the clock in a single day.

Five years before, Kibaki had been sworn-in in broad daylight at a public place, Uhuru Park, before cheerful masses and by a CJ who was said to have been a hatchet man for the system. 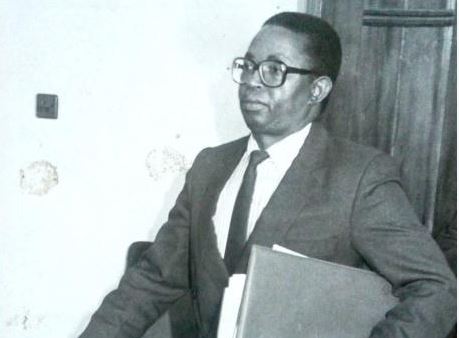 But on this occasion, with the reformist Gicheru (above) in charge, Kibaki was sworn-in at dusk, before a handful of State officials and amid violent protests following contested declaration of presidential election results.

Owing to the violence and interventions from outside, Kenya was placed on trajectory of political reforms. Gicheru played the ball quite well, facilitating constitutional and judicial reforms, and eventually made way for the new order.

He did not fight back the change, at least not publicly.

“If you read the Bible, Paul says there are those fiery darts of the evil ones not meant to hurt but burn and demoralise you.

"When you allow yourself to be demoralised, then you lose focus and there is no progress once you get demoralised,” he once told the Executive and a section of lawyers who wanted him out of office.

With his exit, the country's first competitively appointed CJ Willy Mutunga took over, complete with ear studs, the hallowed Chief Justice Chambers, Gicheru's former office. Gicheru was the last of judicial monarchs whose word was law.

After retirement, he led a quiet life at his home in Karen, Nairobi. Less than three years after his retirement, Gicheru, who was diabetic, went missing while holidaying at the Aberdare Country Club in Nyeri and was found lying in a thicket a few days later.

His death provoked an outpouring of grief and tribute from leaders who credited him for entrenching judicial independence.

"Chief Justice David Maraga eulogised him as a man who brought honour in the administration of justice and integrity in the Judiciary.

“He will forever be remembered for his role in entrenching judicial independence by ending the tradition where the Judiciary took instructions from the executive in the discharge of its daily functions,” said Maraga.

Gicheru died peacefully, as he had said, as he walked to his car on the day he left judiciary. "I have no regrets… I am now a free man. I can now go die peacefully."

Lessons for Kenya after global showpieces in July and August
Athletics
By Stephen Rutto
5 mins ago
Why you need to reduce your sugar in take now
Health
By Esther Muchene
27 mins ago
Brad Pitt's 'Bullet Train' leads as 'Top Gun: Maverick' flies back up ranks
Arts and Culture
By AP
52 mins ago
Premium Kenya's next president has his work clearly cut out for him
Politics
By Eric Nyakagwa
1 hr ago
.