Zoom blunders: They didn’t start with our Senate 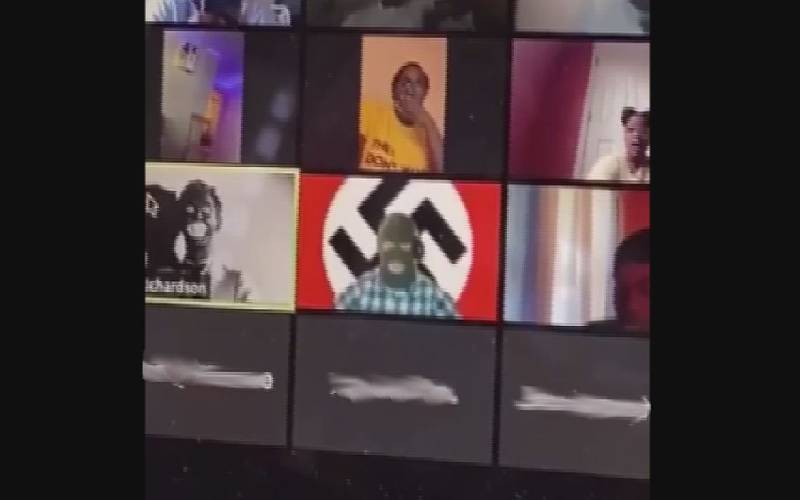 Video teleconferencing platforms such as Zoom have become essential to staying connected in the wake of the Covid-19 crisis, but as the platform’s popularity rises, it has come with a fair share of embarrassing moments and experienced hackers disruptions.

Zoom exploded in popularity since early this year as people turn to video calling software for school lessons, formal meetings and other events.

In Kenya, Parliament (the Senate and the National Assembly) has been holding committee meetings over Zoom to curb the spread of the virus.

Zoom has also become the new normal in our courts with hearings now being conducted online.

In Kenya, a parliamentary committee meeting ended prematurely after a senator inadvertently posted an indecent comment during a Zoom session.

The virtual meeting had been called to grill the directors of companies entangled in the controversial procurement of Covid-19 essentials to the Kenya Medical Supplies Authority (Kemsa).

But as the session was on, it would appear that some senators were using Zoom’s in-meeting chat feature to send private messages to each other.

One senator wrote “ni kama chairman amekula (name withheld)” (Looks like the chairman has slept with ...) and sent the message to the entire group.

The session was interrupted as all participants turned their attention to the in-meeting chat and the embarrassing message.

The exchanges show the humiliated chairman leave the Zoom meeting before other senators also left without saying anything like the one who had authored the text tried to apologise in vein.

Early this week, another embarrassing moment occurred during a Senate committee meeting convened to resolve the funding tiff between Nairobi Governor Mike Sonko and the Nairobi Metropolitan Services after Nominated Senator Beth Mugo forgot to mute her zoom link while making a phone call.

Sonko accused Senator Mugo of calling State House to inform them of what was transpiring in the meeting.

"She is calling State House to tell them what has happened here," Sonko shouted

The meeting, however, ended without the Senator being given an opportunity to defend herself against Sonko’s attacks.

In Uganda, the country was forced to recall its ambassador to Denmark and her deputy, after the pair were recorded plotting in a Zoom meeting to steal funds meant for the Covid-19 crisis.

In the video that went viral, Ambassador Nimisha Madhvani, her deputy and other staff members are heard devising a plot to share out money which was meant to aid stranded citizens.

They appear to suggest that instead of registering the money for Covid-19 use, it should be apportioned as an allowance over eight days for the diplomats.

In July, a South Sudan diplomat in the US was criticised online after he went to the toilet and began peeing while he was still participating in a Facebook panel discussion. The diplomat later alleged that the video was fake.

The video which went viral shows one of the panellists suggesting the ambassador be muted as he makes his way to the bathroom.

Panellists were discussing the newly-appointed governor of Upper Nile state when Gordon Buay, South Sudan’s deputy ambassador to the US, walked into the bathroom with the camera and phone of his device still active. He then began peeing with his video feed on.

Embarrassing!????????
South Sudan's ambassador to the USA #GordonBuay urinates during a live zoom discussion panel. I am still speechless....

A similar incident happened in the US in April after a woman accidentally left her camera on while on a video conference call - meaning her colleagues witnessed her going to the toilet in a viral video widely shared on Twitter.

In the video, the woman is seen removing her trousers and sitting on the toilet - leaving her workmates in fits of laughter during the session.

In the Philippines, a government official accidentally joined a zoom meeting while having sex with his secretary in the office.

The randy official thought he had left the meeting after he mistakenly pushed the wrong button.

In the viral video, the officer is seen walking towards a woman seated on the sofa not far from the computer and started doing their thing as their stunned colleagues watched on.

In Spain, a politician resigned after accidentally broadcasting himself having a shower during a live-streamed council meeting.

As the 8 am meeting stretched into its fifth hour, councillor Bernardo Bustillo out of time, but still in the discussion decided to bring his laptop into the bathroom and, in a nightmare-inducing error, minimise the video conference, in the mistaken belief that he would not be visible to his colleagues, journalists and members of the public watching on local television.

Zoom has also been targeted by hackers who spam sessions with inappropriate content forcing education institutions that had adopted its use for online classes to go back to the drawing board.

In May, Braeburn School suspended use of Zoom after it emerged that some of the students shared the private links with outsiders.

In an email to parents, the school said, “We have identified a pattern and, unfortunately, a minority of our students have been sharing confidential links with people outside the school.”

St Austin’s Academy in Lavington, which had a similar incident, said the breach was caused by “inconsistent settings” on the platform and that it had made the necessary adjustments.

Previous article
Sh170, 000,000 paid out! Join the Mozzart bet club of multi-millionaires
Next article
Homa Bay man kill self over claims of visits by late granny

Zoom's Christmas gift: no cap on call lengths over the holidays