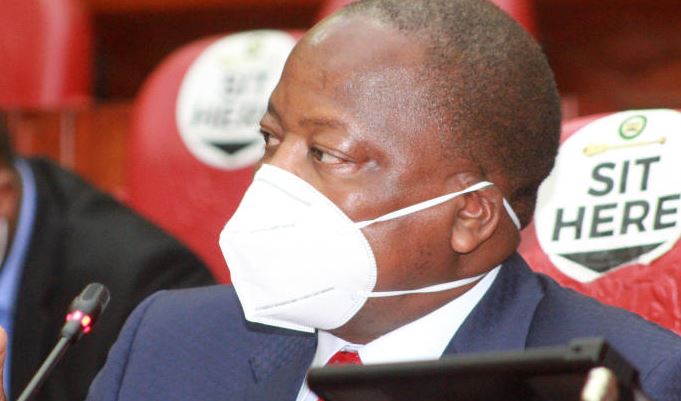 Health CS Mutahi Kagwe (above) is the latest senior government official to be dragged into the alleged misuse of coronavirus funds after he was named as one of those who pressurised the medical supplies agency to award tenders for purchase of items required to fight the pandemic.

Kagwe was named alongside his Principal Secretary Susan Mochache, and another member of the Covid-19 Emergency Response Board only identified with his military title, as having pressured Kenya Medical Supplies Agency (Kemsa) into disregarding procurement rules.

Suspended Kemsa CEO Jonah Manjari told the joint Senate Health and Ad Hoc Committee on Covid-19 that he was receiving numerous calls, short text messages and emails from the trio to award tenders for the provision of various items.

The committee grilling of Kemsa officials on the alleged misappropriation of Covid-19 funds.

One of the questions that Manjari was to answer was why he exceeded the budget in his spending.

He was at pains to explain to the lawmakers why he went on a spending spree, committing more than Sh7.6 billion to procurement of the items without clearance from the board.

He told the committee co-chaired by Trans Nzoia Senator Michael Mbito (Health) and his nominated counterpart Sylvia Kasanga (Ad Hoc on Covid-19) that they were responding to an emergency pandemic and that there are certain items that had to be procured to save lives.

“We got various requests from the Health CS, the PS Susan Mochache and a member of the Covid-19 Emergency Response team. The requests came through phone calls, text messages and even emails,” Manjari said

He said that at some point, the Emergency Respond team visited Kemsa and asked for specific items which they didn’t have at the time and asked them to award tenders.

“We were responding to an urgent need and there was a lot of pressure from all over to procure Covid-19-related items,” he said.

But Senators Ledama Ole Kina (Narok), Fred Outa (Kisumu), Okong’o Mogeni (Nyamira) and Ibrahim Ali (Wajir) pressed Manjari to explain why he ignored the opinion of the Procurement Director to stop tendering since the agency had long passed the budget plan.

“You ignored the opinion of the director of procurement. The board had done a direct procurement of Sh4 billion and in May he again wrote to you not to do a direct procurement and in June, you exceeded the budget to the tune of Sh7.6 billion. Why did you ignore the professional advice of your officer?,” posed Ledama.

Manjari said at the beginning of the pandemic in March, there was no budget. At the time, he said, there was only one supplier of the N95 face masks which were for the Multi-Drug-Resistant (MDR) patients.

He also disclosed there were very few companies with the capacity to supply the masks which were being used by the health workers responding to the pandemic. He said they agreed with the suppliers to ensure that the masks were in Kenya by July.

Nominated Senator Abshiro Halakhe asked Manjari to be bold enough to tell the country how the alleged misappropriation at the medical supplies agency happened.

Kalro supports the vaccination of goats against pneumonia
Coast
By Renson Mnyamwezi
14 mins ago
Somalia airspace regains Class A status after 30 years
Africa
By VOA
27 mins ago
Migori banks on automation of payment methods to lift revenue
Nyanza
By Anne Atieno
37 mins ago
Bayern in turmoil ahead of PSG duel
Football
By Xinhua
47 mins ago
.

By Renson Mnyamwezi 14 mins ago
Kalro supports the vaccination of goats against pneumonia
.